Who’s a pretty boy, then?

The world’s largest ever species of parrot has been discovered by palaeontologists in New Zealand – and it is fair to say the monster would not have been sitting on anyone’s shoulders.

Heracles inexpectatus – so named because of its sheer size – stood 3ft tall and weighed more than one stone. Its beak would have been so strong, experts say, that it could have cracked open almost anything it chose to eat – and that may well have included smaller parrots.

It was found as part of a mass excavation near the town of St Bathans, on New Zealand’s South Island, in an area famed for its fossils. 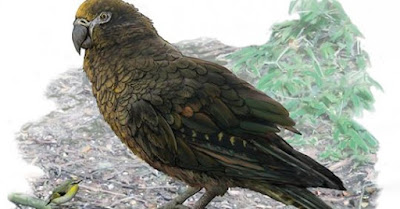 “New Zealand is well known for its giant birds,” said Trevor Worthy, associate professor with Flinders University, in Australia, which is coordinating the excavation along with the University of New South Wales, also Australia, and Canterbury Museum. “Giant geese and adzebills shared the forest floor, while a giant eagle ruled the skies.

“But until now, no one has ever found an extinct giant parrot – anywhere.”

The fossil, which dates back 19 million years, is roughly twice the size of the endangered flightless New Zealand kakapo bird, previously the largest known parrot.

Like the kakapo, the extinct giant was a member of an ancient New Zealand group of parrots that appear to be more primitive than their descendents today.

“We have been excavating these fossil deposits for 20 years, and each year reveals new birds and other animals,” said Prof Worthy. “While Heracles is one of the most spectacular birds we have found, no doubt there are many more unexpected species yet to be discovered in this most interesting deposit.”

Mike Archer, professor at UNSW, added: “Heracles, as the largest parrot ever, no doubt with a massive parrot beak that could crack wide open anything it fancied, may well have dined on more than conventional parrot foods, perhaps even other parrots.”

The creature lived in a diverse subtropical forest where many species of laurels and palms grew along with podocarp trees, added Suzanne Hand, also a professor at UNSW.

“These provided a rich harvest of fruit important in the diet of Heracles and the parrots and pigeons it lived with,” she said.

As well as the dodo, there has been another giant pigeon found on Fiji, a giant stork on Flores, giant ducks in Hawaii, giant megapodes in New Caledonia, and giant owls in the Caribbean.

(Source: Independent)
Posted by Arjunpuri at 08:00