‘Something’s very wrong with our railways’

The exorbitant cost of UK rail travel has been highlighted again after a passenger shared a picture of his return rail journey from Stockport to London, costing £287.10.

Editor and writer Ben Hoare posted a snap of the Virgin Trains ticket on Twitter with the caption: “Given how much my Stockport-Euston day return (booked a week ago) cost, is it any wonder this Virgin Train is half empty? Something’s v wrong with our railways.” 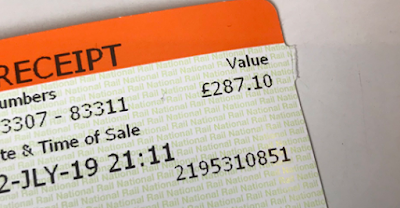 He added: “I think this shows trains are way too expensive and ticketing too complicated. The sad thing is, we invented railways.”

A return flight from London to New York with low-cost airline Norwegian can be purchased for less than Hoare’s train ticket price, with October returns available from £285 to travel the 6,950 miles. A journey from Stockport, in Greater Manchester, to London and back is 310 miles as the crow flies.


Given how much my Stockport-Euston day return (booked a week ago) cost, is it any wonder this @VirginTrains is half empty? Something’s v wrong with our railways @helenpidd @AndyBurnhamGM pic.twitter.com/ml4orqXHKO
— Ben Hoare (@benhoare5) 30 July 2019


Jean Thierry wrote: “Mediocre service on dirty outdated rolling stock with little or no compensation available for poor service. This is the downside of letting private companies run the railways. Actually there isn’t an upside for the traveller. Railways in most other EU countries are state owned.”

While some commenters pointed out that train prices differ vastly depending on which service you book, and that passengers can get a good deal if they travel off-peak or try split-ticketing, others countered that commuters shouldn’t be penalised for needing to travel at certain times.

“I see you have been plagued by the split ticketing bores. And the know-it-alls who say you could have got a cheaper train if you had got a different train at a different time and booked on a different date,” replied Helen Pidd, the Guardian’s north of England editor.

According to The Independent’s research, a same-day return between Stockport and London on peak services, booked for travelling today, costs £350. This works out as £1.12 per mile.

The best price The Independent could find online was £48 return (£24 each way) for advance tickets on certain services in September and October.

A Virgin Trains spokesperson said: “The vast majority of our customers take advantage of our discounted tickets, with fares between Stockport and London starting at £24. These great value fares are one of the reasons we’ve won almost all the market share between the northwest and London from airlines and why we’re seeing record numbers travelling on our trains.”