We need to do much, much more to live greener lives. For that we are going to need greater financial incentives and penalties

The nudge worked then. We now use 93 per cent fewer plastic bags than we did before the introduction of the 5p carrier bag levy went nationwide in 2015 (Wales pioneered the levy in 2011). When the levy goes up to 10p next year it will further curtail their use, and as such the waste of precious hydrocarbons and the obscene environmental damage sometimes across oceans in otherwise pristine marine environments, choking turtles and all the rest of it.

According to the government, on a 10-year view the carrier bag levy – which is not a tax – will mean an expected overall benefit of over £780m to the UK economy; up to £730m raised for good causes; £60m savings in litter clean-up costs and a carbon saving of £13m. Some 4p of every 5p you spend on a bag goes to a “good cause”. It goes to show, by the way, how simple insights from behavioural economics can leverage big societal changes – the levy being effectively financially invisible to almost everyone.

Well, we can do much more, such as introducing pilot levies on disposable coffee cups (with a suitable exemption for smaller cafes, obviously), on plastic straws and various other bits of our plastic fanatic lifestyle. I believe the civil servants at the Department for the Environment, Food and Rural Affairs found the whole thing so perplexing they’ve not been able to work out a suitable scheme. As Boris Johnson might say, if we could put three men on the moon in 1969, we can surely find a way to put a price on plastic straws. We can also do much more for food recycling – supplanting the food banks with fresher, healthier produce.  Maybe Theresa Villiers will have more luck than Michael Gove had. 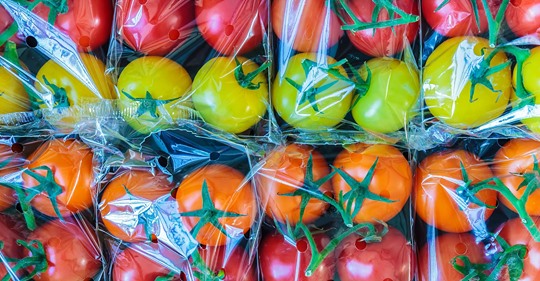 Indeed, we could go for a generalised plastics tax – a small deterrent levy on the absurd amounts of plastic and other packaging that we cosset so much of our fresh food in. If your food is wrapped in any kind of plastic it will be, say, 10p more expensive than if it is loose or in a paper bag or a compostable organic bag.

Not that I’m showing off or anything but before me I have four white flesh doughnut nectarines from Marks & Spencer – a small but potent symbol of the power of capitalism to satisfy consumer needs we dreamed of having. Leaving aside for moment their vast carbon footprint, having travelled all the way from Spain, I find them swaddled in cellophane (I think that’s what it is) and coddled by a dark cardboardy tray, cupping their royal lusciousness from bruising. And yet nowhere can I see a guide as to which bits are reliable, and how I should go about recycling this packaging. If it would save the planet, I’d be glad to put up with an occasional bruised doughnut nectarine, even one in the early stages of necrosis, on the Theresa May principle that you just cut out the rot and use the rest (a notion that she might have applied more vigorously to her own cabinet).

There are in fact some 58 different recycling symbols, and they are poorly understood by the public. Some councils will take anything that’s vaguely recyclable; others are fussier. Some ask you to stick it all in a general recycling bag; others demand you carefully parse all the different types, and then, if needs be, travel to special recycling centres for the more recherché garbage. Never having been much cop at science, I am not sure that I can easily tell my polyethylene terephthalate from my high-density polyethylene or my polyvinyl chloride from my low-density polyethylene, polypropylene, polystyrene or, well, Polly put the kettle on.

Unless you’ve got a degree in organic chemistry, you’ve pretty much had it in the UK’s wild kaleidoscope of recycling regimes. A stray crisp packet or a few old cans in with the paper recycling can basically render it useless, worthless. It is one reason why the Chinese and Malaysians are telling us that they no longer want our recycling material because the poor befuddled British consumer keeps putting the wrong kind of metals/plastics/paper/organic materials in the wrong bags and bins, and when they open it all up in Shanghai and KL they just want to send it back to us. “Global Britain” can’t even export decent rubbish, it seems.

We should always be clear; recycling is not going to save the planet. It will merely delay its inevitable demise, and by a relatively insignificant amount in the great cosmic scheme of things. The real problem is our vast over-consumption of everything, and, of course, in such an unsustainable way. So we need to do much, much more to live greener lives, and for that we need more financial incentives (and penalties).

So the obvious answer is to deter the use of plastics, especially, in packaging in the first place. We could all make the effort to buy our groceries fresh and loose – like we used to and I still do down the local market – and, if we can’t or won’t, have some kind of levy placed on them because they are worsening the climate emergency. It would not be a tax on food, ie on the poor, because there should always be an unwrapped option. Market forces, in other words, nudged by a small financial incentives could do for the wider plastic problem what the 5p levy did to end the plastic bag menace.

(Source: Independent)
Posted by Arjunpuri at 10:00