Recovering from coronavirus is a really long, grim process and I'm not dealing with it very well

It’s now day 39 since the plague said, 'Hi there, I’m here to muck you up. See that body of yours? I’m going chew it up and spit it out and leave you with the mother of all hangovers. Three, two, one, ka-boom'

Bleurrgh has become my new favourite word, and FFS my favourite phrase.

The former describes the way I feel most days while recovering from Covid-19, the latter encapsulates the frustration this produces.
It’s now day 39 since the plague said “Hi there, I’m here to muck you up. See that body of yours? I’m going chew it up and spit it out and leave you with the mother of all hangovers. Three, two, one, ka-boom.”

“Hangover” is a good word, because lots of people will have either experienced them, or, if they don’t drink, will have witnessed people experiencing them. So they should be familiar with the symptoms.

The aftermath of Covid-19 has many similarities: headache, nausea, fatigue, shortness of breath. Plus a brain fog which has roughly doubled the length of time it takes me to write a column like this. Concentrating for longer than 15 minutes feels like walking through a swamp in a pair of trainers. 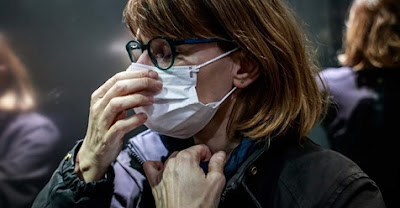 The main difference with a hangover, apart from the fact that they’re usually over after a day or so, is that they tend to respond to things like bacon sandwiches, or jacket potatoes with melted cheese and baked beans. Comfort food in other words.

The Covid-over doesn’t. My appetite has been zapped. That probably isn’t the worst thing in the world because I wasn’t exactly slim before it started and exercise is not something my body is currently willing to allow me to indulge in. Just making a mushroom omelette feels like a sparring session with Tyson Fury.

My wife is in the same boat. We’d be in real trouble if we didn’t have a nine-year-old who’s taken it upon herself to play the role of district nurse on the bad days, which are less frequent but still have a habit of roaring in at inconvenient times.

This situation is far from unusual, according to my GP, and the words he used left me feeling like I did when trying to get to sleep after illicitly watching the Salem’s Lot mini-series as a kid (it was really scary then, honest). For the record, he said: “It might take as long as eight weeks.”

I’ve also had some nice people tweeting me – they do exist on Twitter – talking about their experiences on day 46, or even beyond day 50, which bears that out.

In one way, their experiences make me shudder. But they’re also kind of helpful. You could say it’s because misery loves company. I’d argue, rather, that it’s comforting to know that you’re not alone, not weird, not imagining it, as some self-righteous blowhards will doubtless be inclined to suggest.

The stories of those of us for whom recovery is a long, gruelling process have been under reported.

I can understand that. People are dying, and in greater numbers than we had ever anticipated, thanks to the godawful mess the government has made of handling this.

Honestly, I never thought I’d become a fan of Piers Morgan, but watching him chuck bricks at the ministers who were asleep at the wheel and let the prime minister run riot is like popping a couple of paracetamol with one of those fizzy vitamin C tablets: an effective palliative indeed.

Nonetheless, our grim and long experience needs more of an airing.
“Please keep writing about this,” was a common response to the first piece I wrote about my “moderate” case. So I know there’s a demand out there.

Partly it’s because we need understanding, from family and friends, but also, crucially, from policymakers and employers.

My productivity might have fallen, but I can at least accomplish something from an easy chair with a duvet draped over me, so the latter has not been an issue.

However, I shudder to think what it’s like for someone who works in a warehouse and who might be tempted to turn up through force of necessity (even though I think I might collapse were I to try something like that).

Not to put too fine a point on this, but tests have revealed people displaying the symptoms my wife and I are displaying may be infectious several weeks in. So we may not represent the worst cases out there, but we’re not out of the woods, and we certainly don’t want other people experiencing what we’re going through. Or worse.