‘We run the risk of a serious environmental reverse during this crisis’, former environment agency chief warns

The Brazilian government is seeking to use coronavirus as cover to usher in laws which could lead to increased occupation of indigenous lands and deforestation in the Amazon, campaigners and experts allege, amid warnings that further environmental disruption may lead to new pandemics.

The country has been divided on the severity of Covid-19, with president Jair Bolsonaro dismissing it as “a little flu” and opposing lockdown measures, for which public support is waning, despite mass graves being dug in Sao Paulo in the face of rising fatalities.

While the crisis has seen most industries grind to a standstill, government data suggests deforestation in the Brazilian Amazon rose 30 per cent in March compared to the same period last year, with the most recent data suggesting the trend has continued in April.

There has also been a reported increase in forays into some indigenous lands by miners and land-grabbers, as both civil and official protection efforts are scaled back for fear of infection. 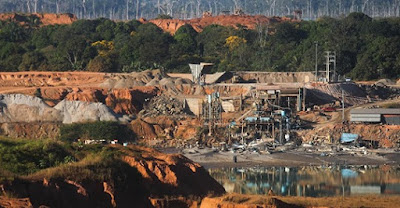 Against this backdrop, scientists are issuing renewed warnings that ecological disruption can increase the chance of novel infections crossing over to humans – known as “zoonotic” diseases.

“Approximately one in three outbreaks of new and emerging illnesses is linked to changes in land use, like deforestation,” Peter Daszak, president of EcoHealth Alliance, told Mongabay.

Dr Daszak was lead author in a vast US government-backed study published in 2019 which noted that HIV, Ebola and Zika virus are all “diseases causally linked to land change use”.
Some experts suggest the Amazon is a particularly high-risk location for novel outbreaks.

“Where you have a huge biodiverse zone, the Amazon, and then you have an encroaching human footprint, through urbanisation, road networks, deforestation, extractive industries like logging and mining, you have all of the ingredients for a virus spillover recipe,” David Wolking, of the University of California’s One Health Institute told Greenpeace’s investigative arm, Unearthed.

Wildfires, often caused by slash-and-burn deforestation tactics, can also play a role in the emergence of new diseases.

With the Amazon suffering its worst fire season in a decade in 2019, more than a dozen international experts convened to offer a stark warning.

“The Amazon region of Brazil, endemic for many communicable or zoonotic diseases can, after a wildfire, trigger a selection for survival, and with it change the habitat and behaviours of some animal species,” they wrote. ”These can be reservoirs of zoonotic bacteria, viruses, and parasites.”

As a result, the 120-day Provisional Measure (MP) 910, decreed by Mr Bolsonaro in December, may now be passed as a permanent measure within the next three weeks without being subjected to typical levels of debate and scrutiny, environmentalists allege.

The Bolsonaro administration has said the new land ownership rules will grant legal titles to farmers who have occupied federal lands in a “tame and peaceful way for many years”, enabling them to “rise above subsistence farming and improve their income”.

It insists the new law in “no way” facilitates land-grabbing or deforestation, arguing that new landowners will be held strictly accountable for the preservation of up to 80 per cent of their land.

But analysts warn that the new legislation allows huge swathes of land illegally cut down and occupied before 2018 – often by criminal gangs – to be legally seized by land-grabbers using evidence of their illegal activities as proof of their occupation.

Meanwhile, a new rule called IN 09, passed last week by the government’s indigenous agency Funai, strips yet-to-be-demarcated but indigenous lands of their designation as “indigenous” in the land registry, according to Greenpeace.

Roughly a third of all indigenous land is not yet demarcated, the group says. In 2019, the BBC reported that more than 800,000 indigenous people lived in 450 demarcated indigenous territories, which accounted for 12 per cent of the country’s total land area.

These new changes will allow people occupying indigenous land – usually for the purpose of deforestation and agriculture or mining – to obtain a certificate that the land is undemarcated.

Under the proposed new law, MP 910, this certificate could then be used in support of a land-grabber’s claim to legalise property on that land, and eventually purchase for a fraction of the value without bidding against other parties.

The former head of the country’s environment agency has also warned that sections of the proposed law which supposedly benefit small farmers – by scrapping the need for official inspections of land under 2,500 hectares ahead of a potential acquisition – could be exploited as loopholes by large-scale land-grabbers.

The government says it will stop proxy ownership by larger parties – who it is feared could use small landowners to acquire it for them without official assessment - by banning the sale of newly acquired land for the first 10 years.

“With this flexibility, and without separating big landowners from small ones, this law legalises those who live from land invasion, deforestation and the sale of public land,” Suely Araujo, former president of Ibama, told Mongabay.

She added: “If there isn’t a political decision to withdraw MP 910 from the measures to be voted through, we run the risk of a serious environmental reverse during this [health] crisis.”

The 2018 cut-off date would be the second extension of an initial 2004 cut-off, which campaigners fear would embolden land-grabbers with the promise of continually renewed amnesty for past crimes.

As a result, the new law could lead to the deforestation of an additional 1.6 million hectares – an area larger than Yemen – by 2027, conservation research organisation Imazon estimates.

“If passed, it would be a hard blow against any hope that there will be any regaining control and fighting deforestation,” Brenda Brito, a lawyer and researcher at Imazon, told Unearthed.

“It will, in fact, be the end of that hope, if anyone is still hopeful that the current government will actually face and fight deforestation. Because this measure will end up stimulating even more than is happening now.”