Man shares shocking before and after photo of body after coronavirus

A 43-year-old nurse has shared a photo of his shocking weight loss after being sedated and intubated for six weeks while battling coronavirus to show the impact the virus can have on the body.

Mike Schultz, from San Francisco, had no underlying health conditions, worked out multiple times a week and weighed 190lbs before he contracted coronavirus.

After fighting the virus from a hospital bed for six weeks, Schultz, who shared his before-and-after photo on Instagram from the recovery ward, told BuzzFeed that he weighed just 140lbs.

“I wanted to show everyone how badly being sedated for six weeks on a ventilator or incubated can be,” Schultz captioned the photo of his 50lb weight loss. “Amongst other things, Covid-19 reduced my lung capacity with pneumonia.”

Even taking the photo was exhausting, according to Schultz, as he struggled to hold his phone. 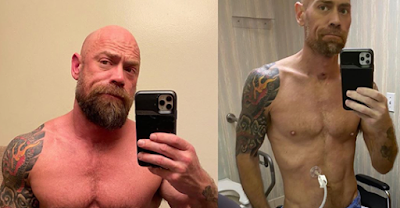 "I was so weak. This was one of the most frustrating parts," he told BuzzFeed. "I couldn’t hold my cellphone; it was so heavy. I couldn’t type, because my hands shook so much."

According to Schultz, he wanted to share the picture as a reminder that anyone can get coronavirus, regardless of age or pre-existing health conditions.

“I knew what I thought going in [about the coronavirus]. I didn’t think it was as serious as it was until after things started happening," he said. "I thought I was young enough for it not to affect me, and I know a lot of people think that.

“I wanted to show it can happen to anyone. It doesn't matter if you're young or old, have pre-existing conditions or not. It can affect you."

Schultz said he and his boyfriend Josh Hebblethwaite had attended the music festival Winter Party Festival in Miami Beach, which took place from 4 to 10 March prior to getting sick.

According to Schultz, while he knew coronavirus was “out there,” he said there “were no real restrictions in place” at the festival.

Schultz first started feeling sick and displaying symptoms including a fever and difficulty breathing a week after the festival, after travelling to Boston to stay with Hebblethwaite.

Shortly after being admitted to the hospital, doctors said Schultz would likely have to be intubated, which he said “freaked me out”.

Since being released from the hospital and sharing the photos, Schultz told BuzzFeed some of the response has been negative, from people who suggested he shouldn’t have gone to Winter Party in March when most people were aware the virus was spreading.

A majority of the comments from Schultz’s more than 32,000 followers have been positive, however.

“You will rebound fast. I’m sure of it, Mike!!” one person commented, while another said: “Appreciate the warning. You’re the man. Get well soon.”

n the US, there have been more than 1.56m confirmed cases of coronavirus, according to the latest figures.