Adolf Hitler: How the Nazi dictator met his death 75 years ago and brought the Second World War to a close

Adolf Hitler took his own life on 30 April 1945, dying in ignominy in an underground shelter at the Reich Chancellery two days after his fascist ally Benito Mussolini had been assassinated by partisans in the small northern Italian village of Giulino di Mezzegra.

With the Western Allies days away from retaking Europe, Poland in the hands of the advancing Red Army and Berlin under relentless siege, the Fuhrer was forced to concede his vision of founding a new empire to last a thousand years lay in tatters, his hope of global conquest for the greater glory of the Teutonic “master race” doomed to end in failure. 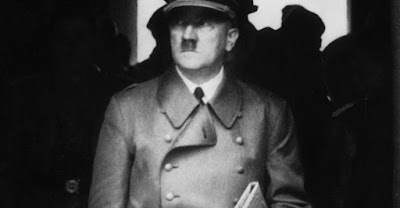 He shot himself through the right temple with a 7.65mm Walther PP pistol, biting down on a cyanide capsule as he did so to ensure there would be no question of his survival.

His wife, Eva Braun – whom he had married a day earlier in their dank subterranean rooms – followed suit, ensuring that neither would have to face capture by the Russians or answer for the unprecedented atrocities carried out by the Third Reich under his direction.

Hitler, Braun, propaganda minister Joseph Goebbels, his wife Magda and their six children, plus members of the party’s trusted inner circle and staff had taken up residence in the Fuhrerbunker on 16 January as the once-mighty German army found itself pushed to the verge of collapse after six years of devastating conflict.

Each subsequent day had brought more news of steady British and American progress into Nazi-occupied territory from the west and the unstoppable march of Soviet troops to the east.

By 16 April, the Russians had arrived to commence the Battle of Berlin, bringing 2.5 million men and 6,525 tanks to the doorstep of the world’s third-largest city on three fronts, commanded in turn by marshals Georgy Zhukov, Ivan Konev and Konstantin Rokossovky. The exhausted Nazis were outnumbered and outgunned five-to-one with little serious hope of defending the capital, reliant on flimsy barricades thrown up in desperation to fend off invasion.

“It would be much better to have me shot,” remarked General Helmuch Weidling when he was tasked with mounting a last stand to save Berlin.

On 20 April, Adolf Hitler made his final appearance above ground as he emerged from the sanctuary that had become his prison to hand out the Iron Cross to members of the Hitler Youth, among the devastated remains of what had been the Chancellery’s garden.

It was his 56th birthday and the last time he would feel the brush of sunlight against his cheek. The occasion was marked by Russian soldiers firing on Hermannplatz and killing a number of people queueing outside the Karstadt department store.

“Through the fire-blackened ruins the scent of lilac rose in waves out of derelict gardens whose owners had fled or died,” Douglas Botting wrote of that spring in In the Ruins of the Reich (1985). “Crocuses struggled out of the rubble. The stumps of trees amputated by the bombing were bursting with green leaf. Only the birds were missing. There were no sparrows in the eaves, no thrushes singing in the Tiergarten.”

With only the hammering of saturation bombing by the Allies to listen out for, Hitler had suffered a total nervous breakdown on 22 April after becoming certain of defeat when he learned that Waffen-SS general Felix Steiner had disobeyed a direct order.

Steiner’s detachment had been instructed to attack Zhukov’s forces encircling the city from the north while the German Ninth Army under Theodor Busse approached from the south in a pincer movement. Steiner had baulked at so unrealistic a command, anticipating the massacre of his already-depleted forces, and declined to act on it.

“Hitler had been incarcerated in the bunker for over three months and his grasp on reality was fading fast,” writes Botting of the Fuhrer’s feverish state of mind. “Yet the palsied, enfeebled, prematurely aged old man in a soup-stained uniform living deep under the ground of the Reich Chancellery gardens continued to demand absolute obedience and fanatical resistance [and] continued to shriek nonsensical orders to non-existent or half-exterminated armies.”

Ranting tearfully and admitting the war was lost for the first time, the Fuhrer consulted his physician, Dr Werner Haase, later that same afternoon on the optimum means of committing suicide. It was Dr Haase, himself dying of tuberculosis, who recommended pistol-and-poison as the only truly foolproof method.

When Luftwaffe supreme commander Hermann Goering heard of Hitler’s outburst from Berchtesgaden, Bavaria, he dispatched a telegram asking him to step down in accordance with a 1941 decree naming Goering his successor.

Persuaded by his secretary Martin Bormann that the Reichsmarschall intended a coup, Hitler had Goering relieved of his post, arrested by the SS and threatened with execution. Field Marshal Robert Ritter von Greim was summoned from Munich to replace him.

On 23 April, Eva Braun wrote to her sister Gretl, sending gifts of coffee and tinned food for their parents and giving instructions for the disposal of her gold and diamond watches, photograph albums and her love letters.

Within a week Berlin’s telephone lines would be dead, leaving short-wave radio transmitted from a tethered balloon the only means of communication between the bunker and the outside world.

The city’s streets continued to face heavy bombardment from Russian artillery fire, with the native citizens who had not succeeded in escaping left with little choice but to seek shelter in basements and candle-lit subway tunnels. The hospitals overflowed, supplies were scarce, disease and petty crime were rife and the only meat available was that which could be carved from dead horses.

At 9pm on 28 April, a BBC report citing Reuters reached Hitler that Reichsfuhrer-SS Heinrich Himmler had approached the Allies with an offer to surrender, mediated by Swedish diplomat Count Folke Bernadotte. It had been declined but Hitler was infuriated that Himmler had assumed the authority to negotiate, branding him a traitor to the Fatherland and having his representative in Berlin, Hermann Fegelein, shot by firing squad in revenge.

That fact that Fegelein had married Gretl Braun and was therefore Hitler’s prospective brother-in-law did nothing to stay his hand.

General Hans Krebs and Bormann made desperate final appeals to Field Marshal Wilhelm Keitel and Admiral Karl Donitz respectively to order their commanders to make a final push against the Soviets but, in truth, all was lost. The Russians had reached Potsdamerplatz, a single city block away from the Fuhrerbunker, while Busse’s Ninth Army had been brutally cut down on the Berlin-Dresden autobahn.

“Reich Chancellery a heap of rubble,” Bormann admitted in a telegram.

In the early hours of 29 April – and shortly after poisoning his beloved Alsatian dog Blondi and handing out cyanide pills to his secretaries, who concealed their mounting panic behind subservient smiles – Hitler married Braun in a civil ceremony witnessed by their peers and toasted half-heartedly with glasses of champagne, after which the dictator made out his last will and testament.

Hitler spent the rest of that day putting his affairs in order, giving instructions for his papers to be destroyed and saying farewell to his entourage, shaking hands and mumbling whatever words of consolation he could muster. Gertrude Junge, one of the secretaries, later remembered tears in his eyes: “They seemed to be looking far away, beyond the walls of the bunker.”

Historian William L Shirer recounts that, after the dictator retired to bed, “a curious thing happened. The tension which had been building up to an almost unendurable point in the bunker broke, and several persons went up to the canteen – to dance. The weird party soon became so noisy that word was sent from the Fuhrer’s quarters requesting more quiet”.

On his last morning on earth, a pallid Hitler is said by biographer Hans-Otto Meissner to have greeted Magda Goebbels, the Nazi Party’s unofficial “first lady”, by taking the gold party insignia from his grey overcoat and fastening it to her lapel with trembling hands, prompting her to burst into tears at the honour. It was the highest recognition ever awarded to a woman by the Third Reich.

The bodies of Adolf and Eva Hitler were discovered at 3.30pm that afternoon slumped on a bloody sofa by Joseph Goebbels, Bormann, Hitler’s adjutant Otto Gunshe and his valet, Heinz Linge.

The latter was so shocked by the sight he simply picked up a Dresden vase Hitler had upset when his body had slumped forward from the fatal gunshot, rearranged the tulips and daffodils within and returned it to its rightful place on a side table, the Fuhrer’s favourite portrait of Frederick the Great of Prussia glowering down upon the scene.

Their cadavers were swiftly wrapped in brown army blankets, doused in petrol and burnt in a trench in the same Chancellery grounds where Hitler had received the boy soldiers two weeks previously, just as his will had dictated. “I don’t want to be put on exhibition in a Russian waxworks,” he had told Gunsche, anticipating his eventual cremation.

Donitz and Goebbels succeeded Hitler as head of state and chancellor respectively. The latter and his wife would have their children put to sleep by lethal injection just a day later. It is believed that Magda administered the poison herself, a chilling act she appears to have plotted at least a month in advance.

She had confided as much to her sister-in-law from her first marriage, Ello Quandt, according to Anja Klabunde’s 1999 biography: “We have demanded monstrous things from the German people, treated other nations with pitiless cruelty. For this the victors will exact their full revenge. We can’t let them think we are cowards.

“We will take the children with us, they are too good, too lovely for the world which lies ahead. In the days to come Joseph will be regarded as one of the greatest criminals that Germany has ever produced. His children would hear that said daily, people would torment them, despise and humiliate them.”

Frau Goebbels wept but nevertheless played Solitaire with her husband after going through with the executions, all six of their offspring lying unwaking in their beds in matching white nightgowns. Their parents too would be dead within hours, their end mirroring the demise of the Hitlers.

Berlin surrendered to the Soviet Union on 2 May, the same day that the US armed forces newspaper, Stars and Stripes, carried the news of the Fuhrer’s suicide and succession in the plainest terms imaginable, its headline announcing simply: “Hitler dead”.

Germany’s total concession would follow six days later on a date now marked as Victory in Europe Day. But the true extent of the horrors with which Adolf Hitler’s name will forever be associated would only subsequently become known to the wider world, which, in that moment, came together to cheer his downfall in jubilant celebration, daring to imagine a brighter tomorrow.