Coronavirus: Young people 'most likely to lose work' in lockdown

Young people are most likely to have lost work or seen their income drop because of Covid-19, a report suggests.

More than one in three 18 to 24-year-olds is earning less than before the outbreak, research by the Resolution Foundation claims.

It said younger workers risk their pay being affected for years, while older staff may end up involuntarily retired.

The number of people in the UK claiming and receiving unemployment benefit soared last month.

Separate ONS figures showed UK unemployment rose by 50,000 to 1.35 million in the three months to March.

Jonathan Athow, from the ONS, said employment "held up well" in March, but hours worked "fell sharply" towards the end of the month - particularly in areas like hospitality and construction.

Young people tend to be hardest hit by economic slumps.

Around a quarter of 18 to 24-year-olds have been furloughed - meaning they do not work but their firms keep them on their books and the government covers 80% of their wages.

A further 9% have lost their jobs altogether - the highest figure out of all age groups.

Industries that traditionally employ younger staff such as pubs, restaurants and leisure centres have remained shut throughout the UK's eight-week lockdown, as have many shops.

Employees across all age groups were found to be more likely to earn less than they did in January than earn more.

Those aged 35 to 44 were the least likely to have been furloughed or lost their jobs, with around 15% experiencing this since the outbreak began. 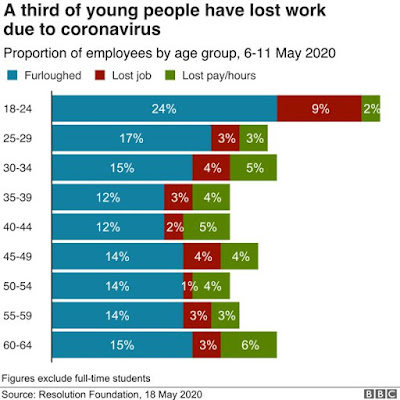 Ms Coffey told the BBC's Today programme that the UK should be prepared for the unemployment rate to "increase significantly".

She said the government is focusing on the younger generation as part of efforts to get people back into work.

Asked about the claim that their incomes could be scarred for years to come, she said: "I think it's too early to say anything like that at all."

She added that there are still vacancies available in areas such as retail and agricultural work, but that opportunities will vary around the country.

On Tuesday, the Prince of Wales urged people to help harvest fruits and vegetables as part of the Pick for Britain campaign.

In a video posted on Twitter, he likened the project to the efforts of women who worked in agriculture as part of the Women's Land Army during World War Two.

"In the coming months, many thousands of people will be needed to bring in the crops. It will be hard graft but is hugely important," he said.

The Resolution Foundation, which studies earnings of lower and middle income-workers, surveyed more than 6,000 UK adults at the beginning of May.

The Health Foundation, the charity which funded the research, says it was concerned that the current crisis is magnifying already-precarious employment conditions young people face.

However, the report found the scale of pay reductions during the crisis would have been greater were it not for the government's job retention scheme.

The furlough scheme covers 80% of workers' pay up to £2,500 per month and was recently extended to October.

Latest government figures show eight million jobs have been furloughed so far - at a cost of about £11bn.

However, campaigners said it has made "no difference" to the thousands of people who initially fell through the cracks.

Last week, the chancellor warned it was "very likely" the UK is in a "significant recession", as figures revealed the economy contracting at the fastest pace since the financial crisis.

Countries around the world are struggling with surges in unemployment due to the pandemic.

More than 36 million people are now filing for unemployment benefits in the US, representing almost a quarter of the American workforce.

'The future's unclear'
University of Portsmouth student Emily Isaacs, 20, was working at a kennels near her family home in Ashford, Kent, during the holidays before lockdown began.

But with the business temporarily closed, she says the "future is unclear" and she worries the loss of income could have a knock-on effect on her business studies degree.

"Having the job meant I didn't have to stress about money and I could focus on my studies," she said.

"I don't really want to be worrying in my final year - which is stressful enough with my dissertation coming up.

"I'm still paying for my student accommodation and will have to next year as well, even if they continue with non-contact teaching. The deposit and first month's rent is due next month.

"I've moved back with my parents to try and save and I'm looking for work but a lot of jobs out there aren't the sort I can apply for because some of my family are vulnerable [to Covid-19].

"I'm just hopeful I can find something when I'm back in Portsmouth."