Videos of night burials have been circulating on social media in Tanzania causing some to call into question the government's approach to the coronavirus pandemic.

The footage shows the funerals taking place under tight security with people wearing personal protective equipment and very few mourners in attendance.
Opposition politicians and activists believe it may be part of cover-up by the authorities who have not been releasing regular updates on coronavirus.

Unlike other countries, Tanzania has not opted for strict lockdown measures although mass gatherings at funerals, like weddings, have been banned.

But the secretive nature of the filmed burials is fuelling speculation that the true scale of infections around the country is being hidden.

"I don't want to feel like the government is hiding something. I want it to perform its role. Right now, we are witnessing a lot of mourning, burials and dead bodies everywhere," said opposition leader Zitto Kabwe.

"Without transparency, the citizens will be more scared, which may cause even more deaths."
The Tanzanian health ministry on Sunday said there would be no more night burials and that from now on, family members would be fully involved in funeral preparations to ensure that the dignity of the deceased is preserved.

Prime Minister Kassim Majaliwa has cautioned against spreading fear, saying not all deaths should be attributed to coronavirus.

The East African nation has recorded 480 cases of Covid-19 and 16 deaths.

Doing the 'Wuhan shake'
The government's main priority appears to be keeping the economy going as President John Magufuli refuses to countenance the closure of markets or the lucrative port in the commercial hub of Dar es Salaam.

He was one of the first world leaders to stop shaking hands in early March - being pictured exchanging the "Wuhan shake" foot greeting with an opposition politician.
On the same day UK Prime Minister Boris Johnson, after a visit to a hospital, declared he would continue to shake hands - and later contracted coronavirus.

But some of the Tanzanian leader's attitudes to the dangers of coronavirus have caused controversy - though those familiar with his leadership style may not be surprised - and his nickname, "The Bulldozer", hints at his authoritarian nature.

'Go to church for healing'
Mr Magufuli has insisted that people should still go to places of worship to find "true healing" - despite these being areas where social distancing is difficult to follow.


During the Muslim holy month of Ramadan, mosques are open for prayers though the meal eaten to break the fast can only be offered as a takeaway.

While attending church several weeks ago, the president, a devout Catholic who has a PhD in chemistry, termed coronavirus a "devil".

"It cannot live in the body of Christ. It will burn instantly," he said.
The president has often asked citizens to turn to prayers, with the government even setting aside days to do so.

Are face masks safe?
He has also stopped the disinfection of public places, suggesting that chlorine spraying may be responsible for a rise in Covid-19 cases in Dar es Salaam.


"There is no disinfectant that kills coronavirus. This disinfection that was done in Dar es Salaam is stupidity…. Such an exercise only eliminates mosquitoes, fleas and cockroaches.
"What if [the spray] has coronavirus in it."

There is a debate about the effectiveness of spraying diluted bleach outside, which cities around the world have been doing, as it breaks down under ultraviolet (UV) light - though there is no suggestion that the practice will spread the virus.

The president has also questioned the safety of some equipment: "Even on the testing kits, the face masks that we are importing, we must ask ourselves, are we sure they are safe for our people?"
He would prefer home-grown solutions and has suggested the health ministry consider neem leaves, known as "mwarubaini" - meaning "40 cures" - by boiling them with onions and getting patients to inhale the steam.

On Sunday, he said that Tanzania would import a herbal tonic touted by Madagascar's President Andry Rajoelina as a cure for coronavirus.

The World Health Organization (WHO) says there is no cure for Covid-19 and has advised against self-medication.

Mr Magufuli also cast doubt on the credibility of the national laboratory where samples are tested, saying that he had secretly had some animals and fruits tested and that a papaya (paw-paw), a quail and a goat had all tested positive.

"That means there is possibility for technical errors or these imported reagents have issues," he said, without giving more detail.

The man who 'turned bullets into water'
Mr Magufuli's actions have on some internet forums been likened to Kinjeketile Ngwale, a spirit medium who united Tanzanians in the Maji Maji Rebellion against German colonial occupation at the beginning of the 20th Century.

He may be a nationalist hero but his promise that German bullets would turn into water (or "maji" in Swahili) turned out not to be true and many thousands died in the conflict.
The WHO is happy to see that the East African nation has taken some measures against coronavirus, such as closing schools and colleges.

Though it says the fact that this was only done in mid-March, after the first case was announced, means an opportunity was lost to slow the spread of the virus.

"Certainly in Tanzania we have observed that physical distancing, including the prohibition of mass gatherings, took some time to happen and we believe that these might have been probable factors that led to a rapid increase in cases there," said Matshidiso Moeti, the WHO's regional director for Africa.

And while sporting and social activities are not allowed, for most establishments it is business as usual.

High-end restaurants and hotels may be required to only sell takeaway food, but most other cafes are still operational, with no distancing at all.

Public transport is still running, and keeping one's distance from fellow passengers is near impossible.
'People are scared'
At Dar es Salaam's fish market there are water containers and soap available at the entrance, but again social-distancing requirements are not being followed, and not many people wear face masks.

Fishmonger Juma Issa is happy that the city has not gone into lockdown as he needs to work to support his family, but fears that some customers are staying away of their own accord.

"I know this is a serious pandemic and I work here in a fish market which can be so dangerous with lots of people coming - I believe people are scared to come here," he told the BBC.

He wants the government to make sure hygiene rules are observed so that customers feel safe.

It is a view echoed by Mohammed Khamis in Zanzibar, who says his local mosque is not doing enough to protect people.

"I found a bucket of water with no soap. The mosque is not disinfected before and after the prayers," he told the BBC.

The devout Muslim, who prays five times a day, said he had now stopped going to the mosque because of the lack of hygiene. 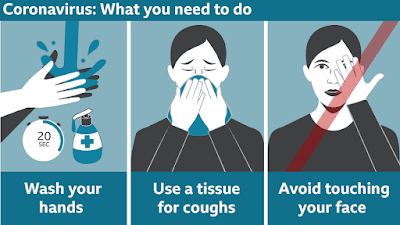 And with the deaths of three MPs in less than two weeks, the main opposition Chadema party, which has been calling for parliamentary sessions to be suspended for some time, has banned its members from parliament and told them to self-isolate for at least two weeks.

There has been no suggestion by the authorities that the deaths are linked to coronavirus, but the move is a reflection of the distrust spreading about the handling of the pandemic.