Coronavirus: Why so many people are dying in Belgium

Belgium is the world's worst affected country when it comes to the coronavirus mortality rate.

That rate, unlike the total number of fatalities, is a measure of the number of deaths in relation to the size of population.

President Donald Trump pointed to a graph recently, displaying Belgium at the top and the US in seventh place, as a result of the number of deaths relative to population size.

But those figures are "faulty comparisons" that have been "abused", argues Prof Steven Van Gucht, a Belgian virologist and government spokesman.

"That's the difference between public health science and political motivation," he explains. "That's purely inspired by showing how good you are doing, and it's wrong. We are actually reporting in a more correct way."

What's different about Belgium?
Belgian officials say they are counting in a way that no other country in the world is currently doing: counting deaths in hospitals and care homes, but including deaths in care homes that are suspected, not confirmed, as Covid-19 cases.
According to Belgium's latest official figures, out of 7,703 deaths, 53% have been in care homes. 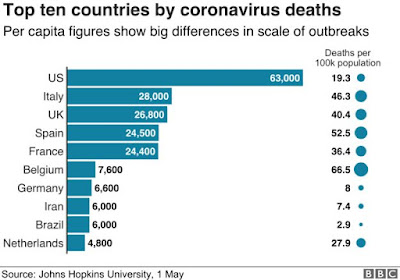 Some 16% of deaths in care homes were tested positive for coronavirus. The rest are suspected.

That means more than 3,500 deaths have been counted as caused by Covid-19, but not confirmed.

How do they work it out?
"It's based on the assessment of the medical doctor, usually taking into account whether the coronavirus is present in the same care home," says Prof Van Gucht.

"For example: if you have one or two confirmed cases, then the week after you have 10 deaths in the same home based on similar symptoms."

However, Prof Van Gucht says the real number of deaths may still be higher than they are reporting, as he believes they may still be missing a few cases.

Is it just down to counting?
Another factor is that many more people here put loved ones in care homes than elsewhere in Europe.

Only the Netherlands and Luxembourg have a higher rate of care home occupancy, relative to their populations.

Now all nursing home staff are issued with masks and protective clothing, and nurses from hospitals and the military have been brought in to help.

Epidemiologists say they've found a "remarkable" observation in care homes, that around 10% of residents have been asymptomatic carriers of the virus and have built up an immunity. A small comfort, but of important scientific value.
How long has Belgium been in lockdown?
Since 18 March all non-essential business has been closed and, apart from emergency workers, people have been asked to stay at home.

Shopping is limited to one person per family. You can leave the house for medical reasons, to walk the dog, or for an hour's exercise with immediate family, or one other person, while maintaining social distancing of at least 1.5m (5ft).

Belgian police have been enforcing the lockdown, using drones in parks and fines for anyone breaking social distancing rules.

Checkpoints have been set up at the borders with Luxembourg, France and the Netherlands, allowing through only cross-border workers, or those with an urgent reason to enter Belgium.

Some cyclists have been fined after taking a ride into the Netherlands, then being stopped by Belgian police on the way back.
Neighbours with different lockdowns
All non-food shops have been closed too, which led to a bizarre incident in the neighbouring towns of Baarle Hertog and Baarle Nassau, where the border line runs through a bargain store called Zeemans.

The Dutch half of the shop is open, but the Belgian half has been taped off, with customers unable to get to the men's clothing section.

Unlike Belgium's policy, the Netherlands has what Prime Minister Mark Rutte described as an "intelligent lockdown", with florists, ironmongers, bakeries, clothes and toy stores remaining open.

I asked the head of Belgium's Covid-19 taskforce, Minister Philippe De Backer, if he thought the Belgian confinement method was more effective than the more relaxed Dutch and Swedish approaches.

He told me Swedes were renowned for following government advice, while it was "a bit more difficult in a country like Belgium". However, he was generally "impressed by how Belgians has dealt with the crisis".
What happens next?
Belgium will lift its lockdown gradually, in four phases. From Monday, fabric stores are being opened so people can buy material to make their own face masks. Masks will be mandatory on public transport.

Sport will be allowed, too, though no more than two people can play together.

All other shops will open from Monday 11 May. Schools will restart on 18 May, with a maximum of 10 students per class.

Cafes, restaurants and some tourist attractions will open after 8 June, if there has been no second spike in cases. Trips abroad may also be allowed in early June.

How is Belgium testing?
Testing for Covid-19 is being done on 10-20,000 people a day, with priority for emergency workers.

The taskforce has also finished screening all 210,000 residents and staff in care homes, discovering that 10% of people are infected. There are more than 500 care homes, and roughly half have had an outbreak.

Antibody tests to detect if people have had the virus will start in mid-May.

Will Belgium use tracking apps ?
Not in the short term. Taskforce head Philippe De Backer tells me it's not "feasible" at the moment, so they will concentrate on the laborious system of tracing manually.

"When people test positive, it activates a call centre, and our staff ask who they've been in contact with, and they will be contacted and may have to self-isolate."

Mr De Backer says use of an app requires at least 60% of the nation to take part voluntarily and he believes that is not realistic at the moment.

As Belgium gradually lifts its restrictions, 2,000 so-called "corona detectives" are being hired, to trace people who have been in contact with confirmed or suspected Covid-19 patients.

What has Belgium learned?
Belgian scientists have started to look at lessons that can be learned, including an analysis of why three cities have had the biggest concentration of cases: Charleroi in the south, and Hasselt and Sint-Truiden in the east.
Early indications suggest that local carnivals with big gatherings of people in March may have contributed, along with areas where second-generation Italian populations are high. In the case of Charleroi, experts are studying whether the spread was linked to issues of poverty and deprivation.

Belgian hospitals have been largely able to cope with the epidemic so far, with a 42% occupancy rate now, but some hospitals in Brussels have been overwhelmed, and have had to move patients elsewhere.

As the confinement here slowly ends, September is a worry for officials, as Prof Van Gucht makes clear.

"When all the schools are open again after the summer, that's when the virus risks spreading quickly again. That's when I'm more afraid, with winter coming too."