None of us are normal

“You are not the first of my patients to mention that,” my omnipotent therapist said when I sat on her couch and voiced some deep-seated feelings about the film adaptation of André Aciman’s Call Me by Your Name. Funny how the best and worst thing your psychologist can say to you is the same. Here was the coach of my tenderest soul saying that I was not unique in the world—how dare she! On the other hand, maybe it would be nice not to be alone.

Reading Normal People by Sally Rooney and then watching the very convincing Hulu adaptation, to be released today, I wondered if that was the spell of this story as well. Rooney addresses the contradiction again and again: the fundamental tension between being independent and needing to be understood, between wanting to be uncategorizable and wanting to belong.

Before I watched the series, with only the novel throwing light motes on my subconscious, I wondered if there were oceans of young reading women who saw themselves in the prickly character of Marianne. Certainly, the book found many fans—enough to push it into seven editions, reach almost 500,000 copies in the UK and 76,000 in Ireland, and sell translation rights into forty-one languages before adaptation. Or if Rooney was a convincing enough author to pull that most astounding trick, of making the lives of any individuals feel relatable on a grand scale. 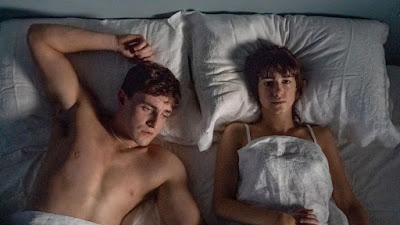 Normal People is a pas de deux: a boy and a girl take turns misunderstanding each other as the novel follows them from their senior year in high school to their senior year of college. Their deep physical compatibility is derailed by a series of small misconceptions. The story is a kind of minimalist millennial antidote to the theatrical impossibility of the epics of my youth: Cider House Rules, Cold Mountain, Snow Falling on Cedars, dining on the idea that a tiny misunderstanding can cause ripples of heartache.

While both characters are almost supernaturally intelligent, Marianne is affluent, lonely, and deemed physically unappealing in high school, while Connell is working class, deeply knit into a friend group, and a golden athlete. They begin a physical relationship that quickly becomes emotional, but Connell, plagued by social anxiety, sees their love as an impossibility. They keep the romance a secret at his request, and it becomes an imbalance they spend years trying to correct—as they both come to see the subterfuge differently.

Connell’s devotion to the “normal” splits them up, but not before Marianne persuades him to pursue a degree in English at Trinity, where they meet again for Act 2. In college, their roles are reversed.

Marianne flourishes— in college she is normal—easily playing the confident intellectual, and Connell is at sea among the entitled students of Trinity, where the social code—once so important—is not clear to him. When they are together they are alone together—a bande à part—but if you are defying all the rules, how do you know which way is up? If you are starting from scratch, how do you say hello? What kept my heart pounding is how a couple so deep in love could fail to find the words for each other or, having them, fail to say them.

Hulu’s series is written in part by Rooney, in part by Succession writer Alice Birch, and in part by Irish playwright Mark O’Rowe. It was codirected by the acclaimed Irish director Lenny Abrahamson, whose films include Frank (2014) and Room (2015), and Hettie MacDonald, whose episode of Doctor Who won a Hugo Award.

Blissfully, the acting on the part of Daisy Edgar-Jones (Marianne) and Paul Mescal (Connell) is transcendently believable. Edgar-Jones said that upon meeting Mescal, she thought, I know everything about you. She had to remind herself he wasn’t actually Connell. (Same, same.) By the series’s end I felt a deep intimacy with this Mescal/Connell centaur, in no small part through having watched him have quite a bit of onscreen (simulated) sex. Sex so compellingly and fairly choreographed that I surfaced, pulse in my ears, only occasionally, to think that this series must have had one of those newfangled intimacy coaches on set (it did).

You see as much of Connell’s naked form as you do of Marianne’s, which is one of many moments when I wondered what the world would look like if Rooney issued edicts beyond fiction. Normal People is Mescal’s television and film debut and, when I was able to remember he was an actor at all, his well of pain made me wish more screen actors spent time on the stage. Edgar-Jones, poor lass, I couldn’t see at all. She was cloaked by my projections.

Rooney famously caught the eye of her agent with an essay titled “Even If You Beat Me.” In it, she writes about the temporary appeal of competitive debate, which at first seemed to break the arbitrary rules of high school: “Popularity was not a mysterious arrangement of personal loyalties within a social code I didn’t understand: it was essentially just the same thing as success. Successful people were popular. You knew whose jokes to laugh at, because they were the people who gave the best speeches and said the cleverest things. I found this transparency encouraging somehow.” But by the time she reached the top, as she did, Rooney saw the shallowness of the sport: “Observe it for long enough and you can see the moving parts. The harder I practiced, the harder it was to recapture that sense of glamour that motivated me in the beginning.”

The clarity of Rooney’s debunking is appealing, but so is its near opposite: an almost naive belief in a meritocracy rewarding language and intelligence. Both of Rooney’s novels have a red-rover element. A bright contrarian hurls herself at convention, and it is hard to say whether you would rather have her win or—having made a good effort—join the chain, clasping hands on either side.

The fantasy of Connell and Marianne’s love isn’t only the fabulous sex—though it is undoubtedly fabulous—it is that they seem to be able to “couple” outside of the apparatus. Marianne explains to Connell her need for sadomasochistic play with a new boyfriend. “Did you want to do that stuff with me?” Connell asks, and Marianne explains no, with him she didn’t need to play. “I actually had those feelings, I would have done anything you wanted me to.” Marianne and Connell don’t need props or precedents, they don’t need labels or words, until, until … he is unable to ask a favor, or she is, and they run to ground just like everyone else. Does it work, in the end? Is their relationship a successful alternative collective or another failed college experiment? The series is more clear than the book on this point, but the fun is forming an opinion of your own and—perhaps—carefully defending it in a well-proctored debate.

I worried that twelve episodes of Normal People would be too many, the pain too protracted, the sex too performed. But the novel is beautifully translated. Watching the show gave me the feeling of having tied a parachute to my book and thrown it into the air. With all that airtime, Normal People wafts gently down to earth and, in having been duplicated, completes itself. The long silences onscreen made the book blossom for me in a way it couldn’t as I raced through it alone. In the book, we have sentences such as, “When he talks to Marianne he has a total sense of privacy between them. He could tell her anything about himself, even weird things, and she would never repeat them. Being alone with her is like opening a door away from normal life and then closing it behind him.”

Close-ups throughout the series, often with an embarrassment of beautiful light, do what Rooney’s close third person does on paper. Often, in Mescal’s case, dialect and accent did things I hadn’t known I needed. Trying to explain why he puts up with all manner of boring immaturity from his friends, Connell delivers the devastating line to friendless Marianne: “They’re my friends at the end of the day, it’s different for you.” “Why is it different?” she asks, her young woman’s voice direct and unmodulated. “Ach,” says Connell. The wordless sound takes on habit and comfort and tradition, a single syllable we don’t have on this side of the Atlantic.  Watching the series, I could admire the economy of the book. Checking scenes in the novel, I could admire the generous humanity and intension of the actors.

Mescal leans toward Edgar-Jones as though his life has led up to this moment. In a tense scene, Mescal catches Edgar-Jones midair as she flies at a boyfriend in rage. The leap, the perfect catch, isn’t in the novel. It is made possible by the bodies of the young actors, who, like their subjects, seem for once not to be acting at all.

When one has read a novel before seeing a film adaptation, the actions become “decisions,” as in, Oh, they decided to leave out the early violence with her brother, or, Oh, they decided to leave race out of that conversation. Some of us will watch Hulu’s Normal People and love it (if I haven’t been clear enough already, the twelve episodes are almost worth watching for the sex scenes alone) but some of us will find faults. A critical distance is what takes us further from the crowd and brings us closer to our idea of ourselves: argumentative Mariannes on couches and under duvets across the world. On one of those couches will be Rooney herself, having created in some way the meritocracy she admired. We’ll have tuned in because we love her stories, and I think many will stay for the beautiful projection of her ideas. There will be a lot of us out there watching—alone together—bande à part.