US President Donald Trump has said he is taking hydroxychloroquine to ward off coronavirus, despite public health officials warning it may be unsafe.

Speaking at the White House, he told reporters he started taking the malaria and lupus medication recently.

There is no evidence hydroxychloroquine can fight coronavirus, and regulators warn the drug may cause heart problems.

What did Trump say?
The 73-year-old president was hosting a meeting devoted to the struggling restaurant industry on Monday, when he caught reporters unawares by revealing he was taking the drug.

Asked what was his evidence of hydroxychloroquine's positive benefits, Mr Trump said: "Here's my evidence: I get a lot of positive calls about it."

He added: "I've heard a lot of good stories [about hydroxychloroquine] and if it's not good, I'll tell you right I'm not going to get hurt by it."

Though some people in the White House have tested positive for coronavirus, the president said again on Monday he had "zero symptoms" and was being tested frequently.

He added that he had been taking a daily zinc supplement and received a single dose of azithromycin, an antibiotic meant to prevent infection.

When asked whether the White House physician had recommended he start taking the disputed remedy, Mr Trump said he himself had requested it.

Dr Sean Conley, physician to the president, said in a statement issued through the White House later on Monday that Mr Trump was in "very good health" and "symptom-free".

The US Navy officer added: "After numerous discussions he and I had regarding the evidence for and against the use of hydroxychloroquine, we concluded the potential benefit from treatment outweighed the relative risks." 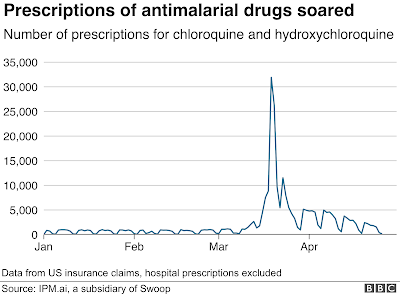 What have US health officials said?
The US Food and Drug Administration (FDA) last month issued an advisory saying that hydroxychloroquine has "not been shown to be safe and effective".

It cited reports that the drug can cause serious heart rhythm problems in Covid-19 patients.

The FDA warned against use of the medication outside hospitals, where the agency has granted temporary authorisation for its use in some cases. Clinical trials of the drug are also under way.

The Centers for Disease Control (CDC) says there are no approved drugs or therapeutics to prevent or treat Covid-19, which is confirmed to have infected more than 1.5 million people in the US, killing more than 90,000 patients.

What else did Trump say?
Dismissing reports of severe side effects from hydroxychloroquine, the president said: "All I can tell you is, so far I seem to be OK."

He said the "only negative" he had heard was from a "very unscientific report" conducted by "people that aren't big Trump fans".

Mr Trump was apparently referring to a preliminary study from April of Covid-19 patients in US government-run hospitals for military veterans that suggested hydroxychloroquine had no benefit and may have even caused a greater rate of deaths.

"I get a lot of tremendously positive news on the hydroxy," the president told reporters, adding: "What do you have to lose?"

According to doctors, the drug has the potential to cause symptoms including heart failure, suicidal thoughts and signs of liver disease.

What's the reaction?
Mr Trump's most powerful elected antagonist, the Democratic Speaker of the US House of Representatives, Nancy Pelosi, could not resist taking a dig at his age and weight when asked on CNN about him taking the malaria medication.

"He's our president and I would rather he not be taking something that has not been approved by the scientists, especially in his age group and in his, shall we say, weight group - morbidly obese, they say," she said.

Last year, the White House physician noted in Mr Trump's annual medical exam that he weighed 243lb (110kg) and was 6ft 3in, which would score his body mass index at a technically obese 30.4.

"He may not have been taking it for all we know. He just likes to make a splash," he told MSNBC.

"Maybe he's really not taking it," he continued, "because the president lies about things characteristically-like."

Is Trump misguided or a trailblazer?
Analysis by Michelle Roberts, Health Editor

I'll have what President Trump's having. No thanks - or rather, not yet.

Currently there is no convincing evidence that hydroxychloroquine helps fight the virus and it can cause unpleasant and harmful side effects in some people.

In theory, repurposing existing drugs to treat coronavirus is a very good and sound idea (unlike Mr Trump's previous ones about injecting disinfectant or hitting the body with "tremendous" UV light). It may be our only hope, at least in the short term, until a vaccine can be found.

The UK government has been stockpiling some medicines that might be useful against coronavirus. That includes 16m hydroxychloroquine tablets. Clinical trials are under way in the UK and the US to assess the drug's worth. The human guinea pigs taking part include frontline healthcare workers at high risk of exposure to the virus, as well as patients.

Experts agree that this work is worth doing, but they are concerned about advocating more general use of these experimental treatments before the proof is in.

Dr Stephen Griffin, associate professor at the School of Medicine at the University of Leeds, told me: "People that follow the president's example might not only endanger themselves but could also deprive patients with chronic autoimmune conditions of their much-needed medication."