The vacuum-sealed hyperloop train system came one step closer to reality last week when a company working on bringing the transit system to life announced the next step in a global competition. Los Angeles-based Hyperloop One has selected 35 teams as finalists in its global challenge, who will now present regional proposals at three different showcases starting next month.

“It’s more than just a train, or a pod in a tube,” Josh Giegel, Hyperloop One’s president of engineering, told Inverse. “We’re taking it to a level of connectivity and really being the high-speed backbone of the future transportation network.”

The current plan is to bring three routes into production over the next five years. Hyperloop One wants to connect cities in individual regions and, eventually, connect those regions to each other to make a giant network. 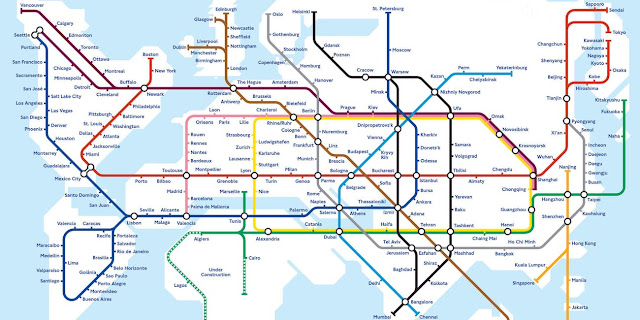 It’s a plan reminiscent of the World Metro Map, designed in 2003 by Mark Ovenden, which imagines what a global underground system could look like. Each city marked on the map either has an operational metro system or planned to open one as of 2008. The data is slightly older at this point, but its reimagining of the globe captured imaginations worldwide.

It seems like a far-fetched idea, but with its ultra high speeds, a global hyperloop network could connect the cities of the world in a similar fashion. Proposed speeds of up to 750 mph would allow a passenger to travel from San Francisco to Los Angeles in around 35 minutes.

It’s the sort of time savings that could reshape the global economy, and with an intercontinental transit network, it could allow for rapid Europe-Asia trips in a matter of hours.

Of course, a potential hyperloop network might not look exactly like the map. Mexico City to Porto, Portugal, illustrated as one stop’s distance on the map, is a 5,000-mile distance spanning the Atlantic. Possibly not the most practical route.