Eight children have been diagnosed with cancer at the same elementary school - prompting parents' fears that a cell phone tower could be to blame.

The affected students at Weston Elementary School in Ripon are all under the age of 10, each with different types of cancer: brain, kidney, liver and lymphoma.

There is scant evidence that cell phone towers pose a real risk to humans, but even skeptics say the number of cases affecting children in such a small city is unusual.

Sprint, which owns the tower, has shut it down despite insisting the radio frequency levels are 100 times below the federal limit.

But the kids' mothers say their own private investigator found much higher levels, though still below the limit.

Monica Ferrulli, who son Mason was diagnosed with brain cancer in 2016, told CBS: 'It is classified as a possible carcinogen.

'That tells us that there is some evidence out there.

'We're not naive to the fact that there could be other components out there - other environmental influences… but the bottom line that we feel in regards to this tower is it doesn't belong there... if there's any indications that its unsafe.'

Ferrulli and Kelly Prime, whose son Kyle was diagnosed with kidney cancer in 2016, have been fighting to take the tower down for two years.

After hiring lawyers earlier this year, they finally got assurance in March that it would be coming down.

Their lawyers at The Cochran Firm argue that contamination is the most likely cause of the unusually high rate of childhood cancer in one small area. 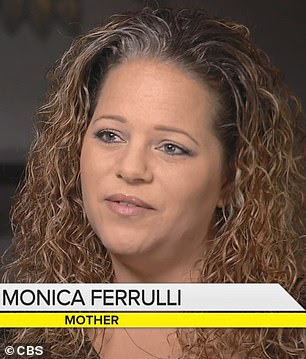 Ripon, east of Sacramento, has a population of around 14,000.

According to the American Cancer Society, about 411 Californians per 100,000 develop cancer every year. That's a rate of 0.0041, and includes adults, who are more likely than children to develop cancer.

Morris says he is not convinced that the tower is harmless.

But he also says other forms of contamination may be compounding factors, implying that a Nestle plant may have leaked toxins into the soil for years.

'After reviewing thousands of pages of documents, I can say there's nothing that has made me less concerned,' attorney Marcelis Morris told Fox 40.

'We need to really dig in and find out what is causing all of this cancer to proliferate in the city of Ripon. We want to save lives. We want to prevent this from happening.'