Scientific phenomena photographs of the year – in pictures

An image of three perpetually bouncing droplets, whose behaviour embodies a key theory in quantum physics, has won first place in the Royal Society Publishing photography competition. The award celebrates science and its beauty as portrayed through photography. 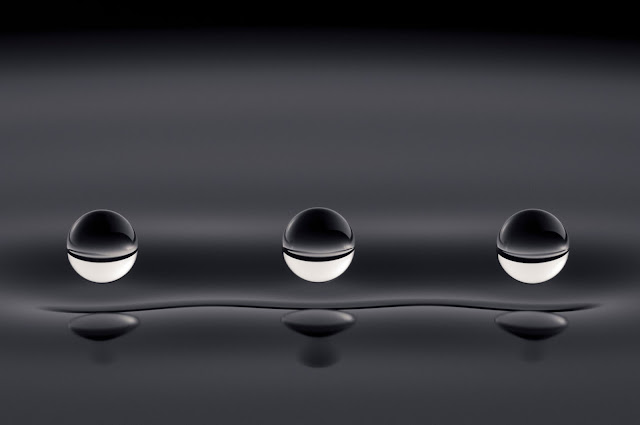 Ecology and Environmental Science winner: Fade to White by Morgan Bennett-Smith
‘A juvenile Red Sea clownfish (Amphiprion bicinctus) looks out from between the clear tentacles of a bleaching sea anemone (Entacmea quadricolor) in Thuwal, Saudi Arabia. While reef-building corals may be the most direct victims of coral reef bleaching events, other species can be similarly affected. Some sea anemones, for example, also expel their colourful symbionts during periods of climactic stress’ 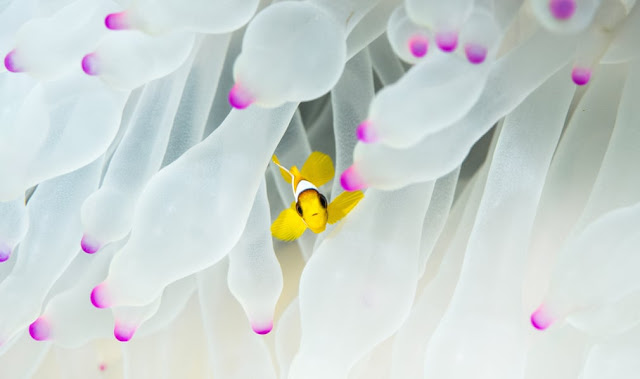 Ecology and Environmental Science runner-up: Vigilant Soldier by Abhijeet Bayani
‘Ropalidia marginata is a primitively eusocial wasp found in southern India. Their nests are built in concealed places as they do not seem to have evolved any active safeguard against their deadliest predator, Vespa tropica. Having vigilant females on their nests can only alarm other nestmates but they do not impede Vespa from foraging on their brood. I found this out when I took this picture inside a tubelight panel and was stung by several vigilant soldiers. No post-processing for image was required’ 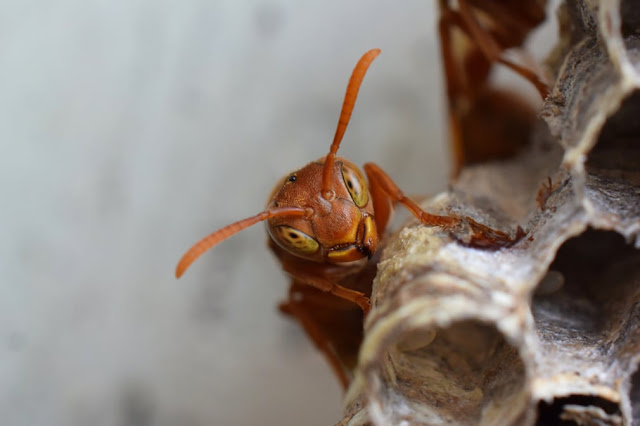 Ecology and Environmental Science honourable mention: Abstract water gallery by Daniela Rapavá
‘In the Ľuboreč water reservoir in Slovakia, I came across blooming water lilies (Nymphoides peltata). Their long stems were rotting, and a white coating formed and spread across the lake. The coating is formed by microscopic algae and cyanobacteria, and contains green, blue and red plant colours. The increased incidence of natural pollution there is related to higher temperatures and low water levels’ 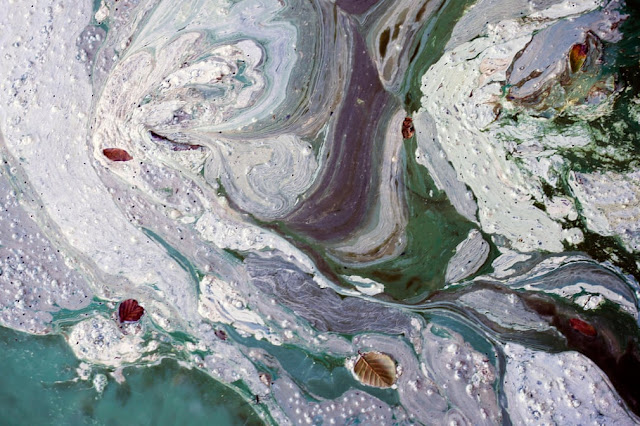 Astronomy winner: Halo by Mikhail Kapychka
‘I suddenly saw an unusual lunar halo in the night sky and hurried outside the city into the forest of Mogilev, Belarus, to take a picture of it. A halo appears in the sky when several factors are combined. Often it is observed in frosty weather in conditions of high humidity. In the air at the same time there is a large number of ice crystals. Passing through them, the lunar or solar light is refracted in a special way, forming an arc around the moon or sun’ 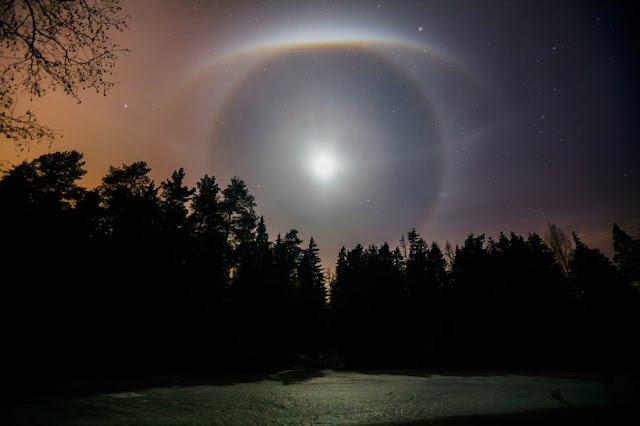 Astronomy runner-up: Taranaki Stars by James Orr
‘This is an image of the Milky Way and the two Magellanic clouds above Mount Taranki, a 2,500m active stratovolcano, on New Zealand’s North Island. The two Magellanic clouds are dwarf galaxies over 150,000 light years away that can only be seen in the southern hemisphere’s night sky. After a tough hike up to this viewpoint, we spent a good eight hours watching the clouds thin, the sun set and the Milky Way appear. By midnight, the sky was full of stars but a sliver of moon was just bright enough to light up the incredible landscape’ 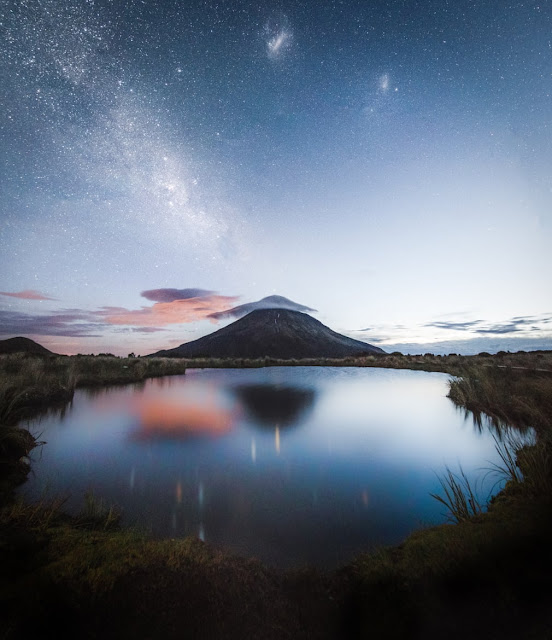 Astronomy honourable mention: Equinox Supermoon Over the Coast Range by Loren Merrill
‘A supermoon rises over the British Columbia Coast range on the spring equinox this year. The last time a supermoon coincided this closely with the spring equinox was 1905, and the next one won’t be until 2144, so this celestial event was a real once-in-a-lifetime moment. I photographed the moonrise from Quadra Island, British Columbia, Canada, looking out across the Georgia Strait’ 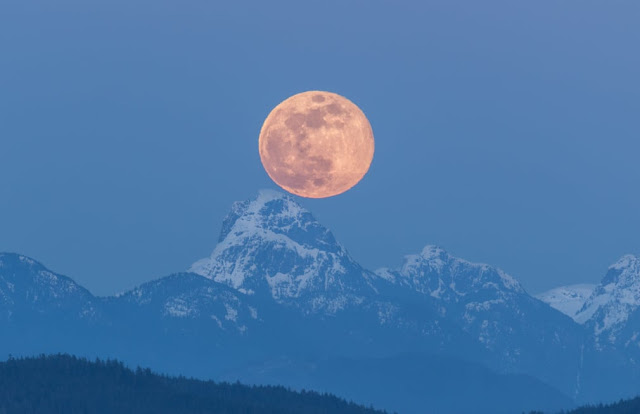 Behaviour winner: Mudskipper Turf War by Daniel Field
‘While photographing wading birds in the famous Mai Po wetlands, Hong Kong, I was distracted by the mesmerising territorial displays of hundreds of blue-spotted mudskippers near the shore. Adjacent individuals would frequently engage in brief skirmishes, allowing me to select the optimal angle for illustrating their aggressive interactions’ 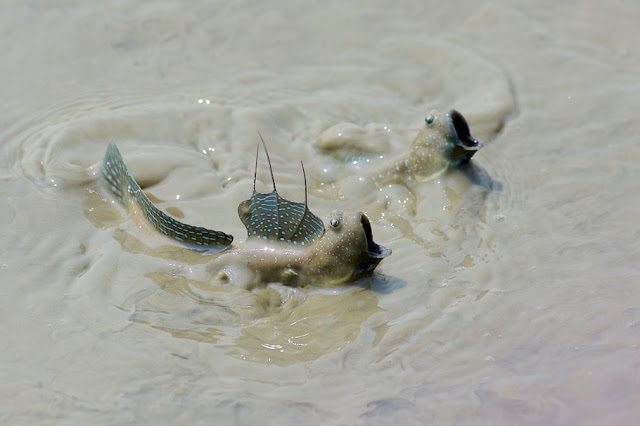 Behaviour runner-up: Jellyfish by Eduardo Sampaio
‘Jellyfish-fish associations happen for a multitude of reasons. However, in this case, it is the simplest one: predation. A young blue trevally (Carangoides ferdau) feeds on the purple jellyfish (Thysanostoma loriferum), and guards it against others that may have the same idea. Given the length and thickness of these tentacles, together with the fact that a jellyfish can regenerate its cells at considerable speed, this interaction can be sustained for several days. When jellyfish are large, they can also be used as shelter by fish’ 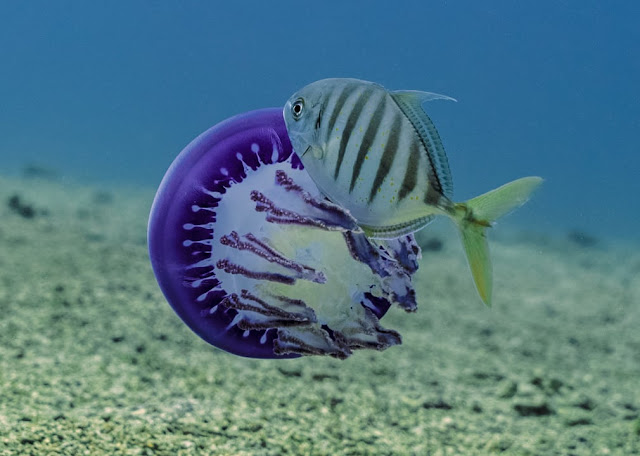 Behaviour honourable mention: Fight Club by Alwin Hardenbol
‘Northern nutcrackers (Nucifraga caryocatactes) often fight over food in the winter, as I saw while on the Vitosha mountain massif, Bulgaria. This could be explained by their typical behaviour of storing food in caches during wintertime. This caching of food is essential to their survival and their breeding strategy, because they usually start the breeding process when there is still snow on the ground. It could, therefore, be worth fighting over the available food to have a better breeding success’ 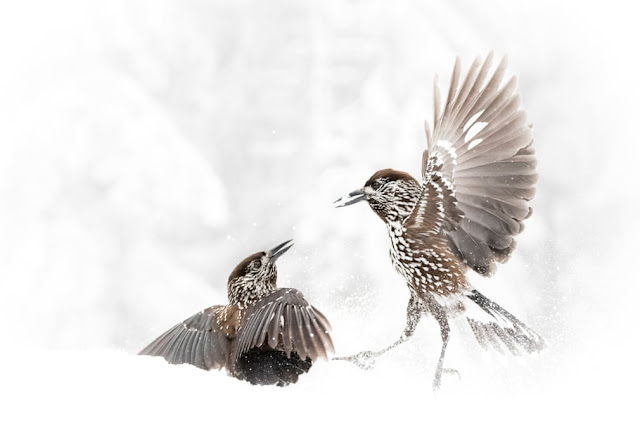 Earth Science and Climatology winner: Twister in the Yukon by Lauren Marchant
‘This photo was taken near to Kluane Lake research station in the Yukon, Canada. It depicts a large, cone-shaped, funnel cloud. A funnel cloud forms when water droplets are drawn in from the surrounding area by a rotating column of wind, making a region of intense low pressure visible to the human eye. Most tornados begin as funnel clouds. However, this funnel cloud never made contact with the ground and therefore could not be classified as a tornado’ 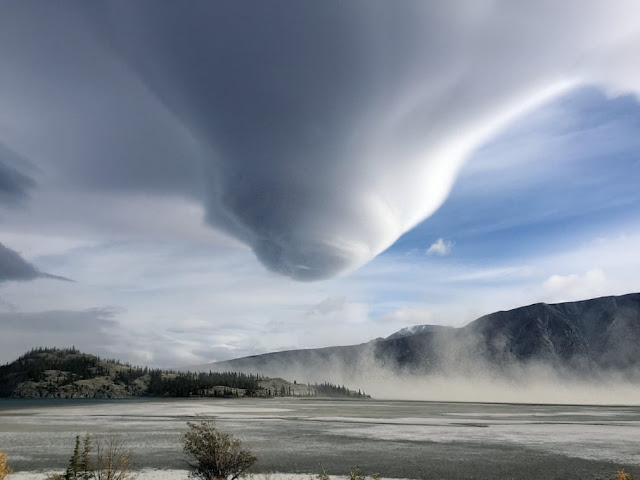 Earth Science and Climatology runner-up: Fizzy Sea by Tom Shlesinger
‘Coral reefs are among the most diverse and productive ecosystems on our planet. However, pollution, over-fishing and the release of gases into the atmosphere are causing acidification and warming of the oceans to levels that corals are no longer able to tolerate. This photo was taken while on a scientific expedition to Ambitle Island, Papua New Guinea, as part of the Coral Reef Acclimatisation to Ocean Acidification (CARIOCA) project. Volcanic carbon dioxide can be seen fizzling from the seafloor alongside diverse and healthy coral reefs’ 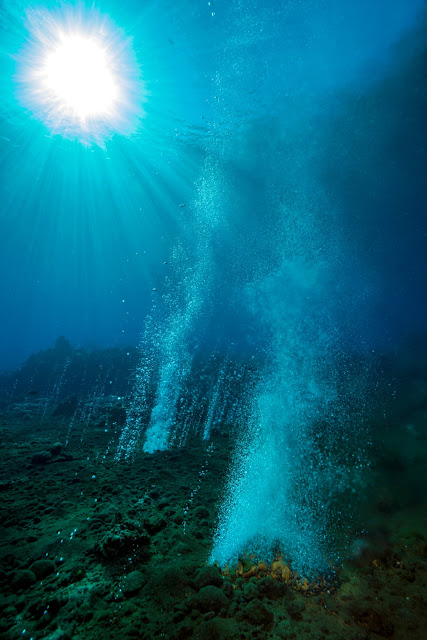 Earth Science and Climatology honourable mention: Mammatus on Fire by R Vicente Calle
This photograph was taken after a summer sunset when these clouds (Cumulonimbus mammatus) quickly formed in Jackson, Wyoming, USA. Mammatus clouds are special structures that are formed by downward vertical currents, which collide with other warm air rising. This collision gives rise to the characteristic bumps at their base as a result, and giving it its name from the Latin word “mamma” 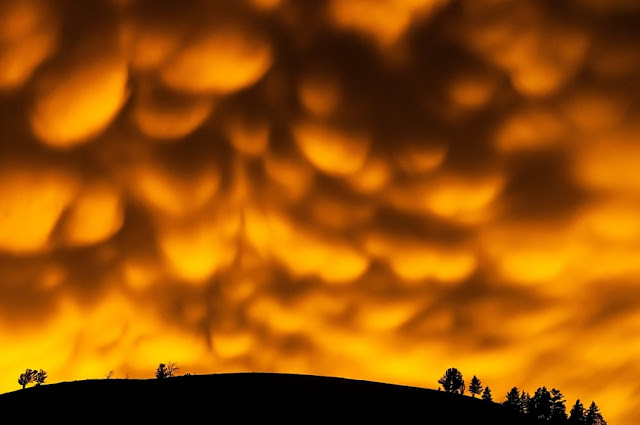 Earth Science and Climatology honourable mention: The Child of Krakatoa Awakes by James DP Moore
‘This photo shows Anak Krakatau at the start of its eruptive phase in August 2018, taken whilst on vacation. This Strombolian eruptive style is building up the flanks of the central cone, out of unconsolidated tephra, with little real strength. Eventually, this constructive phase culminated with the collapse of the southwestern flank (left). The water displaced by this slope’s failure generated a devastating tsunami with no warning, and claimed more than four hundred lives on 22 December 2018’ 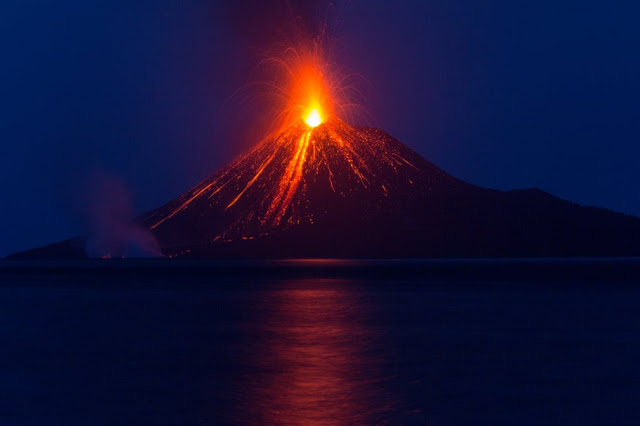 Micro-imaging winner and overall winner: Quantum Droplets by Aleks Labuda
‘These silicone oil droplets are bouncing indefinitely above a vibrating pool of silicone oil at 15 Hz. The surface waves generated by the droplets are analogous to quantum mechanical waves that guide the dynamics of quantum particles. While the droplets move like quantum particles, they behave like quantum waves’ 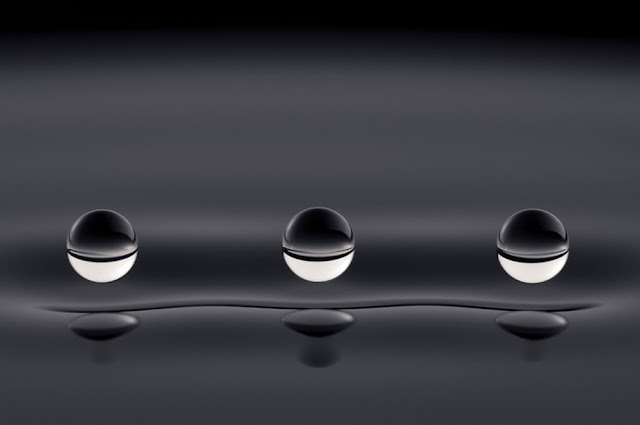 Micro-imaging runner-up, Completely Stitched Up by Anne Weston
‘This is a scanning electron micrograph of surgical thread used to stitch a head wound. The surgical thread was removed from the human patient after seven days, and debris from the skin and the area surrounding the wound can be seen still attached to the thread after removal. What this image shows in great detail is the skill required by healthcare professionals in being able to accurately tie such an intricate knot with a piece of thread less than 0.25mm in diameter, in what is a “routine procedure”’ 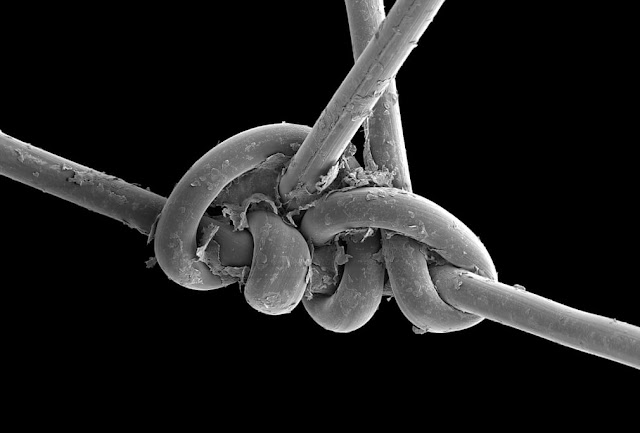 Micro-imaging honourable mention: Magnetostatic Spawn by Aleks Labuda
‘Ferrofluids are colloidal liquids made of nanoscale ferromagnetic particles suspended in a carrier fluid. Surfactants in the fluid prevent the agglomeration of the nanoparticles because their strong van der Waals forces exceed the particles’ weak magnetic attraction. Reducing the size of the magnetite (or hematite) nanoparticles to below 10 nm is key in preventing their precipitation from the carrier fluid’ 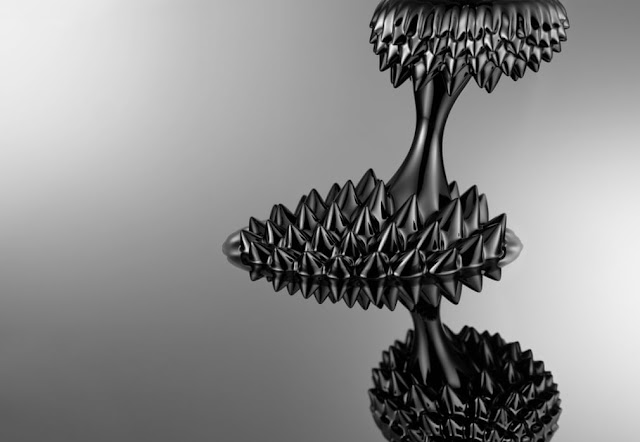 (Source: The Guardian)
Posted by Arjunpuri at 03:30