Picking through a mountain of huge rocks with his tiny bare hands, the exhausted little boy makes a pitiful sight.

His name is Dorsen and he is one of an army of children, some just four years old, working in the vast polluted mines of the Democratic Republic of Congo, where toxic red dust burns their eyes, and they run the risk of skin disease and a deadly lung condition. Here, for a wage of just 8p a day, the children are made to check the rocks for the tell-tale chocolate-brown streaks of cobalt – the prized ingredient essential for the batteries that power electric cars.

And it’s feared that thousands more children could be about to be dragged into this hellish daily existence – after the historic pledge made by Britain to ban the sale of petrol and diesel cars from 2040 and switch to electric vehicles. 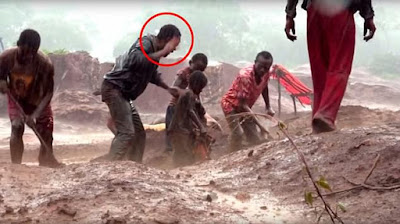 It heralds a future of clean energy, free from pollution but – though there can be no doubting the good intentions behind Environment Secretary Michael Gove’s announcement last month – such ideals mean nothing for the children condemned to a life of hellish misery in the race to achieve his target.

Dorsen, just eight, is one of 40,000 children working daily in the mines of the Democratic Republic of Congo (DRC). The terrible price they will pay for our clean air is ruined health and a likely early death.

Almost every big motor manufacturer striving to produce millions of electric vehicles buys its cobalt from the impoverished central African state. It is the world’s biggest producer, with 60 per cent of the planet’s reserves.

The cobalt is mined by unregulated labour and transported to Asia where battery manufacturers use it to make their products lighter, longer-lasting and rechargeable.

The planned switch to clean energy vehicles has led to an extraordinary surge in demand. While a smartphone battery uses no more than 10 grams of refined cobalt, an electric car needs 15kg (33lb). 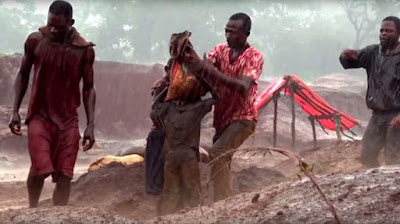 Goldman Sachs, the merchant bank, calls cobalt ‘the new gasoline’ but there are no signs of new wealth in the DRC, where the children haul the rocks brought up from tunnels dug by hand.

Adult miners dig up to 600ft below the surface using basic tools, without protective clothing or modern machinery. Sometimes the children are sent down into the narrow makeshift chambers where there is constant danger of collapse.

Cobalt is such a health hazard that it has a respiratory disease named after it – cobalt lung, a form of pneumonia which causes coughing and leads to permanent incapacity and even death.

Even simply eating vegetables grown in local soil can cause vomiting and diarrhoea, thyroid damage and fatal lung diseases, while birds and fish cannot survive in the area.

No one knows quite how many children have died mining cobalt in the Katanga region in the south-east of the country. The UN estimates 80 a year, but many more deaths go unregistered, with the bodies buried in the rubble of collapsed tunnels. Others survive but with chronic diseases which destroy their young lives. Girls as young as ten in the mines are subjected to sexual attacks and many become pregnant.

When Sky News investigated the Katanga mines it found Dorsen, working near a little girl called Monica, who was four, on a day of relentless rainfall.

Dorsen was hauling heavy sacks of rocks from the mine surface to a growing stack 60ft away. A full sack was lifted on to Dorsen’s head and he staggered across to the stack. A brutish overseer stood over him, shouting and raising his hand to threaten a beating if he spilt any.

With his mother dead, Dorsen lives with his father in the bush and the two have to work daily in the cobalt mine to earn money for food.

Dorsen’s friend Richard, 11, said that at the end of a working day ‘everything hurts’.

In a country devastated by civil wars in which millions have died, there is no other way for families to survive. Britain’s Department for International Development (DFID) is donating £10.5million between June 2007 and June 2018 towards strengthening revenue transparency and encouraging responsible activity in large and small scale artisanal mining, ‘to benefit the poor of DRC’.

There is little to show for these efforts so far. There is a DRC law forbidding the enslavement of under-age children, but nobody enforces it.

The UN’s International Labour Organisation has described cobalt mining in DRC as ‘one of the worst forms of child labour’ due to the health risks.

Soil samples taken from the mining area by doctors at the University of Lubumbashi, the nearest city, show the region to be among the ten most polluted in the world. Residents near mines in southern DRC had urinary concentrates of cobalt 43 higher than normal. Lead levels were five times higher, cadmium and uranium four times higher.

The worldwide rush to bring millions of electric vehicles on to our roads has handed a big advantage to those giant car-makers which saw this bonanza coming and invested in developing battery-powered vehicles, among them General Motors, Renault-Nissan, Tesla, BMW and Fiat-Chrysler.

Chinese middle-men working for the Congo Dongfang Mining Company have the stranglehold in DRC, buying the raw cobalt brought to them in sacks carried on bicycles and dilapidated old cars daily from the Katanga mines. They sit in shacks on a dusty road near the Zambian border, offering measly sums scrawled on blackboards outside – £40 for a ton of cobalt-rich rocks – that will be sent by cargo ship to minerals giant Zhejiang Huayou Cobalt in China and sold on to a complex supply chain feeding giant multinationals.

Challenged by the Washington Post about the appalling conditions in the mines, Huayou Cobalt said ‘it would be irresponsible’ to stop using child labour, claiming: ‘It could aggravate poverty in the cobalt mining regions and worsen the livelihood of local miners.’

Human rights charity Amnesty International also investigated cobalt mining in the DRC and says that none of the 16 electric vehicle manufacturers they identified have conducted due diligence to the standard defined by the Responsible Cobalt Initiative.


Encouragingly, Apple, which uses the mineral in its devices, has committed itself to treat cobalt like conflict minerals – those which have in the past funded child soldiers in the country’s civil war – and the company claims it is going to require all refiners to have supply chain audits and risk assessments. But Amnesty International is not satisfied. ‘This promise is not worth the paper it is written on when the companies are not investigating their suppliers,’ said Amnesty’s Mark Dummett. ‘Big brands have the power to change this.’

After DRC, Australia is the next biggest source of cobalt, with reserves of 1million tons, followed by Cuba, China, Russia, Zambia and Zimbabwe.

Car maker Tesla – the market leader in electric vehicles – plans to produce 500,000 cars per year starting in 2018, and will need 7,800 tons of cobalt to achieve this. Sales are expected to hit 4.4 million by 2021. It means the price of cobalt will soar as the world gears itself up for the electric car revolution, and there is evidence some corporations are cancelling their contracts with regulated mines using industrial technology, and turning increasingly to the cheaper mines using human labour.

After the terrible plight of Dorsen and Richard was broadcast in a report on Sky News, an emotive response from viewers funded a rescue by children’s charity Kimbilio. They are now living in a church-supported children’s home, sleeping on mattresses for the first time in their lives and going to school.

But there is no such happy ending for the tens of thousands of children left in the hell on earth that is the cobalt mines of the Congo.