Children in Delhi smoke 10 cigarettes a day just by breathing

The DIU analysed the pollution statistics of the national capital from 20 October to 21 November and found out that the city's air was so toxic that on average each resident inhaled smoke equivalent to puffing about 340 cigarettes.

Smoking is injurious to health'. We see this slogan pasted everywhere, from movie scenes to massive roadside banners. Smoking is also prohibited to minors. Yet, children in Delhi are smoking 10 cigarettes every day, just by breathing the city's toxic air. The India Today Data Intelligence Unit (DIU) found that, on an average, every Delhi resident smoked about 340 cigarettes between 20 October to 21 November because of the high pollution in the city's air.

The DIU analysed the pollution statistics of the national capital for 33 days, from 20 October to 21 November (till 5 pm) and found out that the city's air was so toxic that, on average, each resident inhaled smoke equivalent to puffing about 340 cigarettes.

This is calculated on the basis of the high level of Particulate Matter 2.5 (PM 2.5) which is harming the lungs of every person in the city.

According to an analysis by Richard Muller and Elizabeth Muller of Berkley Earth, exposure to 22 micrograms per cubic metres of PM 2.5 is equivalent to smoking one cigarette a day. This means that if the PM 2.5 level in the air is 300, it will be equal to inhaling smoke of 14 cigarettes.

Using air pollution data provided by the Central Pollution Control Board, the DIU found that between 20 October to 21 November (5 pm), the average level of PM 2.5 for all the monitoring stations in Delhi was 227, which translates to 10 cigarettes per day. 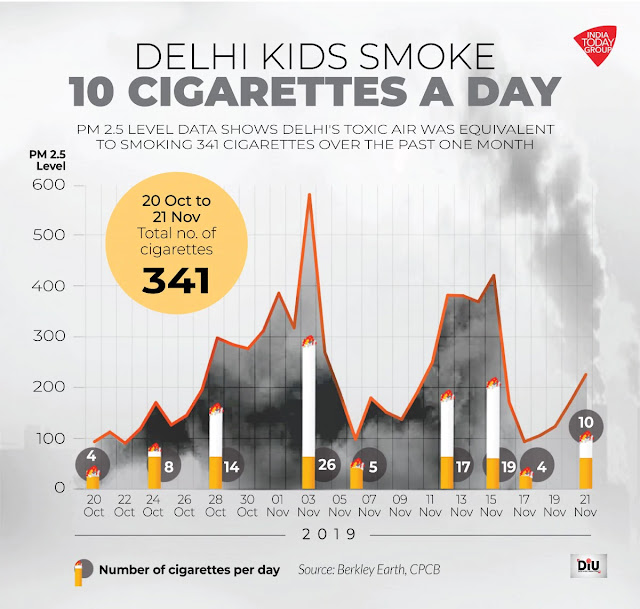 Which day did you smoke the most?
The daily average of PM 2.5 for Delhi reveals that the maximum harm was done around Diwali.

The festival was celebrated on 27 October and this is when you can see that the levels of PM 2.5 started rising significantly. While on Diwali, polluted air was equivalent to smoking nine cigarettes, it spiked the next day to 14 cigarettes because of higher concentration of PM 2.5.

The toxicity in the air remained extremely high for seven consecutive days after Diwali. The situation was worst on November 3 when the average PM 2.5 level was 582, which is 23 times higher than the World Health Organisation's prescribed limit of 25 micrograms per cubic meters (24 hours mean). That was like smoking 26 cigarettes in just one day.

Toxic air is reducing your life
In a previousarticle published by the DIU, we had mentioned that Delhi's air is so toxic that it has cut down the average life expectancy of residents by almost 17 years.

Another terrifying fact is the number of deaths due to air pollution in the country. The DIU had analysed that the mortality rate because of toxic air is 134 per 1,00,000 people, which is almost double the global average of 64.

Dirty air spreads to Rajya Sabha
Last week, a high-level meeting was called by the Parliament's Standing Committee on Urban Development to discuss air pollution in Delhi. However, several politicians and government officials gave it a miss, including Delhi MP Gautam Gambhir, who were then trolled vehemently on social media.

But, politicians seem more serious about the matter now, with Environment Minister Prakash Javadekar listing several steps to combat Delhi's pollution. One of them is the urgent need to create urban forests.