It’s telling that the two words being attached to Sunday’s Super Bowl LIV halftime show are “disgusting” and “empowering.”

For 15 electric minutes, Jennifer Lopez and Shakira performed a nonstop celebration of life and lust and Latin pop and Puerto Rican/Colombian/Lebanese culture and identity and costumes and dancing and footwork. It was muscular and sexy. It was unapologetic.

By Monday, in the harsh light of day, viewers and cultural observers and pundits had fallen into two distinct camps: The show was a triumph; the show was a travesty. Who run the world? (Girls); there was a stripper pole onstage.

As one reader wrote to me Monday morning, “In a time that you and I and so many others advocate for not seeing women as sex objects ... WHAT HAPPENED?” 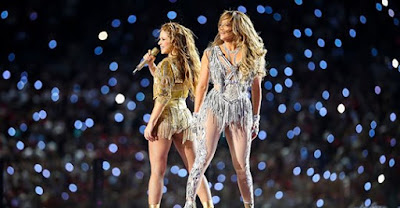 As a commenter wrote on a friend’s Facebook page: “Women will never be taken seriously if they keep turning themselves into sex objects.”

Let’s talk about that for a moment.

First, I think it’s worth pondering why a 15-minute halftime show should guide how we view women, as though we share one collective brain or soul or goal in life. Those two particular women wanted to entertain 100 million or so people on Super Bowl Sunday, and they did so with fierce, fearless, sexy aplomb.

Another woman, San Francisco 49ers offensive assistant Katie Sowers, wanted to serve as the first female coach in Super Bowl history. And she did.

Is it harder for us to take them seriously as leaders, scientists, teachers, authors, as full humans, as women because of a sexy halftime show?
I hope the answer is no. I hope we’re able to see two women headline a performance, even a performance that involves a stripper pole, and still take women, as a gender, seriously.

Did Adam Levine performing shirtless at last year’s halftime show make it harder to take men seriously? Was his tattooed chest a blow to men’s rights? Did you eye your male colleagues, male mentors, male elected officials, male doctors, male authors, male thought leaders with a little more skepticism, a little less authority the next day? Did you see them as walking contradictions — acting all sexy on the one hand and then wanting to be taken all seriously on the other?

I hope that answer is also no.

I hope we can also acknowledge that the #MeToo movement doesn’t need to muscle out a performance like J.Lo and Shakira’s.

The #MeToo movement, as I see it, is not meant to strip sex or pleasure from the female experience. It is not meant to police women’s sexuality and send up a flare when a woman falls from her purity pedestal. It is not a wobbly construct that relies on women shunning sex and sexuality, lest the whole movement fall like a house of cards.

The #MeToo movement is, at least in part, a reclaiming and reframing of female sexuality. It is an ongoing discussion that asks us to acknowledge some hard truths: For far too long, women have been treated as conquests.

Bodies to lay claim to and wield power over and use for pleasure, whether the women who inhabit those bodies liked it or not. That sort of separating of the woman from her body leads to sexual harassment and sexual assault — in the workplace, in schools, on the street, in families, in intimate relationships.
The #MeToo movement is a rejoining. Woman to her body. Woman to her agency. Human to her humanity.

That’s not a contradiction. It’s an awakening. And we’re just now beginning to grapple with what it means. I’m glad we’re having the discussion. It’s not simple, and it won’t be linear, but it’s important. And it’s time.