Severe gales and heavy rain are sweeping across the UK as travellers face disruption from Storm Ciara.

Airlines have cancelled dozens of domestic and international flights, while several rail firms have urged passengers not to travel.
Ferry passengers also face delays and cancellations, while drivers have been warned to take extra care.

Amber weather warnings for wind and heavy rain are in place for most of the UK, with gusts of up to 90mph expected.

More than 150 flood warnings have been issued around the UK.

Heathrow Airport said it had taken the joint decision with its airline partners to operate a reduced timetable to minimise the number of flights cancelled at short notice.

British Airways has cancelled some flights from Heathrow, Gatwick and London City, while Virgin Atlantic has posted a number of cancelled flights on its website.

Network Rail has imposed a blanket speed restriction of 50mph across the network on Sunday, warning passengers to only travel by train that day "if absolutely necessary".
The rail firms which issued "do not travel" warnings for Sunday were Gatwick Express, Grand Central, Great Northern, Hull Trains, LNER, Northern, Southeastern, Southern, Thameslink and TransPennine Express.

Flooding and debris on the tracks have caused delays and cancellations to many services.

Some of the train companies affected by the weather include:

Ferry services have also been affected, with all services suspended at the Port of Dover because of strong winds.

DFDS has also cancelled all its ferries between Newhaven and Dieppe. 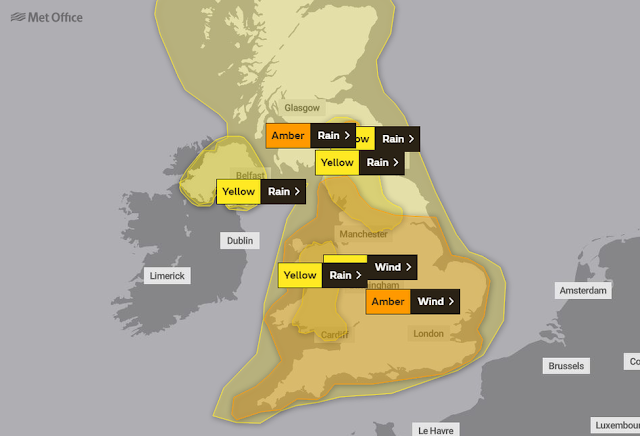 Forecasters have predicted gusts of up to 90mph, and a 86mph gust was recorded in Capel Curig in Snowdonia, overnight.

An amber warning for wind is in place across much of England and Wales until 21:00 GMT on Sunday. The Met Office advises wind-blown debris and large waves could pose a danger to life.

Yellow weather warnings now cover the whole of the UK until midnight on Sunday.

An amber warning for rain is in place in parts of Scotland, meaning homes and businesses are likely to be flooded and some communities could be cut off by impassable roads.

The heaviest rain is expected over high ground where 50-70mm is expected, with as much as 100mm in a few locations.

The Environment Agency has issued more than 100 flood warnings - meaning flooding is expected - in England, while there are almost 60 in Scotland, and 10 in Wales.

Gusts of 50-60mph are expected quite widely across inland areas as the storm passes over the country, reaching 80mph in coastal areas - particularly in south-east England and northern Scotland.

Other effects of the storm include:
In January, Storm Brendan swept into the UK, leading to power cuts and travel disruption.
This year's storm names have already been chosen, with Dennis due to be the name for the next storm.