Coronavirus panic is worse than the beast itself. We all need to calm down, this isn’t Contagion

Pathogens in movies do not work the way they do in the real world. As a professor told me this weekend, there’s never been a virus quite like Hollywood

The World Health Organisation has declared a public health emergency of international concern. The UK has had its first confirmed cases and Israel is quarantining all airline passengers from China at home.

Yes, it’s getting scary. But no, it’s not because of the coronavirus that’s at the centre of these developments. It’s people, and their reactions to it, that inspire fear in me.

It’s the people talking about avoiding Chinese takeaways. The bullies who targeted a Japanese British boy at a school local to me. The travellers who’ve been getting up and moving when British Chinese citizens sit near them on public transport. The steaming piles of alarmist crap on social media. Seven shades of wrong in every case.

“Going viral is a social media phenomenon and this virus has gone viral,” was how one Cambridge University academic described it to professor Jonathan Luke Heeney, the head of the Laboratory of Viral Zoonotics at that august institution. 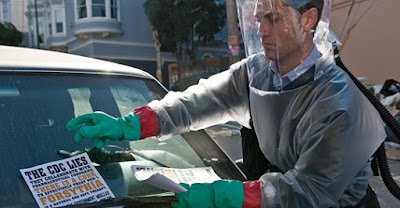 I talked to him before writing this because it had been a long time since I did a virology course as part of my university degree, and I wanted to establish some facts before I advanced the idea that panic is every bit as nasty as the virus, and maybe as dangerous.

So here they are.

When it comes to infectiousness Sars, which caused a panic of its own when it emerged some years ago, had what’s known as an R-Zero number of about 3.

Common or garden ’flu ranges from 2-5. Measles (and if you’re a parent, for goodness sake get your child vaccinated), is the king here at 12-18. The number for the coronavirus sparking all the fuss is currently at 2.3, although that will inevitably change as more data comes in.

How about mortality? As with Sars, the elderly and those with compromised immune systems or other conditions are most at risk. Sars killed 9-16 per cent of those infected. Mers (Middle East respiratory syndrome), another coronavirus of recent vintage, was more frightening. Its number was 30-40 per cent.

The new one is currently hovering at around 4 per cent of those infected.

The nasty thing is that it can be spread when people are asymptomatic (by contrast to Sars). Heeney worries about it getting into populations where public health systems are weak, and other infections are prevalent, and with good reason.

But this is a long way from the Chinese virus depicted in Stephen Soderberg’s Contagion, or one of Hollywood’s other dystopian pandemic dramas.

Soderbergh’s pathogen appeared to be lethal to everyone who came into contact with it with the exception of Matt Damon. Nasty as it is, the coronavirus is a long way from that.

Much as I love movies, I can understand why Heeney opined that “there’s never been a pathogen quite like Hollywood”.

So listen to the advice, wash your hands, try not to touch your face, and so on. But there is no earthly reason not to order a chicken chow mein this weekend, or to act like an idiot if someone of Chinese ethnicity sits next to you on the Tube.

Sure, I get it. There’s something primeval about the fear of infection.

Something about the idea of an invisible killer in the air that is uniquely chilling. In some ways, the feelings it induces are similar to those spread by terror attacks, which are similarly, and frighteningly, random and strike from out of the blue.

But we need to get a sense of perspective.

One thing that this really ought to do is serve as a reminder that we need to stop screwing with the environment. We don’t yet know the source of this virus, but suspicion has fallen on bats. If you disturb their habitats, or those of other creatures, well, do I need to spell it out? You reap what you sow and all that.

In the meantime, the US State Department has urged its citizens to depart China and perhaps return home to a country in which 30,000 people die every year from gun-related violence.

In the UK, with its NHS and its public health infrastructure, you’re probably more at risk from heading out on to the congested roads than you are from this virus, especially if you do so on two wheels. I can testify to that having come agonisingly close to shuffling off this mortal coil that way myself.

It really is time to pick up a copy of The Hitchhiker’s Guide to the Galaxy and take heed of the message on the front cover: “Don’t Panic”, because panic is highly infectious and extremely unpleasant. It’s a disease that there’s no reason to succumb to.