For British travellers, much is uncertain about how life will be from 2021 onwards.

But UK visitors to the EU will need to get used to more red tape when an online system is introduced, probably in 2022.

These are the key questions and answers.

Will I need a visa to visit the European Union?
Not immediately. Until the end of 2020, everyone is pretending that the UK is still a member of the EU. British passport holders are entitled to travel anywhere in the 27 remaining member states for as long as they like.

UK travel documents will be regarded as full EU passports up to and including the date of expiry or 1 January 2021, whichever comes first. (This applies even if the passport was issued after Britain leaves.) 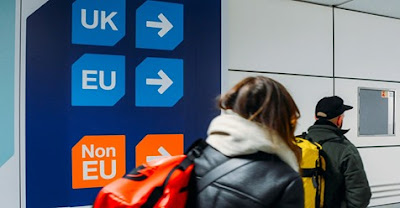 After Brexit a UK passport will continue to be valid as a British travel document – there is no need to renew.

But at the end of the transition British passports will lose much of their power and become subject to additional constraints – including, in time, the European Travel Information and Authorisation System (Etias). This will require prospective UK visitors to the Schengen area to apply online for permission to enter.

The Schengen area comprises most of the 27 remaining members of the European Union (but not Bulgaria, Croatia, Cyprus, Ireland and Romania) plus Iceland, Norway, Switzerland and plucky Liechtenstein.

Is Etias a visa?
Officially, no. Europe says that Etias is “a pre-travel authorisation system for visa-exempt travellers”. It is a similar concept to the US Esta and Canadian eTA, which are not technically visas.

“Its key function is to verify if a third country national meets entry requirements before travelling to the Schengen area.” says the EU.

But as Etias requires visitors to apply in advance, provide lots of personal information, pay money (€7/£6), and be issued with a permit to cross a border, I contend it amounts to a normal person’s understanding of a visa.

When and where must I apply?
There is no need to worry about this aspect of Brexit until 2022. The European Union originally hoped it would be ready by 2021, but that date has slipped.

At the heart of the system will be an Etias app and website – presumably etias.eu, though this URL does not yet route anywhere.

What details will be required?
Personal information including name, address, contact details, passport details and occupation (with your job title and employer, or for students, the name of educational establishment).

There will also be questions about your state of health, particularly any infectious diseases.

You must give details of any serious convictions in the past 20 years.
Next, you must say why you are travelling (holiday, business, visiting family, etc), specify the country you will first arrive in and provide the address of your first night’s stay — which will pose a problem for travellers who like to make plans as they go along.

What happens to the information?
Every application will be checked against EU and relevant Interpol databases, and “a dedicated Etias watch-list”. The system is tuned to pick out individuals suspected of being involved in terrorism, armed robbery, child pornography, fraud, money laundering, cybercrime, people-smuggling, trafficking in endangered animal species, counterfeiting and industrial espionage.

How long will it take for a decision to be made?
The intention is that the vast majority of applications will be approved within a few minutes. But if an application is flagged – ie there is a “hit” with one of the databases – then a decision could take as long as four days.

It may result in a straight rejection of permission, or require the applicant to attend an interview at a consulate of the first country they intend to visit.

In a case of mistaken identity, will I be able to appeal?
Yes. Details of how to appeal will be included with the notice of rejection.

Once I have an Etias, am I guaranteed admission to the Schengen Area?
No. “Mere possession of a travel authorisation does not confer an automatic right of entry”, says the EU. As with the US, travellers can be turned away for any reason.

Does everyone have to pay?
No, those under 18 or over 70 are exempt.

If I am granted entry to the European Union with an Etias, how long can I stay?
The present right of free movement will be surrendered when the Brexit transition period ends.

This will apply in any event from the start of 2021 – it is independent of Etias.
For an example of what it means: if you were to spend the first 90 days of 2021 (January, February and almost all of March) in the Schengen area, you would not be able to return until the very end of June.

Do I need to apply for an Etias every time I travel to Europe?
No. The permit will be valid for three years, or until the passport runs out. It is not yet clear whether you will need to go online and announce your travel plans before each visit to the European Union.

Will I need an Etias to travel to Ireland?
No. The Common Travel Area involving the UK, Ireland, the Isle of Man and the Channel Islands transcends European Union rules, and in any event Ireland is not in the Schengen Area.

What about people without internet access?
They will be expected to get a friend or family member to make the application for them, in the same way as the US Esta and similar schemes.

Is this all because of Brexit?
No. Work on strengthening the European Union’s external border was already under way before the UK referendum on membership in June 2016. Etias would not be relevant if the UK was still in the EU. But the decision to leave means that British travellers will be classified as “third country” citizens, which triggers extra red tape.