At least 10 people on board a cruise ship docked in the Japanese port of Yokohama have tested positive for coronavirus, health authorities say.

Almost 300 of the 3,700 people on the Diamond Princess have been tested so far. The number of infected could rise.

The checks began after an 80-year-old Hong Kong man who had been on the ship last month fell ill with the virus.

Some 3,600 people on a second cruise ship docked in Hong Kong are also being tested.

Chinese health authorities are stepping up efforts to control the spread of the virus, with approximately 18 million people in the east of the country now required to stay at home.

In Wuhan, the epicentre of the virus, 11 large public venues including sports arenas are being turned into makeshift hospitals to provide an additional 10,000 beds for the sick. Two new hospitals have already been built there since the outbreak started.

President Xi Jinping said China's preventive measures were "achieving a positive effect", state media reported. He said China was confident and capable of winning the war against the virus, after authorities were criticised for their initial handling of the outbreak.

The WHO has declared a global health emergency over the outbreak but said it did not yet constitute a "pandemic", or the worldwide spread of a new disease. 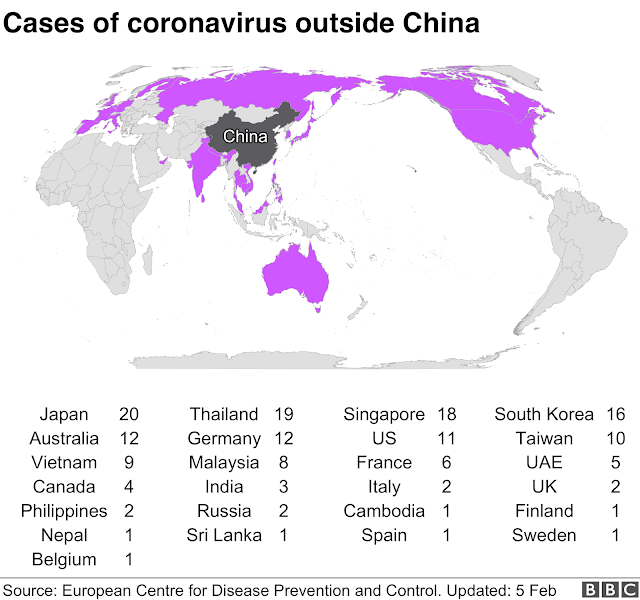 The new coronavirus causes severe acute respiratory infection and symptoms usually start with a fever, followed by a dry cough. Most people infected are likely to fully recover - just as they would from a flu.
In other developments:
How did the virus get on board the ship?
There is a much smaller number of cases in countries around the globe other than China - two people outside of mainland China have died of the disease.

The Hong Kong man believed to be the source boarded the cruise ship in Yokohama, Japan, on 20 January, and disembarked in Hong Kong on 25 January. He was only later found to have tested positive for the virus.

Officials on the cruise ship began screening guests on Monday evening, and the vessel was placed under quarantine on Tuesday.

What happens to the passengers now?
Passengers and crew on the ship will now be under quarantine for 14 days. The incubation period of the virus is believed to be around two weeks.

All 10 cases are in those over the age of 50 and one is in their 80s, Japanese broadcaster NHK said.

Two of them are said to be Japanese, and none are in "serious condition", it added.

"We had them [the ones who tested positive] get off the vessel and... we are sending them to medical organisations," Japanese Health Minister Katsunobu Kato said at a news conference on Wednesday. 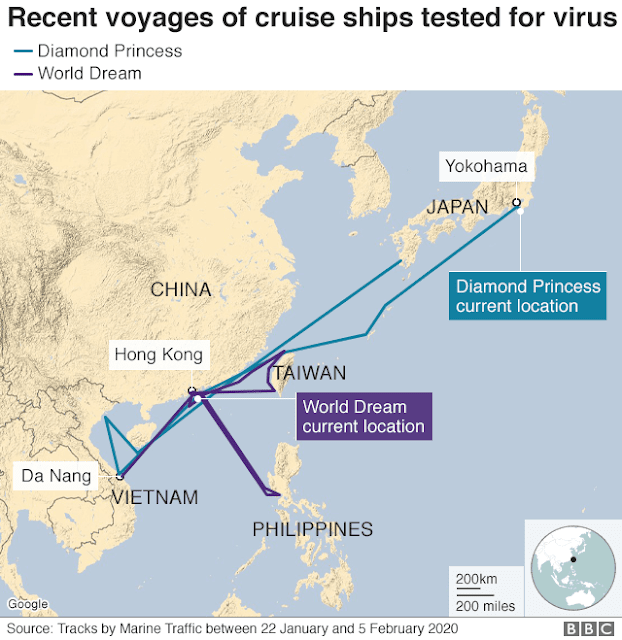 British tourist David Abel, who is on board, told the BBC he was supposed to return to the UK on Tuesday.

"We had a flight booked with BA on Tuesday morning and that has had to be cancelled. We've got no idea when we are going to be allowed off the ship," he said.

"All we have been informed [sic] is 14 days quarantine on the ship. That means we've got no interaction with other passengers, food is brought to the room. It's really basic food, nothing like we've enjoyed on the cruise at all."

Another passenger said her mother, who is in her 80s, was running out of medicine.

"We are in trouble because [her] medicine is running out. Many of the passengers are old and some are as troubled as we are," she told NHK.

There are now 20 confirmed coronavirus cases in Japan, excluding the cruise ship infections.

What about the Hong Kong ship?
Separately on Wednesday, 1,800 passengers and a similar number of crew onboard the World Dream, a cruise ship docked in Hong Kong, are also being tested for the virus.

Local media reports say that three Chinese passengers who had spent time on the ship tested positive for the virus after disembarking.

The infected passengers were on the ship between 19 to 24 January. Hong Kong health officials say none of those on board had contact with the three passengers.
Some 30 crew members of the cruise ship say they are suffering symptoms of the virus and are also being tested.