Coronavirus: China accuses US of causing panic and 'spreading fear'

The Chinese government has accused the US of causing "panic" in its response to the deadly coronavirus outbreak.

It follows the US decision to declare a public health emergency and deny entry to foreign nationals who had visited China in the past two weeks.

There are more than 17,000 confirmed cases of the virus in China. Some 361 people have died there.

Outside China, there are more than 150 confirmed cases of the virus - and one death, in the Philippines.

The virus causes severe acute respiratory infection and symptoms seem to start with a fever, followed by a dry cough.

On Monday, a study by a Chinese virologist said a pneumonia outbreak associated with the coronavirus had likely started in bats.

The outbreak took its toll on Chinese shares when markets reopened on Monday following the Lunar New Year holiday.

What measures has the US taken?
On 23 January, the US ordered the departure of all non-emergency US personnel and their family members from the city of Wuhan in Hubei province, where the virus originated.

Less than a week later, the US allowed for the voluntary departure of non-emergency personnel and relatives of US government employees from China.

On 30 January, the World Health Organization (WHO) declared a global health emergency over the new virus.

Following this, the US ordered the departure of all US personnel family members under the age of 21 in China.

Any US citizen who has been in Hubei province will be subject to 14 days' quarantine upon returning to the US.

What are other countries doing to stem the outbreak?
On Monday, Hong Kong said it was suspending from midnight local time (16:00 GMT) 10 out of 13 border crossings with mainland China.

Various countries have imposed varying travel restrictions and other preventative measures, including: 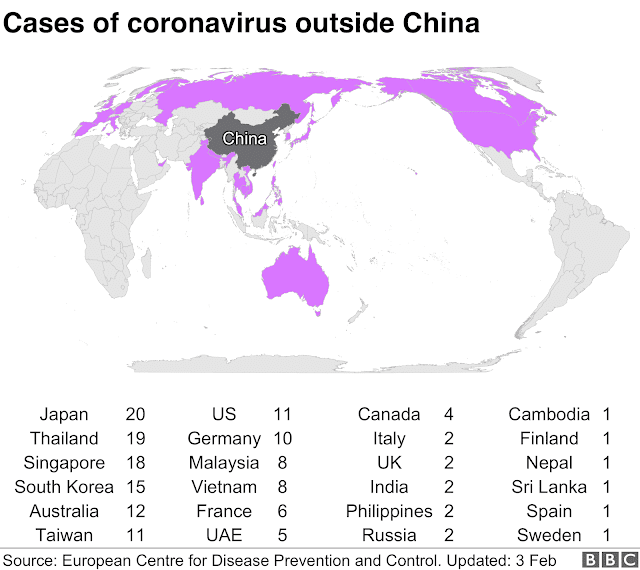 How did China react to the US measures?
In a news briefing on Monday, Chinese foreign ministry spokesperson Hua Chunying said the US actions "could only create and spread fear" instead of offering assistance.

She said the US was the first country to impose a travel ban on Chinese travellers and the first to suggest a partial withdrawal of its embassy staff.

"It is precisely developed countries like the US with strong epidemic prevention capabilities... that have taken the lead in imposing excessive restrictions contrary to WHO recommendations," Ms Hua said, according to a Reuters report.

Do the travel bans work?
Global health officials have advised against the bans.

The WHO has warned that closing borders could even accelerate the spread of the virus, if travellers enter countries unofficially.

"Travel restrictions can cause more harm than good by hindering info-sharing, medical supply chains and harming economies," the head of the WHO, Dr Tedros Adhanom Ghebreyesus, said last week.

The WHO instead recommends introducing screening at border crossings.

On Monday, Dr Tedros again praised China for its commitment to fighting the coronavirus, stressing that the only way to defeat it was for all countries to work together "in a spirit of co-operation".

How deadly is the virus?
More than 75,000 people may have been infected in the city of Wuhan, experts say.
But estimates by the University of Hong Kong suggest the total number of cases could be far higher than the official figures.

A report on the early stages of the outbreak by the Lancet medical journal said most patients who died from the virus had pre-existing conditions.

The report found that, of the first 99 patients treated at the Jinyintan Hospital in Wuhan, 40 had a weak heart or damaged blood vessels. A further 12 had diabetes.

Most people infected are likely to fully recover - just as they would from a normal flu.

An expert at China's National Health Commission (NHC) said that one week was sufficient for a recovery from mild coronavirus symptoms.
(Source: BBC)
Posted by Arjunpuri at 16:35