'These stories don't get told': a paramedic's notes from inside the ambulance

As a paramedic, Jake Jones sees a lot. Writing under a pseudonym, this serving emergency worker offers snapshots of people’s lives at the point of crisis in his engaging memoir, Can You Hear Me?

“When I started writing it, I wasn’t really in it,” he says. “I was writing episodes about patients – not just their clinical experiences, but their lifestyles, their social settings, their family scenarios and all the struggles that people have, because I feel that we get these insights into people’s situations which are quite intimate, really. It’s quite a privilege but it’s also eye-opening and I thought that a lot of those stories don’t get told.”

With poignancy, humour and compassion, Jones invites us into “the invigorating chaos of pre-hospital care”. The encounters are fleeting – average patient contact is about an hour – and the stories stop at handover.

The lottery of callouts offers a panorama of experiences: the mundane, the ridiculous, the heartbreaking and the tragic. From the desperate drug addict who urinates on the ambulance floor when denied a fix, to the woman who would rather call an ambulance than read the back of a packet of paracetamol; from Reggie, a frail and disabled 46-year-old man, lying in the dark on his bathroom floor for two hours after a fall, to Sharon, difficult to the core, but ultimately calling an ambulance because she is incredibly lonely. Jones evokes the controlled sprint to a heart attack victim on a football pitch and the desperate sadness of the call that “no one wants to receive”: the infant who doesn’t wake up.

“We go to everybody, anywhere, with anything happening to them,” Jones says. It was coming across people such as Peggy – an elderly woman living on a sofa in her front room – that made him decide to start writing five years ago. Surrounded by ice-cream tubs full of urine, Peggy has “reduced her world to what she can reach”, Jones writes. And isolated people like Peggy, often on the margins of society, have voices we seldom hear.

“There is someone like one of these characters living on everybody’s street,” Jones says. “They come in and out of their house and nobody knows what is going on behind their door.”

As he assembled pictures of lives glimpsed through emergency calls, Jones realised he could pull these stories together by telling something of his own. But there were limits to how much he could reveal. Bound by the requirements of patient confidentiality, he worried that identifying himself could make it possible to identify the patients he described, or that being recognised when he arrived at an emergency might interfere with his work. So he decided to remain anonymous.

With patients uppermost in his mind, Jones won’t say much about his own life. He says he studied English at university, and has written “bits and bobs” over the years. He is even reluctant to say which city he works in. He’s not trying to be awkward, he says apologetically, it’s just that he fears that offering details about himself could see someone, somewhere, piecing it together.

In the book, he describes how he felt stifled in an office job and wanted to do something completely different, preferably outdoors. So he applied to train as a paramedic – despite having failed to stay upright during the birth of his son, and a “vague phobia of red sticky fluids”. He writes that he’s a family man, a “fairly normal person” doing a slightly unusual job. What else can he tell us? Not much.

Writing under a pseudonym could allow an author “to reinvent yourself”, Jones concedes, but says he can’t see the point in doing that. He’s added some “noise” to each story, he explains, changing names and locations to protect his patients’ identities, but he has “tried to be honest and not to clean up things retrospectively”. The names and settings may have changed, but writing anonymously has “allowed me to go into more depth, be more specific and add a level of detail which I wouldn’t have been happy to do otherwise”.

The paramedic spends each shift on the streets, up through blocks of flats, down into dark, rubble-strewn basements and everywhere in between. But even if the blue lights are flashing, an ambulance isn’t always shooting off to give “critical care in strange locations”. Paramedics often attend a call that turns out not to urgent or even medical in nature, Jones writes, and the medicine he dispenses most is common sense. Explaining how to use that packet of paracetamol is a constant part of his working life. 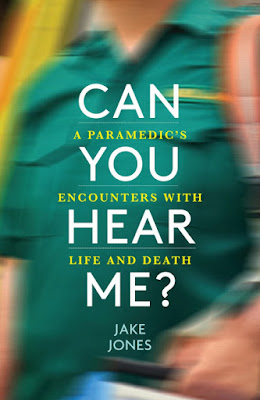 Can You Hear Me? doesn’t shy away from the challenges and strains facing emergency workers – the public-facing nature of the ambulance service means paramedics are confronted every day with awkward bystanders, verbal abuse, threats and even violence. But Jones says that he has tried to provide a rounded picture of his career and the reality on the ground. His employers know about the book and are satisfied that the anonymity and confidentiality of patients has been preserved. But the people he works with day to day have no idea that he’s been secretly scribbling. He’d like to think that if they read it, they would feel that it gives a faithful portrait of a paramedic’s life. “I hope it’s reasonably true to the range of things that we go to.” It’s just a shame the readers won’t know who the author really is.

- Can You Hear Me? A Paramedic’s Encounters with Life and Death, is published by Quercus on 6 February.

(Source: The Guardian)
Posted by Arjunpuri at 03:00