Donald Trump was reluctant to name Mike Pence his running mate in 2016 because he thought the then-governor of Indiana was a “loser” who didn’t stand a chance to be re-elected in his own state, according to a former campaign official.

Former campaign manager Paul Manafort had suggested Mr Pence as the vice presidential candidate on the ticket, but then-candidate Trump “wanted someone in his mind who was a winner,” according to Mr Manafort’s deputy Rick Gates, whose book Wicked Game: An Insider’s Story on How Trump Won, Mueller Failed and America Lost is set to be published this month. 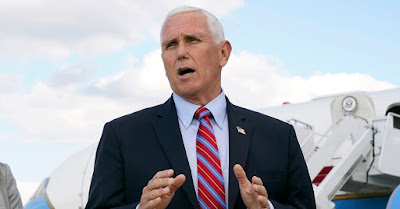 Mr Gates, in an interview with the Yahoo News podcast Skullduggery, said that Mr Trump had initially suggested his daughter Ivanka Trump as his running mate.

“The important assets to him are family, trust and loyalty,” Mr Gates told Yahoo News.

His children become more engaged with the campaign and attended nearly "every meeting” as the campaign progressed, he said.

Other running-mate suggestions came from within the president’s inner circle and familiar GOP figures who aligned with the president.

Mr Trump, who was provided a list of potential candidates, soured at the idea of tapping Governor Pence, as polling data from the 2016 gubernatorial race revealed that the incumbent was down by 10 points.

Then-candidate Trump “didn’t think he had a chance to win the governor’s race,” Mr Gates told Yahoo News, "which is why he used the term ‘loser,' which he has used with many people, as we know.”

Instead he wanted “someone in his mind who was a winner,” he said.

“Why would I want a guy like that to be my VP?” Mr Trump said, according to Mr Gates’ book.

Following White House turbulence after several positive coronavirus diagnoses among Republican officials, including the president and First Lady Melania Trump, Mr Pence – second in line for the presidency if Mr Trump is not able to serve – has emerged from the president’s shadow into highly scrutinised spotlight of his own.

Should the president win re-election, Mr Pence could face the prospect of a White House run by 74-year-old Trump recovering from the disease and its longer-term impacts.

The campaign had struggled to convince Mr Trump to choose the Indiana governor, made more difficult with Mr Pence endorsing Texas Senator Ted Cruz in the Republican primaries.

Mr Manafort had tried to convince the candidate that his running mate should be “someone different from him, ” Mr Gates said.

But Mr Trump “is that individual," Mr Gates said.

According to Mr Gates, Mr Manafort told Mr Trump: "Why would you want someone like you as your VP? You are the hatchet guy."

Mr Gates also worked under Mr Manafort while he served as a consultant for the Party of Regions in Ukraine. Both men were indicted by special counsel Robert Mueller for campaign finance crimes and failure to register as foreign agents during 2016 elections, to which Mr Gates pleaded guilty and served as a cooperating state’s witness in Roger Stone’s trial.

Mr Manafort pleaded guilty to conspiracy to defraud the US and witness tampering as part of a plea deal and was released from prison in May 2020 to serve the remainder of his sentence in home confinement.