'Our wish, our photos': Couple abused and trolled for viral wedding shoot respond

The couple, who got married in September, did a photoshoot recently and uploaded the pictures on social media.

Quirky, candid, romantic — pre-wedding or post-wedding photoshoots have become a ritual beyond the ceremonies for many young couples. When Hrushi Karthikeyan and Lakshmi got married on September 16, they could not hold an extensive wedding ceremony or do a photoshoot due to the COVID-19 restrictions. But when they decided to get a photoshoot done recently, the couple had a theme in mind — a boudoir session, where the couple ‘appear’ scantily dressed. Hrushi and Lakshmi chose to drape white sheets around them for their photoshoot.

With the help of a photographer-friend Akhil Karthikeyan, the couple got the photoshoot done at a beautiful spot among the tea plantations in Vagamon in Kerala’s Idukki district, where they celebrated their honeymoon last week. 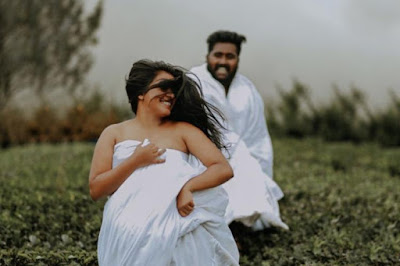 “Most wedding shoots are cliched, where the bride and the groom, wearing traditional veshti and saree, hold hands and walk around the temple. We wanted to do something different and decided to do a post-wedding shoot,” says Hrushi. The idea was suggested by Hrushi’s family friend Akhil Karthikeyan, who runs Wedding Stories, a wedding photography company based in Thrissur.

The couple, who had already uploaded their wedding ceremony pictures on social media, put up these post-wedding pictures, too. However, their excitement was short-lived. Soon after they posted the pictures on Facebook on Thursday, the pictures were met with abuse, trolls and vulgar comments from social media users.

Well, the reactions to the photographs were predictable. While a few people appreciated the couple and the photography, and others criticised in a respectable way, many posted derogatory and abusive comments.

“Both of us were very much clothed throughout the shoot. It is impossible to not be clothed as we were shooting outdoors, in a rather public place in Vagamon. That the photographer was able to capture aesthetic shots of us, is purely his creativity and camera skills. However, most users, especially on Facebook, began moral policing me and my wife over the nature of the pictures,” says Hrushi, adding that none of his family members objected to this shoot.

Speaking to TNM, Lakshmi said "I am somebody who wears off shoulder clothes and shorts. Showing my neck or legs does not qualify as nudity. But I was hit with a storm of horrible comments when the pictures were posted on Facebook. Initially, we responded to some of the comments, but then the pictures went viral and it was overwhelming to have to respond to trolls. So we decided to ignore it."

Hrushi also said that while the comments on Instagram, where Wedding Stories had posted the same photos, were positive, most of the comments on Facebook were abusive and vulgar.

“If a woman wears anything but a saree in Kerala, the male gaze immediately changes, insults start pouring in, not to mention the moral policing and slut-shaming that follows,” he says, adding that Lakshmi’s family began to feel uneasy due to the social media abuse. 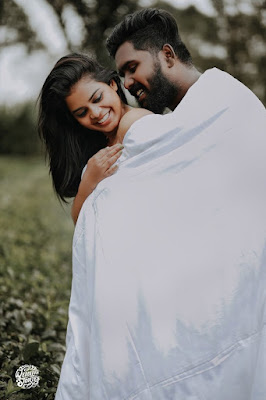 Many abusive memes, too, have popped up after the photos were uploaded on Facebook.

Apart from trolls, Lakshmi says her neighbours and distant relatives too called up her parents and complained.

“They kept talking about privacy and why we would shoot 'something' (the intimacy) that should be done within four walls.

On the internet, they slut shamed me and insulted my family and posed questions such as “are you wearing clothes underneath?,” she adds.

Lakshmi says she had a conversation with her parents and cleared the air. “They realised that people are of different sorts and that it doesn’t work if we have to consider the opinion and judgements of everybody else,” she adds.

Despite the harassment, Hrushi and Lakshmi don’t intend to take down the images from Facebook. They have also decided not to respond to the trolls, or take legal action.

“This will fizzle out in a day or two and I don’t want to waste my energy on responding to these trolls. So, I will not file a police complaint,” says Hrushi.