The UK’s coronavirus epidemic could plateau in the “next week to ten days”, according to an epidemiologist advising government, who also suggested lockdown restrictions could be relaxed by the end of May.

Professor Neil Ferguson, an infectious disease modeller at Imperial College London and member of the government’s Scientific Advisory Group for Emergencies (SAGE), however, warned that high levels of infections could continue for weeks after the peak of the disease if people flout social distancing rules.

His remarks follow ministers ordering the public to obey government lockdown restrictions this weekend and to stay at home on what is expected to be the hottest weekend of the year so far, in order to help protect the NHS from an upsurge in covid-19 cases.

Speaking to BBC’s Radio 4 Today programme, professor Ferguson said there had been an 85 per cent drop in typical social movements “outside the household” since the lockdown was introduced by Boris Johnson almost a fortnight ago. 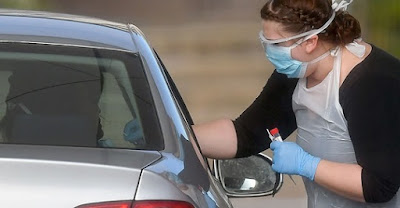 “But I would say the key issue we’re trying to understand at the moment is how fast the epidemic will fall,” he said. “That isn’t completely clear. We expect it to plateau really in the next week to ten days – it’s hard to be more precise than that.

“Then we can see two possible options: a very slow plateauing decay of infections over time and demands on the healthcare system, or perhaps a rather faster one.”

He said the end result would be “critical” how people behave in the coming days and weeks and when pressed on the scenario of social distancing rules being ignored by the public, he added: “That moves us to a slightly more pessimistic scenario. We still think things will plateau but we’ll be at quite high levels of infection for weeks and weeks rather than seeing quite a rapid decline like the type seen in China.”

It comes after professor Graham Medley, a pandemic modeller advising the government, warned that Britain had “painted itself into a corner” with no clear exit strategy from the coronavirus criss.

He told The Times: “This disease is so nasty that we had to suppress it completely. Then we’ve kind of painted ourselves into a corner, because then the question will be, what do we do now?

“We will have done three weeks of this lockdown, so there’s a big decision coming up on April 13. In broad terms are we going to continue to harm children to protect vulnerable people, or not?”

Prof Medley added: “If we carry on with lockdown it buys us more time, we can get more thought put into it, but it doesn’t resolve anything, it’s a placeholder.”

Asked about these remarks, professor Ferguson said: “I wouldn’t put it quite as bleakly as that. There is a great deal of work underway to look at how we can substitute some of the very intense social distancing currently in place with a regime more based on intensive testing, very rapid access to testing, contact tracing.

“But in order to substitute that regime for what we’re doing now we need to get case numbers down.

“I’m hopeful while we don’t have all the answers about how we’ll do it yet, that I’m hopeful in a few weeks time we’ll be able to move to a regime which will not be normal life – let me emphasise that – but will be somewhat more relaxed in terms of social distancing and the economy but relying on testing.

“We don’t have all the answers, but clearly we want to move to a situation where at least by the end of May that we’re able to substitute some less intensive measures – more based on technology and testing – for the complete lockdown we have now.”

Jeremy Hunt, chairman of the Commons Health and Social Care Committee, said testing was the “key” for the UK to exit the coronavirus lockdown.

“That approach, we can now see, is by far the most effective at suppressing the virus. If we can ramp up the testing in line with the ambitions laid out by the Health Secretary, then that is the key for our exit route.”