If it were not for this seemingly fateful chain of events, I do not think I would have ever come across this charming tale of wonder and fear and empathy. All of these emotions feel re-created on the book’s cover, which magnifies and directs your attention to the period of the question mark, which appears target-like, a red dot encircled by other circles. Written by Crosby Bonsall for the “I Can Read!” series, which Harper Collins launched in 1957 with the publication of the now-classic Little Bear, by Elsa Holmelund Minarik, What Spot? is now out of print.

Rather than trust that my son would be able to choose the same book each week, I bought a used copy. It arrived well-loved, with damaged pages, signs of its former life. I delighted in seeing my son pretend to read the book aloud on his own, so simple was its two-syllable, incredulous refrain, punctuated by a question mark that seems conjoined to an invisible exclamation point. 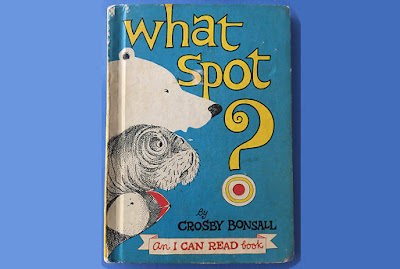 Two days before we entered the stay-at-home phase of our lives, my son went on a field trip to see a production of The Princess and the Pea. His teacher sent us a PDF that explained to children how to prevent coming into contact with the coronavirus. She told us she read the poster to the children to reassure them. She also reassured us, saying that she would have the children wipe down their theater seats and wash their hands.

Time was once less abstract, more palpable. I once could ask how school was. I could say tell me about the play. I could let my children know what they would need for school the next day. I could pack lunches and backpacks. I could check my work email after sending them off. I could have a day, a day that was measured and complete, one that I did, indeed, measure out with coffee spoons.

Now, my children and I dream the dizzy dreams that manifest in between reality and a life once lived.
They do not want to do their school work. I give them other activities instead. Okay, I say, forget it. You don’t want to write about that fairy princess book, then write about what you want to write about. My daughter begins to pen a fantasy in which she rescues newborn kittens and nurses them in the wee hours of the night. I say, That’s beautiful. I say, That’s great. My god, I don’t care, just keep writing. I say this while I myself have ceased writing.

My son can now read What Spot? on his own. He’s in first grade, but, like studies have shown, being avidly and abundantly read to during his infancy and early development have accelerated his reading, which is now on a third-grade level. That said, he doesn’t like to read, doesn’t want to read, preferring instead to be read to. He loves being read to, and I, his dear mother, love to snuggle, smell his little-boy head, and read to him. Sometimes, he’s inspired to read certain parts, certain pages, certain voices, and I pause and allow him, savoring his little-boy voice, his small struggles against the shore of vowels and consonants. It is a voice inside a seashell; I know this, this ephemeral nature of children and their coos and their calls. The voices can cease to call. I savor the calling.

My family and I once marked time by the passing of it; we now mark time simply through the unknowing and unowning of it. My son comments on his weather journal—we’ve had so few sunny days. We’ve had so few days, I think, sun or no.
But we have had days. My friends text me, as if to reinforce it: How are you 4.5 weeks in? Four and a half weeks in, and I haven’t done much of anything.

What Spot?, published in 1963, features a lonely walrus adrift on an icy island. He watches the sea and the ships that drift by, happy and content, day after day, until, one day, he sees a black spot in the snow. Needing reassurance that he is not the sole witness to something that may or may not exist, he implores a puffin, whom he befriends, to see it, too.

I once measured my days through providence. One summer, when life made little to no sense, I was devoted to a certain astrologer, whose horoscopes were so aligned with my circumstances, so empathetic to my struggles, so in tune with my discord, they made me believe, however briefly, that my fate was somehow tied to the stars. Despite being schooled to believe otherwise, I could believe that my life, and thereby my fate, were linked to celestial bodies, ancient and everlasting.
I know now, though, that fate is privilege. When my sister’s cancer was discovered, the once-indiscernible spot had already spread, flared, took over—a target without a target. The doctors tell her what they alone can see, what she herself cannot see. Validation, in this case, is anything but reassuring.

Nevertheless, the walrus wants to know what the spot is that lies in the snow, the spot that he alone can see, even if what lies beneath is dangerous or maleficent. Unlike tales of exposure prompted by a fervent curiosity that leads to the unleashing of evils or maladies, it is not curiosity that drives the walrus: he’s worried that not only is the spot “a thing,” but that the spot is the nose of creature who is buried in the snow.

Since we’ve entered the new life, the one without temporal beams, we’ve witnessed the red spots mushroom, blooming poppies, scarlet sequins blistering the earth map we once treaded.
They didn’t believe her, my son said when I asked him about the play. The princess had indeed felt the pea, but no one believed her.

Eventually, the walrus is able to convince the puffin to look harder, even if where to look is merely the ether of a nebulous “there”; however, the Puffin can’t be convinced that the Spot is “a thing”—he’s adamant that “it’s nothing, nothing at all.”
It could have been nothing, nothing at all, but the uncovering revealed spots in the breast, the lymph nodes, the adrenal glands, the liver.

The walrus wants to unearth the creature, whose black nose—that little, barely discernable spot—he thinks, is showing through the snow. The puffin won’t help. The black spot, after a bit of digging, is a black stick. The Walrus thinks it might be a sea snake or “a great big bird.” After more digging, two eye-like circles appear; the walrus becomes more convinced that he must help this creature out of the snow, and, as it begins snowing hard, he works faster and more furiously, determined to help this creature and keep it from being buried forever, even though that creature might harm others. The walrus wants to save a life, even if he doesn’t know his own fate—he wants to change the course of fate for this unknown creature.

In 1963, when What Spot? was published, the United States began administering the oral polio vaccine, which apparently could be taken with a sugar cube.

My daughter’s fears are mostly invisible, things that she sees in her head. Like the puffin, I spend a great deal of time and effort to reassure her that it’s nothing, nothing at all. But I know her terror is “a thing,” and what she fears may or may never be uncovered.

The puffin, however adamant that the “thing” is “nothing at all,” finds himself in a terrifying bind when, unearthed, the “thing” puts his life in danger. All of a sudden, the “thing” is something. A child will easily recognize the “thing” to be an ordinary, harmless, red toy wagon, but for the puffin, who still insists that the wagon is “nothing, nothing at all,” the toy wagon becomes a thing that could kill him. The wind blows hard and rolls the wagon and the puffin haphazardly over the ice and perilously close to the consuming sea.

My son doesn’t get why the other creatures who spy the puffin and hear his cry for help, rather than aid the Puffin, just nonchalantly say, “Don’t worry. It’s nothing, nothing at all.” The other ice creatures go on with their ice-creature lives: a polar bear enjoys a bath in the sea; a seal plays with a snowflake; a dog rolls snowballs; a reindeer dances; a whale rests on a wave—all of them oblivious to disaster, all of them noticing yet denying the danger, downplaying the fear.

Eventually, the puffin and the wagon fall into the hole from whence the wagon came and become entombed completely in snow excepting the black spot of the puffin’s nose. The polar bear asks what the walrus is looking at. It is the same old story, but now, now we know that the walrus knows.

He knows now that the nothing is something. He tells the polar bear that the spot is not a spot, but rather “a puffin I know.”

They didn’t believe her, my son said. But she felt it.

The walrus quickly unearths the puffin and the wagon. They throw the wagon into the sea. When we get to that part of the story, my son says, “Oh, Greta Thunberg wouldn’t like that—she’d tell them ‘you ought to be ashamed!’” I laugh, as he intended for me to: the funny notion of imagining the book in this new now.

The end of the world is what my daughter worries about. She doesn’t like time passing. Her fear of time is her fear of mortality.

I no longer rely on horoscopes to tell me what it is I should be paying attention to or what I should do to protect myself against ill fortune; I no longer use it to receive validation that these bright spots in the firmament might mean anything other than their own bright glinting.

To feel something rather than nothing: maybe that’s what I mean by fate.

My sister asks if she’s going to die; my daughter says that she doesn’t want me to grow old and die. To both of them, I reassure that death is nothing, nothing at all, that we’re okay, that’s everything’s going to be okay.

They didn’t believe her, my son said. But she felt it. She felt something rather than nothing.

I look at the bright spots of red, the measles rash taking over each screen I see, a blood peony bursting over the city in which my sister lives; I think, it’s a puffin I know. Each spot is a puffin I know.

(Source: The Pars Review)
Posted by Arjunpuri at 03:00