Coronavirus: How to grieve a loved one when you can't say goodbye

Dealing with the death of a loved one is one of the most difficult things we have to go through in life. Now, coronavirus is making it even harder for people to say goodbye. 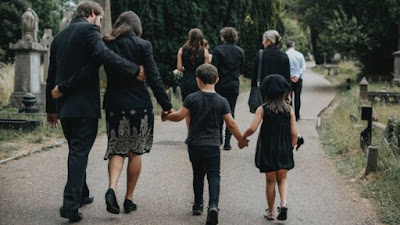 The stark reality is that, to keep everyone safe from the virus, the very sick and dying cannot have their family around them. Funerals cannot be conducted as planned. And people cannot grieve together.

But there are still ways to celebrate and mourn those we love and bid farewell in a meaningful way.

'The hard thing was not being together'
Dr Nick Schindler, a paediatrician at Norfolk and Norwich University Hospital, knew that when his 99-year-old grandfather John Cohen went into hospital last week with a chest infection it was unlikely he would be coming back home.

"Normally one of us would go with him," he said. "We would be there to discuss things and pass them on to the family.

But we couldn't do that so we had to do it remotely."

He said staff at London's Royal Free Hospital were "absolutely wonderful" but only had "limited time" to speak on the phone.

It was decided that one person could visit the hospital if they wore personal protective equipment (PPE) - including a mask - and then isolated for 14 days afterwards. Dr Schindler's aunt, the youngest of three siblings, went.

"At that point, we knew there was going to be a funeral. And so she did that, knowing she then wouldn't be able to attend it."

Dr Schindler, 32, said by the time his grandfather died none of the family felt there was anything left unsaid, but "the really hard thing was not being together".

On the day of the funeral, he was isolating at home as his two-year-old son Ben had a fever. Unable to be there in person, they live-streamed the funeral on Zoom, with a total of 12 relatives watching from three different countries.

His mother, father and sister were the only ones who attended - his sister staying two metres apart from her parents.

After the funeral, the family members had another Zoom meeting, raising a toast and sharing stories. The family invited people to sit shiva with them, in the Jewish tradition, which was also done remotely.

Dr Schindler admits "it just doesn't seem real still", but he takes comfort from his belief that his grandfather is now reunited with his wife, who died 10 years ago.

"He must be so happy to be spending time with her," he says. "I don't think any of us felt that we could regret him dying. We felt like we'd held on to him for so long."

"It's terrible seeing families sitting six feet apart, not able to reach out to each other," she said. "And can you imagine how awful it is choosing who attends a funeral?

"Coronavirus has turned funerals into something we don't recognise. People have rituals they expect to take place when someone dies, including being physically together.

"This trauma of coronavirus has changed how we live and die, and it has changed funerals."

Ms Champ, who is also an author and grief specialist, said it would be kinder to have a clear government directive saying cremations or burial currently had to take place with no friends or relatives present.

"People are less aware of hygiene when they are grieving - things like touching tables and chairs, or blowing their nose.

We have to be careful where the health of the bereaved, funeral staff and cemetery or crematorium staff are concerned."

She urged people to "focus on the life that has been lived" and not "get stuck on the manner of death or the funeral".

If you can't attend a funeral she says people can light a candle in front of a photograph of loved ones at the same time it is taking place. "It helps to create an emotional connection. Or you could set up a memorial altar for them and offer up thoughts or prayers.

"Talking is so important as well - sharing feelings with someone. And don't be afraid to allow silence, or tears."

'Loved ones know we love them'
Andy Langford, clinical director at Cruse Bereavement Care, says he would encourage mourners to stay in contact with each other by phone or online - and to support those who are grieving.

"It's not necessarily about having the right words to say because there aren't always the right words. But you can be there for them and say you're thinking of them. It can feel pretty lonely right now, but if you've been bereaved it's even more so."

Sue Gill, a 26-year volunteer at Cruse, usually helps support children through grief - something she is now having to do through speaking to their parents or caregivers on the phone instead.

"I think those final moments with somebody are really, really important," she said. "That's when we get the chance to say our goodbyes and tell everybody we love them. And they've been taken away from them.

"But our loved ones know we love them. Perhaps we don't say it enough, but that knowledge is inside everybody."

She says memorial events can always be held in the future. "It will be a much better way of saying goodbye and having everybody come together," she says.

"That is something to plan for as part of the grieving process, to be able to say goodbye collectively - to have a cup of tea and a bun and laugh at memories together."

What does Public Health England say about funerals?
(Source: BBC)
Posted by Arjunpuri at 10:30