Taipei Economic and Cultural Centre’s deputy representative Mumin Chen urged Indian researchers and historians to study the disappearance of Netaji and his legacy at the country’s National Archive.

The Taipei Economic and Cultural Center in Delhi, also known as the Taiwanese Embassy, has announced that the Taiwan govt has decided to open up its National archives to study and rediscover the legacy of Netaji Subash Chandra Bose. While speaking at the 125th Birthday Celebration of Netaji Subash Chandra Bose organized by FICCI on Saturday, deputy representative Mumin Chen urged Indian researchers and historians to study information about Netaji and also his legacy which has had a huge influence over Taiwan in the 1930s and 40s.

While speaking at the event, Chen elaborated on the link of the Indian Independence struggle and its attempts in Taiwan which was then under Japanese occupation. Speaking about the Indo-Taiwan historical connections, he mentioned, “With India and Netaji, we have historical connections” that Taiwanese did not know…In the 1940s, Chiang Kai-shek (Former President of the Republic of China) wrote about Netaji in his diary. He felt sympathy…

decision to cooperate with Japanese fight for independence is understandable.” Chiang Kai-shek who ruled Taiwan until 1975 is known for his strong resistance to Japanese forces during World War II. While it is also known that Netaji had asked Japanese help to overthrow British rule in India with the Indian National Army. Chen, while narrating incidences of Netaji on the Taiwanese soil said, “Taiwan before 1945 was a Japanese colony, that is why Netaji stepped on Taiwan in 1943, and then in 1945, he came to Taiwan for the second time.” 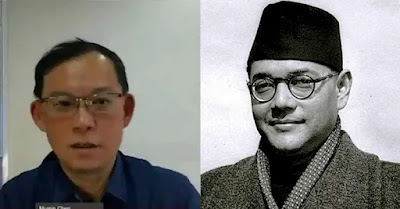 The Taiwanese diplomat in Delhi then urged that the National Archives and other databases of information are open for Indian scholars and historians to study. He asserted that a lot of young historians interested in studying South-East Asia and India are in Taiwan. “A lot of historical documents and evidence on Netaji, and the Indian Independence movement are in Taiwan. Right now, very few Indian scholars know about it,” he added. Mumin Chen also elaborated on the bilateral need for India and Taiwan to “re-examine and re-discover the common history of Indo-Pacific” through shared common connections.

The controversy over the suspense of Netaji’s death refuses to die down. It is known that Netaji, after the plane crash in August 1945 was taken to Army Hospital in Taipei where he breathed his last. The interesting development comes when the Prime Minister of India, Narendra Modi is all set to unveil the hologramic statue of Netaji Subhas Chandra Bose at the India Gate on the occasion of his 125th Birth Anniversary.