2-year-old boy thought Encanto character was him: "It was the impact of feeling seen"

If seeing is believing, count 2-year-old Kenzo as a true believer in the power of representation.

This week, during a family viewing of Disney's Encanto, Kah Brand noticed the moment her son realized that one of the characters, a young boy named Antonio, looked very much like him.

"He seemed to be in awe, just smiling and staring at the screen," she told POPSUGAR. "Then he stood up and looked back at his dad and me, still smiling. For him, I truly believe that he thought he was seeing himself because of the resemblance between him and Antonio." 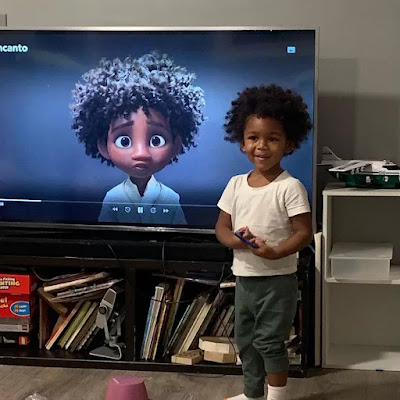 "It is essential for Black children to feel seen and to be connected to positive and empowering images for their self-esteem."

Kenzo's not alone: when Kah posted the picture of him proudly standing next to the TV screen to Instagram, her friends and family couldn't contain their excitement over the similarities.

"As a mom, I'm always trying to capture 'these' moments," she said. "I was amazed at his reaction. It just truly made me smile and my heart happy."

But for her, it was not only the resemblance that mattered.

"It was the impact of feeling seen," Kah added. "It is essential for Black children to feel seen and to be connected to positive and empowering images for their self-esteem." 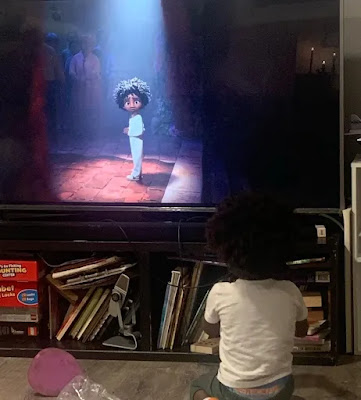 In fact, Encanto prompted a conversation in her home – one in which everyone tried to think of a character from their own childhoods with which they connected.

"But these characters weren't around," she said, referencing her own generation. "We didn't have this growing up.

What's so special about Encanto was that it didn't stop at just showing us brown characters. It showed the diversity in hair textures and skin tone. I'm so grateful for moments like this because I'm aware of its impact, especially for brown boys and girls. It brings joy to our family. There's power in representation and magic in creativity. This generation and future generations will experience inclusivity because the film industry is moving in a direction that reflects the true diversity of our world."

Posted by Arjunpuri in Qatar at 03:30