‘Santiniketan taught us that there is no such thing as worthless activity’: Mahasweta Devi

Remembering the writer and activist on her 96th birth anniversary with an excerpt from ‘Our Santiniketan’, translated from the Bengali by Radha Chakravarty.

About the plants and trees of the Santiniketan that lives within my heart, I feel compelled to say more.

The neem trees will feel offended if I don’t give you a proper account of them.

The neem trees that I know belong to three varieties. Akash neem, mahaneem and ghora neem. All three varieties blossomed in the warm month of Chaitra, and their fragrance filled the air. I saw the flowers, some white, some blue, but I can’t say which type of neem had white flowers and which had blue.

I can say for sure though that just in front of Sri Bhavana, beyond a spreading sirish tree, stood a row of neem trees, stretching right up to the end of the path. Today, the Sabars bring me neem honey and neem oil. And all year round, I consume boiled neem leaves.

In front of the Kala Bhavana flourished a “jambuvana” or jamun grove. Why call it a grove? Because it was a unique type of jamun tree. Not the familiar high-crested black jamun, but low-growing trees that spread their boughs long and wide. As far as I can recall, none of these trees grew even to the height of an ata tree.

There was no dearth of fruit. Not too fleshy, the stone so large it felt like mango seed. Not too sweet either. But you could carry some salt wrapped in paper, and gorge on the fruits endlessly, until your throat began to choke on the bitter jamun sap.

Our entire cohort would invade the jamun grove together.

“What clever jamun trees, bhai!” Kitu (Krishna Roychoudhury) would exclaim. “Not growing too tall. How easily we can enjoy the fruit.”

I’ve never seen such jamun trees anywhere else. They were just right for a place like Santiniketan.

Very profound, cheerful and large-hearted was the Ghantaghar, the bell tower, located beyond the library, to the right (am I correct?). A giant banyan or peepul grew there. And other trees too: bakul, jamrul, gaab and sapeda. Close to Chhatimtola was a hapless tree that bore sour fruit which we knew by the name of “nol”.

That was the tree a boy from Garhwal (was his name Vinay?) tried to climb, when he slipped and fell, fracturing a bone. The name “banapulak” (“rapture of the forest”) was given by Rabindranath to the tree that grew to the left of the path to Uttarayan. It bore clusters of blossoms resembling hasnuhana, exuding a sweet fragrance.

To the left, on the way to Uttarayan, the road had a culvert, and below, on a deep slope, was the house where Sebak-da lived – Sebak Sen and Jamuna-di. Mastermoshai’s younger daughter Jamuna-di played the role of Kurupa Chitrangada in the first performance of Chitrangada. With her sculpted features, as if chiselled in black stone, she was exquisitely beautiful.

To continue what I was saying: in winter, beneath that culvert grew wild, flowering shrubs. In the month of Chaitra, those shrubs had dried up, but the ripe kul fruit still grew on every branch. Down I jumped, from the edge of the culvert, without a thought. Who was to know that, lying coiled under the bushes, was a hibernating gokhro snake? It was clear to me that all that stood between the snake and my feet was a kul shrub. I also realised that the coiled form was moving, beginning to unravel.

The boys reached out to me.

“Khuku! Grab our hands, bend your legs and clamber up!”

Thankfully for us, Sebak-da came rushing to the scene. (I think he taught us arithmetic.) Getting to the road, he yanked me up. And killed the snake as well.

And after that, a storm of scoldings! We beat a hasty retreat.

Near the rail tracks grew wild kul shrubs. Crossing the Khoai, we’d go in search of the wild kul. At Uttarayan, on the wall of Bouthan’s (Protima Devi) private garden, Rathi-da had painted a guava tree in playful strokes, styled exactly like the trees in Mughal paintings. A branch of the tree, twisted around and secured to an iron hook on the wall, looked quite wonderful.

To our eyes, the most miraculous flower was the yellow palash from Goalpara village. A pure yellow, like the atasi blossom. Later, in 1945, when Abanindranath was Vice Chancellor, we went to him once and found him gazing in rapture at a yellow palash flower placed in front of him. Between the Shyamali and Udichi buildings, did they later plant a yellow palash tree? I forget.

Rabindranath educated us in the idea of beauty in the design of houses. And beauty in naming a house – that too was a lesson to be learnt from him. Amiya Chakravarty’s elder brother Arun died before his time. “Aruni” was the name chosen by their parents for the house they built in Puri. I believe that Rabindranath’s influence had something to do with it.

We saw birds. Birds of many species. In the years 1936-38, immediately upon entering Uttarayan, one saw an enormous room to the left with a metal grill in front. A pair of snow-white peacocks resided there. Someone must have gifted them to Rabindranath. When the rains approached, the peacocks would spread their fans and dance. That was a sight worth watching.

Santiniketan trained our vision. Learn to see, learn to see!

Chhabighar, the picture gallery, was located directly in front of the kitchen. So many pictures to be seen there! For a week they displayed a Chinese painting. The paintings were put up there by the teachers and students of Kala Bhavana. Then came a Japanese painting, then others. Everybody viewed them. In their comings and goings, they saw the pictures.

Observing images is also something to be learnt. I didn’t learn. Thanks to Baba, right from infancy, we were used to seeing paintings at home. The Jibansmriti edition of those days carried a painting by Gaganendranath. I still recall the lines jal parey pata narey, and daibadurjogey aparahata sei kalo chhatati dekha diyachhey. After reading Jibansmriti, I went to Santiniketan. This impossible addiction to reading was the reason why I learnt to recognise life and the world through my experience of books. That is what I believe now.

In Patha Bhavana, Jadupati-da offered art lessons. Sometimes he took us to Kala Bhavana. From morning to evening, what a varied work schedule!

A work schedule, indeed! Identifying trees, raiding fruit trees, and in the rains, running towards the Kopai with Jiban-da and Sudhir Gupta-da, all of us getting soaked together, learning how to swim as we plunged about in those red, muddy waters during that downpour – these were forms of action, after all.

Every so often, listening to the baitalik songs at night, joining in the singing (was that in my college days?) – all that was action too.

Santiniketan taught us that there is no such thing as worthless activity. 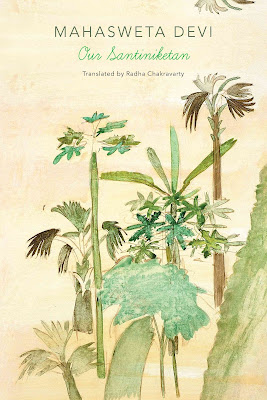 Excerpted with permission from Our Santiniketan, Mahasweta Devi, translated from the Bengali by Radha Chakravarty, Seagull Books.

Posted by Arjunpuri in Qatar at 03:30