The origin of my laugh

When my mother died, her best friend Heidi called and told me, “What I’ll miss most is her laugh.”

When my mother called me on the phone before she died, she rarely laughed but often cried.

My mother had four daughters, and I am the oldest. My mother did not raise us. We had all been adopted: the first of us, by our paternal grandmother; the third, by my mother’s friend; the fourth, by a family in Virginia shortly after she was born. My youngest sister is almost twenty years younger than me—she was eight years old the first time we met. I found a card her family had sent my mother with a still-working cell phone number printed inside, and we set up a meeting while I was in town for a conference. As we walked across the parking lot toward their car, her adoptive mother made an off-hand comment that startled me into laughter. She tripped over nothing and gasped, “You have your mother’s laugh.”

When I was in middle school, I fell in love with a friend’s laugh. It sounded like cute, high-pitched hiccups. I practiced her laugh alone in my room—as if my laugh could be something smaller, something else. Grandma always said she could pick my laugh out of a crowd.

A bat biologist once described my laugh as the sound a crow makes when it sees something really shiny. 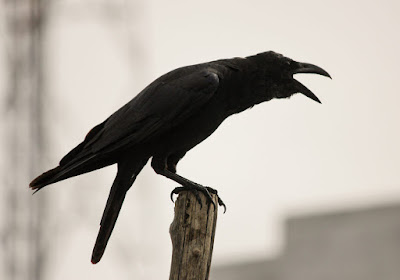 A few years ago, a friend I knew only through voice chat and video games visited me in Boston. More accurately, he visited Boston for a video game convention, but I had invited him and the rest of our guild to my apartment for a dinner of homemade pulled-pork sandwiches, corn bread, and macaroni and cheese. On the train ride down, his phone’s battery died, and he found himself wandering my street in the dark because he couldn’t remember the number of my building. He was about to head back to his hotel when he heard it, my laughter, erupting from the open living room window. “I knew that laugh!” he yelled when I opened the door.

My mother did not want her daughters to return to the Navajo reservation. She kept us from her family to protect us, she thought. But after she died, I reconnected with my aunt, and the first time we talked on the phone, I recognized it, my mother’s laugh, carried hundreds of miles from the land she once called home.

The first time I felt a cotton swab scrape my cervix, I laughed—not because it tickled, though that’s what I told the doctor, but because it was a feeling that was more of a sound: a resonating disturbance of all my unsure places. Laughter is my body’s first, and sometimes only, response. The doctor gave me a panty liner, after, for the blood.

Once, wearing a pair of woolen socks, I slipped down a full flight of wooden stairs. My spine caught the hard right angle of the bottommost step. I managed to limp to the kitchen, where my boyfriend found me laughing hysterically. I could not find the words to explain to him the pain I was in. Weaving circles in circles, I walked my hands around the perimeter of the room and laughed and laughed.

A gnomish systems engineer once described my laugh as the sound pain makes when it hears a funny joke.

After my niece was born, I gifted my sister a copy of First Laugh—Welcome, Baby!, a children’s book by Rose Ann Tahe and Nancy Bo Flood. The story follows the baby’s urban family back to the reservation—to the red earth and the sheep and the Rez dogs—where her parents and her grandparents and her brother and sister all try to make her laugh. In Navajo families, the first person to make a baby laugh hosts the child’s First Laugh Ceremony, a celebration of welcome and community. I have never seen this ceremony—only read or heard about it—and when I visited my niece, she was only one month old. Too young to laugh. She mostly glared at me with her faint, serious brows.

My sister told me after I left that she laughed for the first time in her sleep. My sister asked, “Who throws her party now?”

A few weeks later, one of my colleagues, a Métis poet, waved me into his office and asked me about the First Laugh Ceremony, which he had encountered on Facebook. I told him about how my niece had first laughed in her sleep.

“It was her grandma,” he said, waggling his eyebrows.

“I hadn’t thought of that,” I said, feeling the tears already in the back of my throat.

“It was her grandma,” he said again.

Her grandma, my mother, teaching her the language of home.