The Covid-19 virus may have started spreading through China as early as autumn 2019 – months before Beijing officials reported the country’s first case, a study by Harvard Medical School suggests.

By analysing satellite images, researchers at the university discovered “a dramatic increase” in the number of cars parked outside six major Wuhan hospital in September, with a peak in traffic in December.

“Individual hospitals have days of high relative volume in both fall and winter 2019. However, between September and October 2019, five of the six hospitals show their highest relative daily volume of the analyzed series,” the study states.

The team also found increased internet traffic on search terms relating to Covid 19-like symptoms, such as coughing and diarrhoea, on the Chinese search engine Baidu. 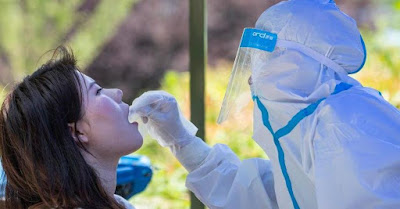 Dr John Brownstein, who led the team and is a contributor to the Australian Broadcasting Corporation (ABC) which first broke the story, accepted that the evidence – yet to be peer reviewed – was circumstantial.

It did mark an important new milestone in attempting to trace the origins of the novel virus, he added.

“Something was happening in October,” Dr Brownstein told ABC News. “Clearly, there was some level of social disruption taking place well before what was previously identified as the start of the novel coronavirus pandemic.”

Several sources in the US have claimed that intelligence services there had detected that a new respiratory illness was circulating in China in late November and subsequently notified the Pentagon.

According to the WHO, the Wuhan Municipal Health Commission reported a cluster of pneumonia cases in the city on 31 December.

Around 40 cases were linked to a local wet market, which was shut down on 1 January. A week later Chinese officials identified a new strain of coronavirus; they shared the genetic sequence of Covid-19 on 12 January.

David Perlin, chief science officer at the Center for Discovery and Innovation in New Jersey, said he was intrigued by the research but questioned some of its methods.

Mr Perlin said the researchers had drawn inferences by “cherry-picking data”, suggesting that the findings may have been over-interpreted.

Previous research published in the Nature Microbiology journal suggests that the novel disease had already established itself and begun spreading in the Wuhan community by early January.

As of Tuesday morning, there were over 7 million cases of coronavirus reported across the globe and more than 406,00 confirmed deaths.

South America is now considered the epicentre of the pandemic, with Brazil last week reporting its daily record number of deaths.