Coronavirus: Up to a third of all Indians living in ‘hotspot’ cities may have been infected, survey finds

Nearly 24,000 samples from 70 districts across 21 states — including 10 hotspot cities — randomly collected and tested by Indian Council of Medical Research

Up to a third of people living in the containment zones of India’s ‘hotspot’ cities may already have been infected with Covid-19, according to the preliminary findings of a leaked report.

The results of a population-based blood survey conducted by the Indian Council of Medical Research (ICMR), obtained by The New Indian Express, indicate that between 15-30 per cent of people in these high-risk areas have been exposed to the virus and recovered unknowingly.

After the research was leaked, the ICMR warned that the findings were “speculative” and had “yet to be finalised”.

The New Indian Express claimed blood samples had been collected from 10 hotspot cities, including Mumbai, Delhi, Kolkata and Jaipur, which account for nearly 70 per cent of India’s overall number of cases. 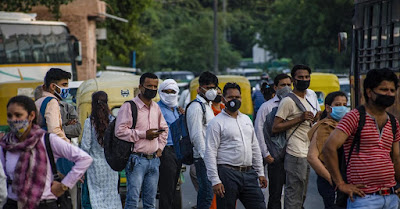 In total, nearly 24,000 samples from 70 districts across 21 states — including the 10 hotspot cities — have been acquired and tested at random. The data for at least eight districts are still reportedly being analysed and will be added in the final report, which is due to be published this week.

India’s National Centre for Disease Control, the World Health Organisation, and state governments all contributed to the ICMR’s survey.

Commenting on the findings, which have been shared with the Prime Minister’s Office, one government source told The New Indian Express: “What we have understood so far is that the infection is much more widespread than what is reflected by the reported cases in many cities and containment efforts may not have fully paid off.”

In Mumbai, Pune, Delhi, Ahmedabad and Indore, the infection rate was found to be 100 times higher than other high-burden hotspots. In contrast, the ICMR’s data suggested there has been little exposure in India’s rural regions, leaving them vulnerable to outbreaks and a surge in cases.

Antibody tests developed by the National Institute of Virology, which have high specificity and sensitivity, according to the ICMR, were used to process the collected blood samples.

Last week, authorities in Delhi said the city’s positivity rate stood at 25.7 per cent, while several districts reported figures above 38 per cent. More than 150 containment zones have been established across the sprawling metropolis, home to an estimated 18.9 million people.

Doctor Shuchin Bajaj, of the Internal Medicine department at Delhi’s Ujala Cygnus Orthocare Hospital, said: “As we are currently in stage 3 of coronavirus pandemic, community transmission is deeply entrenched now. So if one house gets an index case, there is a big chance of a lot of people getting infected in that area.

“Therefore, the government has decided to increase the containment zones with proper sanitisation and social distancing guidelines inside them.”

To date, 7,473 deaths and more than 2670,000 cases have been confirmed in India, according to data from Johns Hopkins University, making it the fifth-most affected nation by Covid-19.