A major incident was declared after tens of thousands of people defied pleas to stay away and descended in their droves on beaches in Bournemouth and other stretches of the Dorset coast.

The local authority, BCP council – covering Bournemouth, Christchurch and Poole – said it was forced to instigate a multi-agency emergency response to tackle issues ranging from overcrowding on the beaches, traffic gridlock and violence. Security guards had to be used to protect refuse collection teams.

Matt Hancock, the health secretary, said on TalkRadio that he had the power to close the beaches if people did not respect social-distancing rules.

He said he was “reluctant” to go down that route as “people have had a pretty tough lockdown”. But he added that if there was a spike in the number of coronavirus cases “then we will take action”. 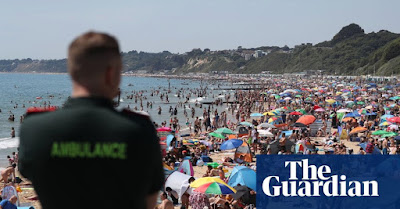 The Bournemouth East MP, Tobias Ellwood, said half a million people had flocked to the beaches and said the situation was so overwhelming that the UK government should step in to help the council deal with the crisis.

He said: “A lot of people have chosen to be not just irresponsible but dangerous. We’ve made such progress tackling this pandemic. I’d hate to see Bournemouth be the one place in Britain that gets that second spike.”

The council leader, Vikki Slade, said: “We are absolutely appalled at the scenes witnessed on our beaches, particularly at Bournemouth and Sandbanks [in neighbouring Poole].

“The irresponsible behaviour and actions of so many people is just shocking and our services are stretched to the absolute hilt trying to keep everyone safe. We have had no choice but to declare a major incident and initiate an emergency response.

“The numbers of people descending down here are like those seen on a bank holiday. We are not in a position to welcome visitors in these numbers now. Please do not come.”

The health secretary, Matt Hancock, threatened to close beaches if physical distancing laws were not adhered to.

“We do have that power,’ he told Talk Radio. “I am reluctant to use it because people have had a pretty tough lockdown and I want everybody to be able to enjoy the sunshine.

“But the key is to do it with respect for the rules – stay with your household, stay a good distance from other households.

“But we do have those powers and if we see a spike in the number of cases then we will take action.”

He wrote on Twitter: “If we do not follow social distancing guidance then cases will rise again. Naturally people will want to enjoy the sun but we need to do so in a way that is safe for all.”

Some motorists had to queue for two hours to get into Bournemouth and car parks were full by 9am on Thursday. BCP council issued 558 parking enforcement fines within a few hours – the highest ever. Families had travelled from as far afield as London and Birmingham to the beaches in Dorset.

People queued for 30 minutes at ice-cream vans and refreshment stalls on the promenade as a police helicopter hovered overhead. At one point a dozen police officers and security guards stepped in as tempers briefly flared between two sets of teenagers.

Phil Horton, 57, from Bournemouth, who works in the timber trade, said: “The number of people here makes me very nervous, and there’s absolutely no respect for social distancing. It seems like everyone has forgotten we are living in a pandemic.

“What can the police do about it? There’s thousands and thousands of people here so they’re massively outnumbered. Good luck telling them to go home.”

Rickie Inskip, a sports therapist, unfurled a banner reading: “Don’t be mean, keep the beach clean.” He used a siren and megaphone to get the attention of the beach and told them: “We love the fact you come to our beach but please don’t leave your rubbish because it was in a disgusting state last night. We urge you to keep the beach clean.”

The council said refuse crews suffered abuse and intimidation as they attempted to empty overflowing bins on the seafront. Security was put in place to protect them as they collected more than 40 tonnes of rubbish.

Extra police patrols were put on. Sam de Reya, Dorset police assistant chief constable, said: “These are unprecedented times and we are urging people to stay away from the area of Bournemouth beach and other Dorset beaches.

“The declaration of a major incident allows us to bring agencies together so we can take actions available to us to safeguard the public as much as possible.

“We are also reliant on people taking personal responsibility and strongly advise members of the public to think twice before heading to the area. Clearly we are still in a public health crisis and such a significant volume of people heading to one area places a further strain on emergency services resources.”

Ellwood said it was a pity the government’s daily Covid-19 briefings had been halted as these could be a way of getting out quick, clear messages when issues like this crop up. He also said warning signs should be set up on the main roads and railway stations to warn people that the resort was already full.

He said: “Bournemouth is deluged with visitors and the local authority cannot cope. We have the perfect storm of incredible weather and a liberation of some Covid-19 guidelines and given the wider consequences of a second spike, the government needs to offer assistance and respond to this dangerous event.

“When you have mass demonstrations in London the Metropolitan police can call on other forces to help and I think this is what needs to happen here. The police locally are overwhelmed, they cannot be everywhere.”

Stephen Allen, a resident of Sandbanks, said: “It is the illegal camping that gets us. You see people coming out of their tents in their pyjamas and head off into the sand tunes with toilet roll. It is very unpleasant.

“There has been illegal parking happening all over the place. Cars have parked on cycle lanes, double yellow lines and on the pavements. They would happily take a £35 parking fine rather than queue for hours on end.”

Along the Dorset coast at Lulworth, Cllr Laura Miller told of the abuse she received when she tried to turn people away. She said: “I have been shouted and sworn at and one guy spat at me.

“These are people who have travelled three or four hours in their car, they are hot and grumpy and then they are turned away. Some drivers have ignored our barriers and just knocked them over and driven through.”

Merseyside police said five people were arrested for various offences including drunk and disorderly behaviour and possession of drugs, and a speaker and music equipment were seized.

Police remained at Formby beach, as well as Ainsdale and Crosby beaches, parks and beauty spots including Formby nature reserve, on foot, in vehicles and on quad bikes.

Ch Insp Andy Rankine said: “While we want everyone to enjoy themselves, antisocial behaviour and criminality will not be tolerated and Merseyside police will take action where necessary.”

The local authority and police in Southend-on-Sea, Essex, continued to monitor the numbers at its beach.

Cllr Ian Gilbert, leader of the borough council, said: “We are aware of the situation in Bournemouth. Although we are very busy and have our own challenges to deal with including antisocial behaviour and littering, we are not currently at a stage where we need to announce a major incident. However, we are keeping everything under constant review, and liaising regularly with our partners in emergency services.”