The coronavirus crisis is having a huge impact on young people with existing mental health conditions, a survey has found. The loss of routine, school closures and exam cancellations are all factors, as well as health concerns.

For teenagers on the verge of independence, losing their freedom can be hard. Ligia and her family have been self-isolating since 18 March, because her mother is heavily pregnant. As someone who was always out, seeing friends and working, she has found it challenging to be stuck in a flat with four people.

"Since going into isolation my anxiety has really increased," Ligia says. "It often comes really unexpectedly. I have trouble breathing and thinking straight. It's just a sense of all-over-the-place-ness."

The biggest blow was the government's cancellation of the A-levels she had been revising for.

"It was really tough to hear. I cried. It had a big impact on me," she says. "It was like I had been preparing to run the marathon and I was at the start line and they were counting down, 3, 2, 1 - and then they tell you they're not going to run the race."

School has been part of Ligia's life for as long as she can remember, so being unable to "close that chapter properly" is very hard, she says.

"I can't distract myself by going out. I spend my days doing revision."

It's hard to be motivated when this revision may never be tested, but Ligia has found ways of improving her mental health.

"I make my bed in the morning so I won't get back into it. I try to regulate my breathing and listen to a lot of deep relaxation music," she says.
"Meanwhile I'm keeping busy by learning about witchcraft online - teaching myself something gives me that feeling of: 'Yes, I can do this alone.'" 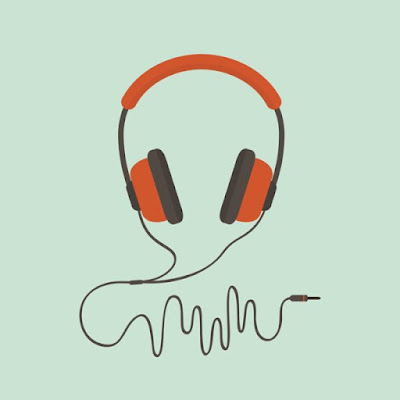 Naomi, 21, a final-year psychology student from Cardiff, says her anxiety has increased hugely due to the coronavirus. Her finals were cancelled, and although the lectures and exams have moved online, the loss of routine and uncertainty around grading have affected her.

The things she used to do to manage her anxiety, such as volunteering, and following a strict routine that got her out of the house, are no longer an option. So she has had to develop new coping strategies.

Naomi finds that keeping a journal helps, using prompts like: What's making me feel this way? What am I grateful for today? "Those questions point me to think about what I have done during the day and what's been positive, and also write about the things that I'm worrying about," she says.

Another positive is the strong sense of community that the coronavirus crisis has created. "We're all in this together and it is quite nice to know that there's people out there who understand those worries," she says. At the same time, she's concerned that people like her, with longstanding mental health problems, might be forgotten.

A survey by YoungMinds has shown that the coronavirus pandemic is having a profound effect on young people with existing mental health conditions. Although they understood the need for the measures taken in response to the virus, the report says, this did not lessen the impact. Many of those who took part in the survey reported increased anxiety, problems with sleep, panic attacks or more frequent urges to self-harm.

Professionals who work in the young people's mental health sector are continuing to provide support where they can, the charity reports. "They are going to remarkable lengths to reach young people, even though face-to-face contact is now usually restricted and remote support is often challenging," says Emma Thomas, Chief Executive of YoungMinds.

"While we recognise the huge efforts being made, we need to find ways to help those young people who have lost their support - not least because, in many cases, they have also lost many of their coping mechanisms, including contact with friends or routines that help them to manage their conditions. We also know that many young people who previously might not have needed mental health support are likely to do so in future." 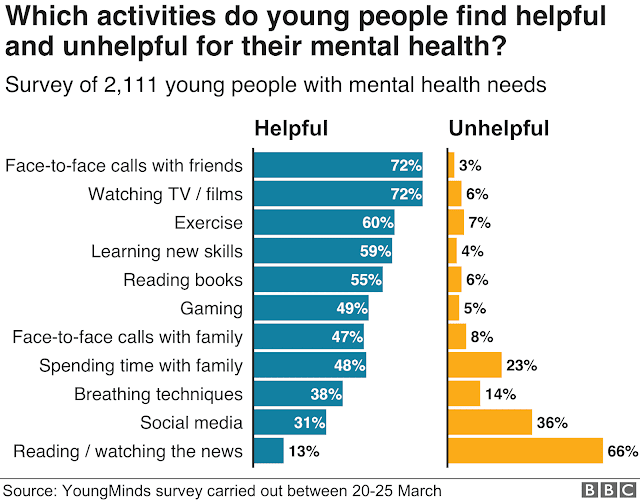 Another organisation that has noticed changes as a result of coronavirus is Shout, a free 24-hour texting service for people in crisis. Over the past week, they have experienced a steady increase in the number of people contacting them, peaking at more than 1,000 conversations on Sunday.

Amy says people in crisis can find it hard to even pick up the phone, so texting can be easier. In her conversations, she aims to de-escalate the crisis and decide on next steps. Many texters are struggling with the loss of routine, so she has been helping them find new ones.

"Without a routine, I know that a lot of bad habits and bad thoughts can come in," says Amy, who has experienced mental health problems herself.

One texter was distraught because since the West End shut down they could no longer meet up with friends to see a show. The plan they came up with was to make a scrapbook with all their tickets and write down their memories. 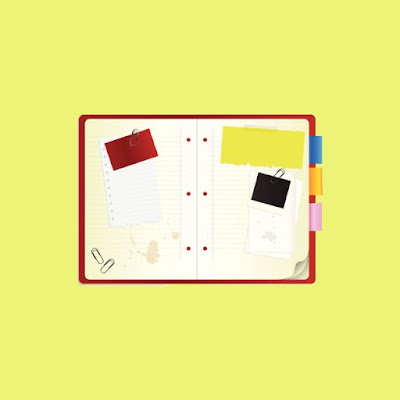 Since the shutdown, John 18, from North London, has found it harder to distract himself from his depression. His family have been self-isolating since 15 March, after his mother, who works in a school, fell ill with suspected Covid-19.

Being forced to stay indoors has had a negative impact on John's mental health.

"Normally, if I was feeling really bad, I would go on a bus ride and be able to just clear my thoughts for a bit," he says.

"I would pick a bus number and take the route fully. But I can't really do that now. I'm stuck in my mental cycles and I've been feeling especially low. I'm not able to come out of it as easily." 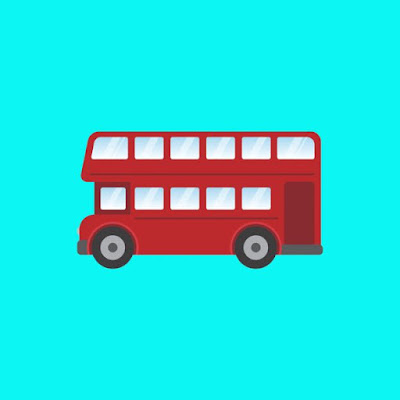 John missed a term-and-a-half of school due to a serious depressive episode, and had already decided to repeat Year 13.

The closure of his school has actually helped him because all their educational resources are now available online - and he prefers this method of learning to the classroom.

However, he has not yet been able to meet his new adult counsellor because of the lockdown, and that worries him. "I don't want to feel worse," he says.

Even though he's "pretty nocturnal" he tries to get out of his bedroom as much as possible so he can sleep better.

"If you're constantly thinking and being busy in your bedroom, when you eventually want to go to sleep, you're going to be stuck with those thoughts. Try and go into the living room or garden if you can. I feel that helps me."

Thirteen-year-old Chloe was up until midnight tidying her bedroom earlier this week, just to keep busy.

"Once she starts something she gets quite obsessive about it," says her mother, Julie Cambridge. The family have taken great care to self-isolate because Julie is a carer for her adult daughter and grandchildren, who live a few doors away on their Brixton estate and she cannot risk getting ill.

Chloe, her youngest daughter, has ADHD and anxiety, and since the schools closed she has been "climbing the walls", says Julie. She's very sporty and sociable and would usually be out running or mixing with friends.

"Now I feel bored and lazy," says Chloe. "I want to go outside because I feel claustrophobic."

She listens to music, stays in touch with friends on social media and does her school work via Google classroom. But her anxiety has got worse, and she's been moody. "I can get aggravated easily, and I'll probably give you attitude," she says.

By contrast, Julie's 16-year-old daughter, Jade, has never been one for going out. "Since primary school, she's just come home and done homework every day," Julie says.

But Jade was "knocked for six" when her GCSEs were cancelled. "I was gutted, honestly, I was very stressed," says Jade. "I've put a lot of effort into these exams, prepared myself really well. Now we're not even getting the opportunity." 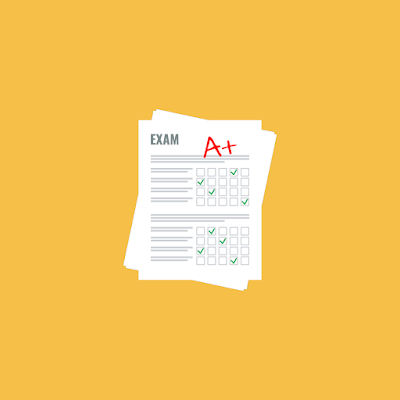 She's still studying but admits that she's lost a lot of motivation, and that it has affected her mental health. "I'm quite stressed about everything. It's affecting my mood, definitely. I'll become very down and distant from everyone."

Jade wants to go to university to do biomedical science. Her predicted grades are good, but she was looking forward to doing even better; studies have shown that university applicants from low-income backgrounds are significantly more likely to have their grades under-predicted than those from high-income backgrounds.

"Everybody has low expectations of the children from this area. It isn't the norm for someone to achieve and make something of themselves," says Julie, who wonders how all this will affect Jade in future.

"I'm worried they will be known as the 'Covid generation', the ones who didn't do their exams - will people look at them differently because they didn't sit down and do that test?

"It's the sense of achievement that they're missing out on."

Exams and graduations are rituals and milestones that are important in a young person's development, says Hanspeter Dorner, a Consultant Child & Adolescent Psychiatrist in East London. "Missing out on these milestones can have an adverse impact, but perhaps you can recreate these rituals at a later date."

Naomi and her fellow university students are doing exactly that - they are still planning on holding the Psychology Ball at a future date.

"We can schedule it at the same time of our actual graduation so that we still get to have those celebrations," she says. "They're a way of marking the closure of something, and it's really important that we still get the opportunity to do that."

Top tips for looking after your mental wellbeing while at home
Be safe and stay connected - Self-isolation doesn't mean cutting off all communication, in fact, it's more important than ever to talk and listen, share stories and advice, and stay in touch with the people who matter to you.

Take notice of things that make you feel good - Eating healthy food, keeping moving by going out for walks or exercising can help us to feel good. Notice the beauty outside your window or on a walk around the block, taking time to acknowledge people you see.

Go on an information mini-break - the endless updates from news outlets and people on social media can be completely overwhelming. Pick one trusted source of information and visit it once a day only.

Share how you're feeling - Talk to loved ones and friends. Talking has the effect of lifting our mood and really helps us to begin to feel more positive if we're having a tough time.

Keep moving - Find ways to move your body and your mood every day. It's OK to go for a walk, run or ride your bike, as long as you avoid other people.

Stick to a routine - This sounds dull but it will help you get through each day. Go to sleep and wake up at the same time, eat regularly, shower, change your clothes, get some fresh air, book in video-chats with colleagues or friends, do your chores. Make time for fun!

Find ways to relax and distract - Finding things that help you breathe deeply, consciously setting your worries aside or focusing on the moment to recharge can be helpful. Distracting yourself by watching films or TV programmes, reading or listening to music will help you to set things in context and provide relief from anxious feelings.
Source: Sarah Kendrick, psychotherapist for Shout