A brief history of word games

When I began to research the history of crosswords for my recent book on the subject, I was sort of shocked to discover that they weren’t invented until 1913. The puzzle seemed so deeply ingrained in our lives that I figured it must have been around for centuries—I envisioned the empress Livia in the famous garden room in her villa, serenely filling in her cruciverborum each morning­­. But in reality, the crossword is a recent invention, born out of desperation. Editor Arthur Wynne at the New York World needed something to fill space in the Christmas edition of his paper’s FUN supplement, so he took advantage of new technology that could print blank grids cheaply and created a diamond-shaped set of boxes, with clues to fill in the blanks, smack in the center of FUN. Nearly overnight, the “Word-Cross Puzzle” went from a space-filling ploy to the most popular feature of the page.
Still, the crossword didn’t arise from nowhere. Ever since we’ve had language, we’ve played games with words. Crosswords are the Punnett square of two long-standing strands of word puzzles: word squares, which demand visual logic to understand the puzzle but aren’t necessarily using deliberate deception; and riddles, which use wordplay to misdirect the solver but don’t necessarily have any kind of graphic component to work through.

WORD SQUARES
The direct precursor of the crossword grid is the word square, a special kind of acrostic puzzle in which the same words can be read across and down. The number of letters in the square is called its “order.” While 2-squares and 3-squares are easy to create, in English, by the time you reach order 6, you’re very likely to get stuck. An order 10 square is a holy grail for the logologists, that is, the wordplay experts.

The ancient Romans loved word puzzles, beginning with their city’s name: the inverse of ROMA, to the delight of all Latin lovers, is AMOR. The first known word square, the so-called Sator Square, was found in the ruins of Pompeii. The Sator Square (or the Rotas Square, depending on which way you read it; word order doesn’t matter in Latin) is a five-by-five, five-word Latin palindrome: SATOR AREPO TENET OPERA ROTAS (“the farmer Arepo works a plow”).

The Sator Square is the “Kilroy Was Here” of the Roman Empire, scrawled from Rome to Corinium (in modern England) to Dura-Europos (in modern Syria). It’s unclear why this meme was such a thing. “Arepo” is a hapax legomenon, meaning that the Sator Square is the only place it shows up in the entire corpus of Latin literature—the best working theory is that it’s a proper name invented to make the square work.
But the Sator Square has more tricks up its sleeve. If you reshuffle the letters around a central n, you can make a Greek cross that reads PATERNOSTER (“our father”) in both directions. Four leftover letters—two a’s and two o’s—stand for alpha and omega. Early Christians might have used the square as a discreet way to signal their presence to one another. 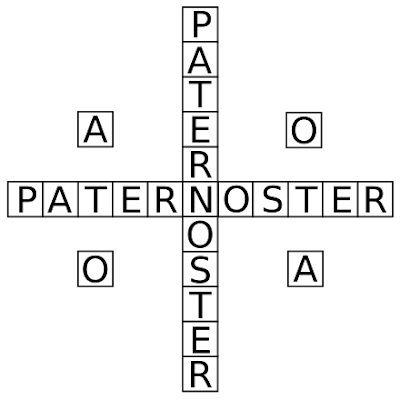 Through the Middle Ages and beyond, the Sator Square persisted as a magical object, gaining a reputation as a talisman against fire, theft, and illness. The devil, apparently, gets confused by palindromes, not knowing which way to read, so a five-by-five two-dimensional palindrome is an extra-powerful snare. The square appears etched on tablets as prevention against mad dogs, a snakebite cure, and a charm to protect cattle from witchcraft.

While word squares maintained their quasimagical reputation for hundreds of years, other visual word games became popular during the nineteenth century. The Victorian era saw a boomlet of visual word games, such as double acrostics, that paved the way pretty directly for the crossword. Queen Victoria, an ur-cruciverbalist, constructed the “Windsor Enigma” to teach her subjects how to bring coals to Newcastle:

Oxford mathematician Charles Dodgson, better known by his pseudonym Lewis Carroll, invented a game called doublets, in which you transform one word into another of equal length, changing a single letter at a time, using as few moves as possible; all the linking steps also have to be legitimate words. As in a crossword, the process of moving stepwise from letter to letter forces you to think about all the possible word combinations. And each doublet has a theme, a kind of mini-alchemy: Drive PIG into STY. Raise FOUR to FIVE. Make WHEAT into BREAD.

But the particular magic of the crossword came when riddles entered the grid.

RIDDLES
Crossword clues trace their origins to riddles, ancient and ubiquitous little games that run the gamut from divine spells to dick jokes. The Exeter Book, an eleventh-century Old English manuscript, has about a hundred riddles of all types: a sweet ditty about a bookworm, barely veiled double entendres about swords in scabbards and bread rising in ovens, and solemn liturgical hymns. There are “about” a hundred because these riddles are still maddening their readers. In the ten centuries since their composition, scholars haven’t conclusively solved every one, which also means that some of the things that get treated as separate puzzles might actually be one giant long riddle, or what we think is a long clue might have two or three answers. Riddle snark is a cottage industry among medievalists, who love to argue about solutions to the riddles, mostly by means of long, ostentatiously thorough academic articles. There ain’t no scholarly rap battle like a multigenerational face-off over whether Riddle 86’s answer is an “organ” or a “one-eyed seller of garlic.”

There are four basic ways that riddle logic operates: true riddles, wordplay, neck riddles, and anti-riddles. The enigma, a metaphorical statement that’s designed to feel like it has one solution but actually contains unresolvable multitudes, is different. Think of koans, like What is the sound of one hand clapping?, or meditative statements like 1 Corinthans 13:12: “For now we see through a glass, darkly.” These are logic knots that want to stay knotted, or (k)not solved.
Riddles, on the other hand, do want to be solved.

Little Nancy Etticoat
In a white petticoat
And a red nose;
The longer she stands,
The shorter she grows.

The answer? A candle: the “white petticoat” is the wax, the “red nose” the flame, and of course the longer you leave a candle standing, the shorter it’s going to become. True riddles rely on a logical connection that’s not obvious on the surface, so you have to twist your brain to get it. They’ve been around for millennia, and the best have been repeated for that long. Take, for example, “What has six legs but walks on four feet?” (Answer: a horse and rider.) Or the Sphinx’s riddle: “What walks on four legs in the morning, two in the afternoon, and three in the evening?” (A human: crawling as a baby, standing upright as an adult, and using a cane when old.)

When riddles become baked into culture, they can turn into in-jokes. Consider an egg. Egg’s a great solution for lots of images: a house without doors or windows; a house that cannot be reentered; begets parent; and more. In fact, one egg riddle has become synonymous with the whole genre of riddling itself: Humpty-Dumpty—or, if you prefer, his counterparts: Boule Boule (France), or Tille Lille (Sweden), or Wirgele-Wargele (Germany), or Hümpelken-Pümpelken (also Germany)—was originally printed as a riddle with the answer “egg.” The true riddle can thus become a meta-riddle.

WORDPLAY RIDDLES
A wordplay riddle does the same thing as a true riddle, but adds an extra layer of trickiness (A—>∀—>B). Wordplay riddles include puns and other bits of linguistic gymnastics to take the anticipated answer to the next step. A rebus, for example, uses letters as part of the clue. One simple French rebus riddle uses just two letters—G and a—to be read as J’ai grand appetit (“G grand, a petit”). A syllable riddle acts as a game of charades, connecting seemingly disparate parts, as in this eighteenth-century example:

My first is expressive of no disrespect,
But I never call you by it when you are by;
If my second you still are resolved to reject,
As dead as my whole, I shall presently lie.
The answer: “herring” (her + ring).

NECK RIDDLES
A neck riddle gives a solution that would be impossible for the solver to arrive at without context (?—>B). The term “neck riddle” comes from stories in which the hero uses an unsolvable riddle to outwit a judge and save himself from being hanged: a neck riddle saves your neck. One typical folktale example:

As I walked out and in again
From the dead the living came.
Six there is and seven there’ll be,
So tell me this riddle or set me free.

The answer is a horse’s skull that contains a bird hatching eggs; six have hatched but one is still to come. A neck riddle has an answer that’s so specific it’s deeply unsatisfying, because that’s precisely the point: after all, it’s not actually a solvable, it’s got to be such a stumper that you get off scot-free. Often that’s achieved through overprecision, but sometimes a change in perspective will do the trick. In The Hobbit, our hero Bilbo Baggins bests Gollum in a riddle contest by asking him the unknowable “what’s in my pocket?”

ANTI-RIDDLES
An anti-riddle is one that tricks the reader by looking like a riddle but not actually being one at all (A—>A). “Why did the chicken cross the road?” smells like a riddle, but the answer, “To get to the other side,” is just the literal answer. “What’s black and white and red/read all over?” might not be “a newspaper” but rather “a zebra with blood on it,” defying the anticipated pun with the unexpectedly ultraliteral.

If you’re a piece of artificial intelligence software, you might have a hard time solving a crossword. You’d have to separate the puzzle into two separate strands of problems to tackle the issue: how to figure out what a clue is saying (or, rather, what it’s precisely not saying); and how to fill the letters in the grid in the way that makes the most sense. Crosswords force the brain to cross wires and solve both these problems at once, balancing the visual-spatial part of the brain with the logic-pun part of the brain. This is part of the reason why even the best crossword-solving AI in the world isn’t yet better than the best human: the AI can fill in the grid pretty quickly, but in terms of resolving that grid through riddle logic, humans are still a step ahead. The most innovative aspect of the crossword is that, through braiding together tasks the mind already wanted to do, it created an itch we didn’t know we had. And yet we’ve always been primed to solve them.