Pratap NM has been invited to over 87 countries to showcase his drones and has worked in over six major projects, including one for defence purposes.

Innovation in today’s world has come to the rescue in many cases, be it during natural disasters, for border security or even helping farmers in agriculture. Drone technology is one such innovation that has emerged as one of the most valued and essential technologies in recent years.

During the floods that devastated North Karnataka recently, when thousands of people were stranded, 22-year-old Pratap NM used his indigenous drones to provide food and other relief material to the affected areas. A BSc graduate from JSS College of Arts, Science and Commerce in Mysuru, Pratap is often lauded as the Drone Scientist.

Pratap started tinkering with drones when he was only 14 years old, and two years later at 16, he had managed to develop a fully functioning drone. Even though it could fly and capture only a few images, it was no less than an achievement for the young boy, who was inspired by the might of the eagle soaring in the sky and Dr APJ Abdul Kalam, India’s top scientist and former president.

Over the course of the next few years, Pratap built 600 drones all by himself. He has so far completed six major projects that includes Telegraphy in Border Security, Drones in Traffic Management, UAVs in rescuing humans and Auto piloted drones and Cryptography in Drone Networking. Pratap’s drones are saving the lives of tribals in Africa by helping deliver medical support in a short period of time. 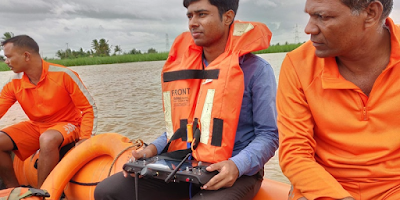 Pratap has also been invited to over 87 countries to showcase his different kinds of drones. According to Deccan Herald, Pratap has been the recipient of the Albert Einstein Innovation Gold Medal in the International Drone Expo 2018 held in Hanover in Germany, another gold medal in the International Drone expo in Germany and many others. He was recently invited by IIT Bombay to deliver a lecture on drone applications in emergency situations.

Speaking to Edex Live about his skills, he said, “I use very little money and a lot of e-waste to make my drones. Whenever I win competitions, I am awarded money which I save for the future. And as far as e-waste goes, a lot of it is generated and I get it from electrical shops in Mysuru, Visakhapatnam, Mumbai and a few other cities. For example, if there is a mixer-grinder that is defunct, I can remove the motor and use it in my drone. Similarly, I make use of chips and resistors from broken televisions to build my drones. It doesn't matter what the prototype looks like. Proving the technical points of the drone is all that matters.”