There are chances of scattered rain in the country during the coming weekend, followed a spell of cold weather and strong winds, the Qatar Met department has said.

The minimum temperature may drop below 10C in the southern parts of Qatar during the cold spell, according to a report issued by the department Tuesday.

The weather office has said a state of atmospheric instability is expected to affect the country from Thursday until Saturday due to the extension of a low-pressure system over the region.

The cloud cover is expected to increase gradually and there is a chance of scattered rain of variable intensity, which may become thundery at times in some areas, the report states. 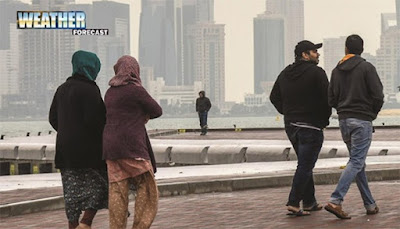 Fresh to strong northwesterly winds are likely to begin blowing from Friday, with the wind speed exceeding 35kt offshore that will cause the wave height to exceed 10ft.

"Therefore, kindly avoid going to sea due to the unsettled weather conditions from Thursday, with the marine warnings continuing until Tuesday (January 14)," the Met department advised.

In addition, cold weather conditions are expected to accompany northerly winds, especially at night and early in the morning, with a noticeable drop in temperature, the report points out, adding that the minimum temperature is likely to drop below 10C in some southern areas for the first time this season.

The Met department has urged people to follow latest updates through its official social media accounts.

Meanwhile, Wednesday's forecast says it will be misty in some place in the early hours, followed by moderate temperature during the day and some clouds. It will be cold by night.

The minimum temperature Wednesday is expected to be 13C in Wakrah and Mesaieed, 14C in Al Khor and Abu Samra, 16C in Doha, 17C in Dukhan and 18C in Ruwais.

On Tuesday, a minimum temperature of 11C was recorded in Turayna, followed by 12C in Mesaieed, 13C in Batna and Karana, 14C in Al Khor, Ghuwairiyah and Jumailiyah, 15C in Wakrah, Sheehaniya and Abu Samra, and 16C in Doha (airport area), Hamad International Airport area, Qatar University area and Mesaimeer.