Boris Johnson has said "we will not lament" the death of Iranian general Qasem Soleimani, describing him as "a threat to all our interests".

But the prime minister called for "de-escalation from all sides" following the killing in a US airstrike in Iraq on Friday.

And in a separate joint statement, Mr Johnson and his French and German counterparts urged restraint. 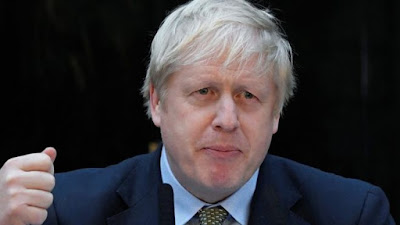 "The current cycle of violence in Iraq must be stopped," the joint statement, released late on Sunday night, said.

With tensions rising in the region following the drone strike ordered by US President Donald Trump, Iran has responded by vowing revenge and announcing it will no longer abide by the restrictions in its 2015 nuclear deal.

In the statement, the three leaders urged the country to "reverse all measures inconsistent with" the deal.

Meanwhile, Mr Johnson is preparing to assemble key ministers to discuss the spiralling crisis in the Middle East.

The prime minister said he spoke with Mr Trump on Sunday about the assassination of the Iranian general, who spearheaded the country's military operations in the Middle East as head of the elite Quds Force.

Earlier on Sunday, in his first public statement since Soleimani's death, Mr Johnson said the 62-year-old had been "responsible for a pattern of disruptive, destabilising behaviour in the region".

"Given the leading role he has played in actions that have led to the deaths of thousands of innocent civilians and western personnel, we will not lament his death," Mr Johnson said.

"It is clear, however, that all calls for retaliation or reprisals will simply lead to more violence in the region and they are in no one's interest."

Mr Johnson said the UK was in "close contact" with all sides to encourage de-escalation and said Parliament will be updated when it returns on Tuesday.

Iraqi MPs have responded to the drone strike by passing a non-binding resolution calling for an end to the foreign military presence.

Caretaker Prime Minister Adel Abdul Mahdi spoke in favour of US and other foreign forces leaving, although most Sunni and Kurdish MPs boycotted the vote.

'Shared threat'
About 400 British troops are stationed in Iraq, while the US has 5,200.

A UK government spokesman said that coalition forces were in Iraq to protect its people and others from the Islamic State group.

"We urge the Iraqi government to ensure the coalition is able to continue our vital work countering this shared threat," he said.

Meanwhile, HMS Montrose and HMS Defender are to start accompanying UK-flagged ships through the Strait of Hormuz in the Gulf, where a tanker was seized by Iran last July.
Foreign Secretary Dominic Raab, who told the BBC's Andrew Marr show that he learned of the US attack on Soleimani "as it happened", spoke to the Iraqi prime minister on Sunday morning.

Mr Raab defended the killing because of the US's "right to self-defence" against Soleimani's use of militia's to destabilise the region and attack Western forces.

He also defended Mr Johnson for being on holiday as the crisis unfolded, saying that he had been "in constant contact with the prime minister over the Christmas break on a whole range of foreign policy issues".

Shadow justice secretary Richard Burgon, who is standing to be Labour deputy leader, said Mr Johnson's response was "pathetic", adding that he should stand up to a US president "recklessly threatening to launch a war".