The author of Grit: The Power of Passion and Perseverance, Angela Duckworth is an example of the kind of character she seeks to foster in the next generation. As the founder and CEO of the Character Lab, a nonprofit dedicated to children's character development, as a professor of psychology at the University of Pennsylvania, and as a mom, Duckworth is trying to teach parents to let their kids struggle and that success is a long game.

According to Duckworth, grit is "this combination of passion and perseverance over really long periods. So it's loving what you do and working really hard at it for a very long time."

During the latest episode of The Motherly Podcast, Sponsored by Prudential, Duckworth tells Motherly co-founder Liz Tenety, "One could argue that motherhood requires more grit than anything else because it is such a stamina sport and the grind doesn't always feel like it's working." 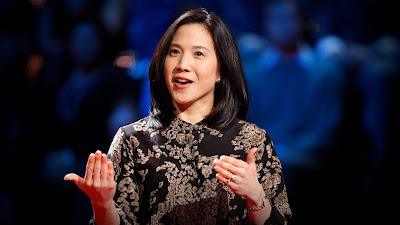 As Duckworth explains, mothers can model grit every day by persevering in the face of challenging parenting moments, but we can also instill grit in our children, even very young kids, by encouraging them not to give up. It is so easy to tie a child's shoes for them when we're running late, but if we take a moment to stop and let them work through that challenge on their own we are being gritty and encouraging it.

"You let them struggle and you don't solve their problems for them too early," Duckworth tells Tenety, recalling a time when one of her daughters was struggling to open a box of raisins. "When she gave up and like walked away thinking that's too hard, I did worry about her long-term grit. I was like, oh my gosh my daughter's been defeated by a box of SunMaid raisins.
But the important thing is that when you see your child struggle, let them struggle a little longer than maybe is comfortable for some of us."

By not rushing to open the box of raisins for her daughter, Duckworth taught her an important lesson in perseverance: If you want something you have to keep working at it yourself because you can't assume people will do things for you. This can be hard for parents because we often want to rush in and fix things for our kids, but Duckworth suggests we force ourselves to wait a beat and give our kids a chance before coming to the rescue.

"If you solve their problems guess what? They will not figure out how to solve their own problems if you make life a frictionless path. Then don't be surprised when they are not very resilient," she explains.

When we don't do everything for our kids they learn that they are capable, and we're cultivating a growth mindset. When we let our kids struggle and persevere, we're teaching them that the ability to get back up and overcome challenges is more important than talent—we're teaching them grit.

(Source: Motherly)
Posted by Arjunpuri at 03:30