The African American who moved to Ghana 'to escape US racism'

Having vowed to quit the US after being the victim of what he believed was a racially motivated arrest by police officers, African American Obadele Kambon relocated to Ghana in 2008 - and has never looked back.

Mr Kambon has now built a successful life in the place that was once at the heart of the slave trade, and enjoys the freedom which, he says, was denied to him in the US, his birthplace.

He says he no longer looks over his shoulder, worrying that police will pull him over or, worse still, kill his son. This was the fate that befell 12-year-old Tamir Rice who was shot dead in a park in Cleveland, Ohio, in 2014 while playing with a pellet gun that police said they thought was real.

Mr Kambon says the turning point in his life came in 2007. He was arrested and put on trial in Chicago - where he lived - after being accused by police officers of having a loaded firearm under his car seat and intending to commit a drive-by shooting. In fact, he had an unloaded licensed gun, used earlier to secure a campsite, in his car boot.

Mr Kambon recalls that he was shocked by the charges and as he sat in the court, he vowed: "Never again will I allow myself to be in a jurisdiction where corrupt white police officers and a judge will take me away from my family, wife and kids just on a whim."

Mr Kambon - who was a young academic teaching at schools and universities in the Chicago area - was eventually cleared of the charge. He then saved up about $30,000 (£24,000) and relocated to Ghana's capital, Accra, the following year.

He was joined by his wife Kala, and the couple now have three children - Ama, Kwaku and Akosua.

Immersed in African spirituality
Mr Kambon started his doctoral studies in linguistics at the University of Ghana in 2009 and now teaches at its Institute of African Studies.

Since moving to Ghana, he has noticed that he no longer feels he is a victim of racial profiling or racial abuse.

He points out that his friend felt likewise when he relocated, and quipped: "Wow, this is what it must feel like to be a white person in America, just to be able to live without worrying that something is going to happen to you." 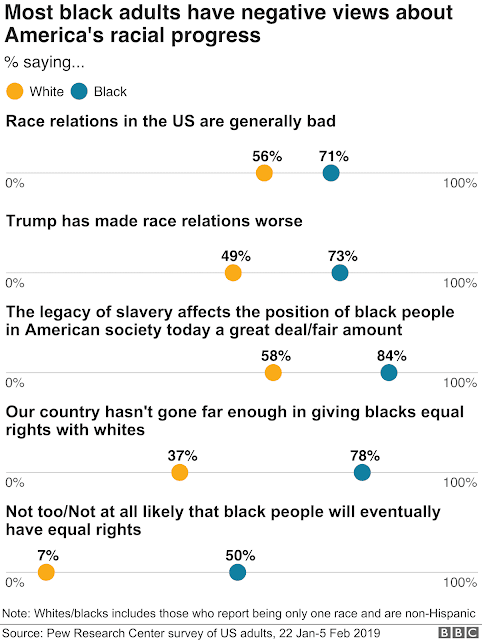 Mr Kambon concedes that not everything is "hunky dory" in Ghana.

"You practise African spirituality and everyone thinks you are a Rasta, the Abraham religion that the whites introduced is dominant and there is not even a concept that Africans can have their own religion," he says.

He was also shocked to discover that in a complex where he lived with four other families children did not speak any African language.

"There was a point where the children had an Ewe mother and if you greet them in Ewe they'll tell you, 'Oh I don't speak Twi'.

"They cannot even identify their own mother language," he adds.

In contrast, Mr Kambon is fluent in two West African languages - Akan and Yoruba - and is proficient in a third, Wolof. He also has some level of competency in Swahili, East Africa's main language, and in Kikongo, spoken in parts of southern and central Africa.

Campaigned against Gandhi
He has also tried to address the legacy of colonialism in other ways.

In 2018, he successfully led a campaign to force the University of Ghana to remove a statue of India's independence leader Mahatma Gandhi.

Standing at the empty plinth, he gave the Black Power salute, and called for the recognition of African heroes rather than a man who had once referred to black South Africans by a highly offensive racist slur - and had said that Indians were "infinitely superior" to black people.

"If we show that we have no respect for ourselves and look down on our own heroes and praise others who had no respect for us, then there is an issue," Mr Kambon tells the BBC.

Although slavery was practised long before 1619, this year is widely regarded as the 400th anniversary of the first enslaved Africans arriving in the US.

The Elmina and Cape Coast slave castles along Ghana's coastline served as a major hub for the trans-Atlantic trade where millions were captured and loaded onto ships, never to return home.

Ghana's President Nana Akufo-Addo has declared 2019 to be the "Year of Return", saying it is the country's responsibility to "welcome home" Africans whose families were forced into slavery.

The Ghana Tourism Authority has also planned a series of events - including a festival on 24 August - to showcase the beauty of the West African state in the hope of boosting tourism.

Mr Kambon welcomes the initiative, but warns that Africans in the diaspora should not merely be seen as "automated teller machines".

Bastion of pan-Africanism
The president sees things differently, saying it is an opportunity to strengthen links and to give the diaspora a chance to explore the possibility of settling in Ghana - something that civil rights leaders Marcus Garvey and WEB Du Bois championed in the 1920s.

Ghana has long prided itself as a bastion of pan-Africanism. Its founding leader, Kwame Nkrumah, declared the West African state the "Black Mecca", and showed strong support for Marcus Garvey's Back-to-Africa movement in the 1960s.

Various governments have continued in this tradition - for instance in 2001 then-President John Kufuor's government passed the Right of Abode Law, allowing Africans in the diaspora to settle in Ghana.

In 2016, Mr Kambon - along with 33 other Africans in the diaspora - petitioned President John Mahama, to grant them citizenship.

In what was his last act in office after losing elections in December of the same year, Mr Mahama used his presidential powers to accede to their request.

"'I am not giving you anything, this is your birth right, I am only restoring what is rightfully yours,'" Mr Kambon recalls Mr Mahama telling him.

As for his parents, he is grateful to them for connecting him to his African roots by naming him Obadele, Yoruba for "the king comes home".

To crown it all a chiefdom in Ghana's Eastern region honoured him in 2017 with the title "Ban mu Kyidomhene", an Akan phrase for "Ruler of the Rear-guard".

Mr Kambon has pledged to continue campaigning for people in the diaspora to relocate to the continent to help in its development - a message which he hopes will resonate at a time when US President Donald Trump is accused of fuelling racism and xenophobia.

"What he does is actually helpful to those of us who are for repatriation," Mr Kambon says.

Timeline of slavery in the US:
1619 - Some of the first African slaves are purchased in Virginia by English colonists, though slaves had been used by European colonists long before

1788 - The US constitution is ratified; under it, slaves are considered by law to be three-fifths of a person

1865 - The South loses the war; the 13th Amendment to the Constitution formally abolishes slavery