As PhD season beckons graduate students, this novel is a graphic reminder of the hell of academia

Tiphaine Rivière’s ‘Notes On A Thesis’, translated from the French by Francesca Barrie, is a reminder of all that can go wrong, and probably will.

The post-graduate admission season is upon many college graduates once again, as millions of hopefuls across the world – and India – wait with bated breath for their acceptance letters to PhD programmes and graduate school, while others get ready to embark on their research stints. For students looking for a sneak preview of what might – and the operative word is “might” – lie in store, there is no better time to pick up Tiphaine Rivière’s 2016 graphic novel, Notes On a Thesis, a no-holds-barred case study of the modern PhD student’s journey.

It tells the story of 20-something Jeanne Dargan, the embodiment of impostor syndrome –a persistent mental roadblock for some students which causes them to disbelieve or downplay their achievements. The text opens with an incredibly insightful scene of the schoolteacher’s reaction to a professor’s response to her PhD thesis proposal. “Fed up” of her unrewarding job, she is over the moon when he offers to be her academic supervisor. After celebrating for all of about 30 seconds, she asks her partner if he minds “checking the email” in case “someone’s pranking [her]”. He confirms the news, and the celebrations continue. 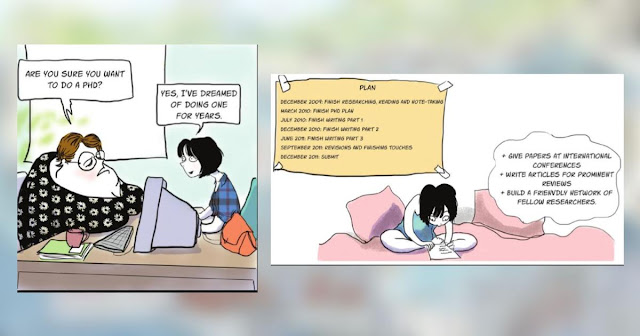 ‘No dream job’
Jeanne’s reaction to the news is fascinating – her immediate instinct is to second-guess her achievement. This is just the first of Rivière’s many insights into the mind of the self-doubting, first-time academic. More broadly, her narrative is a humorous dissection of the idiosyncrasies, apathies, and double-standards that plague academia and its machinery.

Rivière’s text is a masterful exposé of the sad state of modern academia. She uses self-deprecating humour (the favourite of millennials everywhere) and piercing irony to expose its thankless and isolating nature. She also reveals the colossal gap between students’ expectations of entering academia, and its tiresome reality. For Jeanne, what started as a passion project quickly becomes the bane of her existence. This text, as if waving its arms and shaking the reader’s shoulders, screams that in reality, “a PhD is no dream job”.

While the graphic novel has been translated from French to English, the translator, Francesca Barrie, retains the sharp wit that is characteristic of French voices. Indeed, it is difficult to tell it is a translated work at all. At the same time, because this is a graphic novel, Barrie faces the challenge of fitting each translated rendering within the constraints of the pre-existing speech bubbles. Even so, Barrie delivers superbly, and the dialogue feels contemporary, and rolls off the tongue.

Indeed, Barrie does readers everywhere a favour with her translation; this is a work of fiction all college libraries will gain tremendous value from. Her translations perfectly complement Rivière’s visuals, which are rooted in iconic French landmarks.

A morbid refrain
Jeanne’s particular case of impostor syndrome is followed by an almost irrational urge to throw all her weight behind the project, perhaps inspired by the author’s real-life experience of writing her own PhD thesis in three years. Yet, the novel is so much more than an autobiographical chronicling of a thesis-writing journey. Rivière undercuts the text by illustrating the dangerous streak of manic perfectionism in young researchers today, which gives rise to deep anxiety and depression. She critiques this idea of the modern academic subject being programmed to robotically soldier on past each deadline, until they snap.

Jeanne’s “not a day more” spiel, right on cue at the end of almost each section, serves as a morbid refrain that bookends this obsession. Even though the text is a scathing critique of academia and its people, it is not only empathetic towards Jeanne, but also towards figures like professors and the people in charge of funding, for they have their own constraints. Similarly, it shows how professors lose sight of their priorities after achieving success in their field. 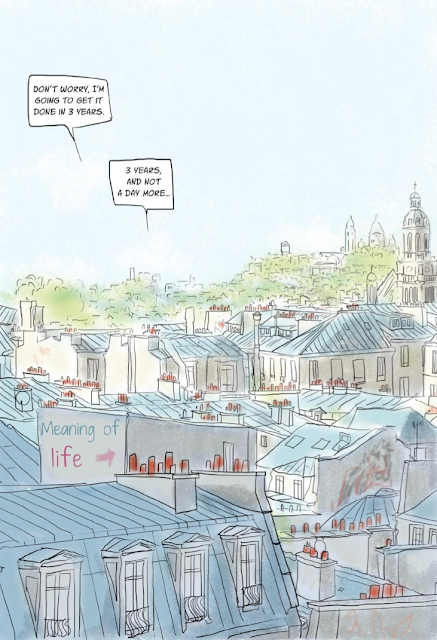 The novel comes to life with the rich visual detail Rivière injects into every page with composites of various forms, like Jeanne’s notes and schedules, screenshots of emails with professors, scans of student IDs, and of course, various types of bureaucratic paperwork littered throughout. The illustrations are made in an easy-breezy, cartoony style, and the characters’ expressions are punchy and larger-than-life.

The devil is really in the details with this novel. Each page is laid out uniquely and given a distinct visual style. The backgrounds allow the characters to pop, as they are often solid colours, or feature monochromatic, fuzzily drawn details. This creates visual depth in the panels and anchors the characters in the foreground. The drawings are simple, yet animate both the body and mind of each character, coasting the eye along the page.

As the narrative gets darker in theme and plot, the colour scheme follows, with the muted yellows being replaced with darker shades of blue in the second half. The striking visual metaphors capture Rivière’s unique understanding of the world of academia, and force the reader to stop and reflect. In fact, the amount of reflection Jeanne does almost lifts off and out of the page, forcing the reader to introspect as well.

Between the lines
Rivière’s linework and spacework push the form and elevate Notes On A Thesis above your average graphic novel. Traditional rectangular panels are dissected, switched out for circular ones, or sometimes ditched altogether. She also uses gutters in ingenuous ways for us to read between the lines.

The way Rivière uses space in this text heightens the reader’s understanding of Jeanne’s interiority. For example, the reader feels like they are sitting alongside Jeanne in a scene where she crouches in a corner with her thoughts. Both the reader and Jeanne become small as the room suddenly grows in size, now occupying the entire page.

Her final paper presentation is represented as a maniacal swimming session where she is literally whirling through words and gasping to come up for air. The author also takes us through each “hurdle” of the highly exclusive academic fortress that is the BNF, the national library of France, “a second home for all Parisian PhD students”. This is a microcosm of academia itself, and its illustration emphasises its exclusionary nature.

So intimidated is Jeanne by the students in her first lecture that they are represented as tigers. They transform into kittens in the following panel only after a student asks an intellectually low-stakes question about the nature of their assessment, as Jeanne realises “they’re just babies after all”. Rivière also captures the sense of inadequacy fuelled by painful small talk between colleagues around research topics. Such people literally eat up her speech bubbles while bombarding her with theirs.

It’s so bad that Jeanne literally holds up a mask to converse with a peer, while putting a gun in her mouth behind it. While she borrows book after reference book, she gets little work done. Her initial drive is no match for the temptation of procrastination. This is embodied by the visual representation of her thesis, drawn as a warped set of buildings, which later take on a monstrous, kraken-like form. 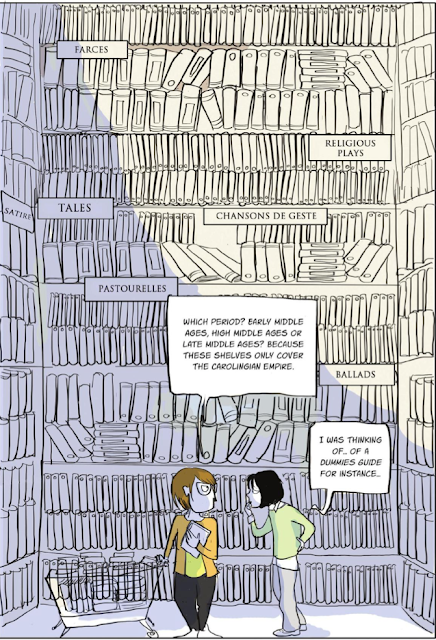 For the students, the drive to succeed literally changes them forever, and is a kind of unique trauma inflicted on their bodies, as well as their brains. The first PhD students the reader meets are overworked and feel purposeless. One student is pictured visiting a shrink, because they “feel like a fraud”, yet another nod to impostor syndrome. The more seasoned students look disturbing. Overcome with physical and mental fatigue, they look like the undead.

Their resignation is indicated by speech bubbles that drip downwards like melted wax, as if they will fall off the page. At various points in the text, we see Jeanne’s ID from over the years. The image of her in her final year resembles the after picture of a serious drug addict.

Through the point-of-view shifts in the text, Rivière demonstrates the often divergent concerns and experiences of the side characters relative to Jeanne. These uninterested professors, lazy doctoral officers, and oblivious loved ones curb and curtail the passion of young researchers. They ensure that the PhD quest is a maddening one, and Jeanne is discouraged by them time and time again. Rivière uses these characters to vividly frame the unglamorous and thankless portrayal of the path to academia.

For student readers, the actions of these characters may feel so familiar at times that they may just invoke the image of their real-life counterpart. For example, we all know a Pauline, Karpov’s teaching assistant, a teacher’s pet who make overbearing jokes with the professor and feel that exam grades give a “good idea” of one’s “true intelligence”.

Advisor from hell
Krapov, Jeanne’s supervisor, represents the indifferent, problematic academic more interested in securing grants than listening to a student’s ideas. Despite being a visionary on Kafka, he has hardly any interest in Jeanne’s work. He offers her some generic improvised remarks in their first meeting, and essentially, no feedback: “It would be wrong to constrain you with limiting directives at this point”.

This scene is humorous due to the dramatic irony Rivière created by the shift in points-of-view with Krapov and Jeanne’s thought bubbles. It also exposes an archetype of academia – the bad advisor. This is someone who will not help you develop your thinking at all. Such critically absent advisors leave the burden of a good thesis solely on the shoulder of the student, adding to their woes. This novel navigates these tensions with its ironic moments, like the one where Jeanne is drawn as a puppy crying for Karpov’s attention.

For anyone undertaking an intensive academic project, Notes On A Thesis should be required reading. It is a first-of-its-kind look into the deep personal and emotional toll of undertaking an academic endeavour like the PhD dissertation. At the same time, the themes will be familiar to all, for each of us has been Jeanne at some point in life – plagued by self-doubt, slaughtered by deadlines, hounded with questions by loved ones who don’t understand, and crushed under the massive weight of uncertainty. 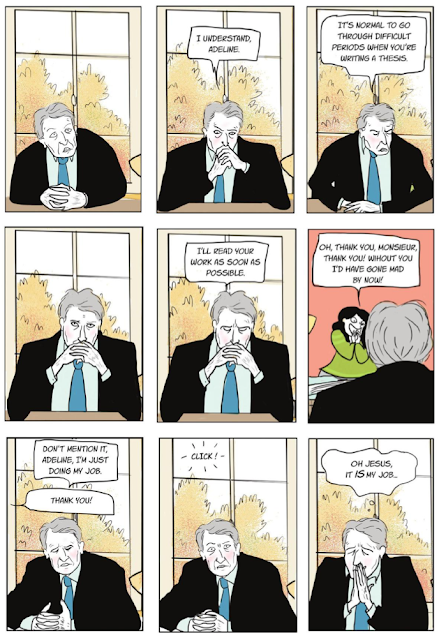 Rivière leaves the novel darkly open-ended, leaving the reader to deal with the political apathy located in newly issued funding cuts and to dream about “what’s next” in their own life. Even though Jeanne completes the thesis, the historical figures of Franz Kafka and Arthur Schopenhauer ensure that the reader does not interpret the ending as hopeful.

We are not left with an introspective notion or a world brimming with possibilities, but an image of the latter as an uncaring void forever implicated in the dangerous phenomenon running through it: the fight for one’s passion, the pressure to always have a plan, and the bane of answering the question: “What’s next?” – all of them sentiments in which Indian readers will definitely see shades of their own experience.