Aladdin review: A rip-roaring, matinee-style spectacle that turns out far better than expected

What could have been a cynical exercise in repackaging an old hit turns out to be an invigorating ride with lively performances, flamboyant musical numbers and clever special effects

Disney’s live-action remake of its 1992 animated feature is a rip-roaring, old-fashioned matinee-style spectacle that turns out far better than we had any right to expect. After the dismal debacle of his previous feature King Arthur, Guy Ritchie directs with such humour and flair that you half suspect that he must have been rubbing the magic lantern himself and getting some help behind the camera from the Genie. The film boasts lively performances, flamboyant musical numbers and clever special effects. It even has a political dimension, making some telling points about the treatment of women in patriarchal Arab societies.

Will Smith is both the narrator and the blue-skinned Genie. He plays the role with a cocky, wisecracking bravado that rekindles memories of him early in his career in The Fresh Prince of Bel-Air. He is brought out of the lamp by street thief Aladdin (Mena Massoud), the “diamond in the rough”.

Ritchie and his team don’t take too many liberties with their source material. If you’ve seen the original Disney movie or any Christmas pantomime version of the folk tale from One Thousand and One Nights, you’ll know exactly how the story unfolds. One of the pleasures of this Aladdin, though, is the way it also invokes memories of classic old Hollywood and British fantasies like the Douglas Fairbanks and Alexander Korda versions of The Thief of Bagdad. 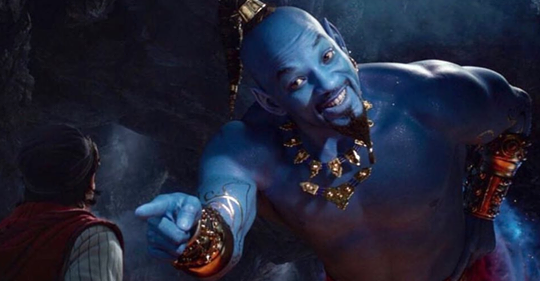 Massoud’s Aladdin is first encountered picking pockets on the streets of Agrabah. His accomplice is his pet monkey, Abu. He’s a likeable artful dodger type, always one step ahead of the Sultan’s soldiers. When a beautiful stranger (Naomi Scott) is accused of stealing bread to give to starving street kids, he intervenes to get her out of trouble. This prompts the film’s first big action sequence, a chase through the alleyways and across the rooftops of the city. He thinks she is the handmaiden to Princess Jasmine. In fact, of course, she is the princess herself, mingling incognito with her people to learn more about the dire circumstances in which they live.

Dutch actor Marwan Kenzari brings just the right measure of sneering, cunning malevolence to his role as the scheming Grand Vizier, Jafar. He has hoodwinked the Sultan into thinking that he is a loyal servant when his real intention is to depose him and seize the throne at the first available opportunity. Just as Aladdin has his monkey, Jafar has his pet parrot, Iago. Princess Jasmine, meanwhile, is accompanied wherever she goes by her “cat”, a huge, slobbering tiger with a knack for sniffing out evil.

A former “street rat” himself, Jafar plots to use Aladdin to help him procure the magic lantern. "You were born worthless, you will die worthless and only your fleas will mourn you,” Jafar, who has a nice line in insults, taunts Aladdin. “Steal an apple and you’re a thief. Steal a kingdom and you’re a statesman,” is another Machiavellian observation heard early on.

Once Will Smith’s Genie comes out of the lantern, the film quickly turns into a buddy movie. The Genie isn’t just Aladdin’s servant. He also quickly becomes his mentor, his friend and his dating companion. He takes an immediate shine to Jasmine’s handmaiden (Nasim Pedrad) and uses all his wiles to try to seduce her. The caveat is that his relationship with Aladdin will end as soon as his young master exhausts his three wishes.

This Aladdin has songs from the original Disney animated film and some new ones. The musical interludes occasionally risk interrupting the flow. Characters who’ve been racing around will suddenly stand still to burst into song and the momentum of the storytelling will be lost. We get to see Aladdin breakdancing. With a little help from the Genie, he even performs a backflip while his monkey at one stage performs a moonwalk. A magic carpet also features prominently – but attempts to make the carpet seem like a character in its own right soon founder. It’s very hard to believe that a piece of fabric has emotions.

Production and costume design are extraordinarily lavish. Whether in the Cave of Wonders or in the palace itself, every frame of the film is crammed with glittering visual detail. There are some impressively apocalyptical effects and locations range from the desert to the frozen limits of what appears to be Antarctica. The ending feels formulaic and a little anti-climactic. Disney’s storytellers aren’t able to add too many new twists to a story told countless times before. This, though, is an Aladdin made with tremendous verve. What could have been a cynical exercise in repackaging an old hit turns out to be an invigorating ride.