‘The goats are incredibly nimble when it comes to navigating the trees, though generally they just stand in one place, looking rather sick and forlorn’

Morocco’s famous tree-climbing goats may be part of a scam to attract tourists, according to a new investigation.

Farmers allegedly noticed how visitors were flocking to the roads outside Marrakesh to photograph the goats, which naturally climb on to the low branches of the Argania tree, and decided to capitalise on it.

British environmental photographer Aaron Gekoski said he had heard stories of farmers bringing in goats from the surrounding area and forcing them up into the trees so they can charge tourists to take a picture.

Gekoski discovered the alleged practice while researching a campaign to stop cruel animal tourist attractions all over the world.

“After seeing tourists’ interest in the tree-dwelling goats, some farmers decided to manipulate the situation for financial gain,” he said. 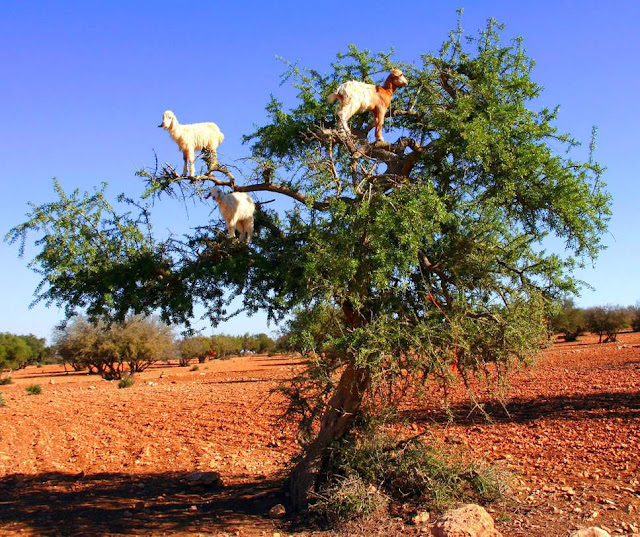 “I heard they even brought goats in from other areas, built platforms in the trees and now cajole the goats into the trees, charging tourists to take photographs.

“The goats are incredibly nimble when it comes to navigating the trees, though generally they just stand in one place, looking rather sick and forlorn.

“All the tourists who visited seemed blissfully unaware though and ‘oohed’ and ‘aahed’ before taking photos and selfies.”

Gekoski added that the goats are often rotated halfway through the day and substituted with other goats when they get tired.

“It’s incredibly hot work standing in a tree all day and generally the goats are in poor condition and very skinny,” he said.

While farmers may say they are just making the most of an available business opportunity, animal welfare charities are concerned that the practice is not in the best interests of the goats.

Ian Woodhurst, farming campaigns manager at welfare charity World Animal Protection, told The Independent: “Using goats as photo props in trees at tourist spots will likely cause the animals considerable stress and suffering, particularly if they are unable to find shade or access water.

“They could also injure themselves trying to climb down to escape the heat or quench their thirst. Sadly, this is another example of holidaymakers funding animal cruelty just to provide photo opportunities.

“Tourists must think about the welfare of animals involved in any kind of entertainment or holiday attraction, whether wild or domesticated, and stop paying for animals to be mistreated and abused.”

Geoffrey Dennis, chief executive of the Society For The Protection Of Animals Abroad, agreed, saying: “Exploitation of any animals is unacceptable, particularly when they are being used for entertainment purposes.

“These reports are worrying and tourists in Morocco must be aware that everything may not be as it appears.

“Whenever animals are being used for tourism activities, holidaymakers should think twice before handing over money. Ensuring that the welfare of animals is protected always has to be the main concern.”