Notre-Dame fire: Has too much money been given to rebuild it?

Since the fire that tore through Notre-Dame cathedral in Paris last week, donations have been pouring in from across the world to restore the structure to its former glory.

Ordinary people and billionaires have pledged at least €750m (£650m; $835m) in the 10 days after the main spire and roof of the building collapsed in a huge fire on 15 April.

One early estimate by French construction economists suggests that the donations may far surpass the cost of repairs. 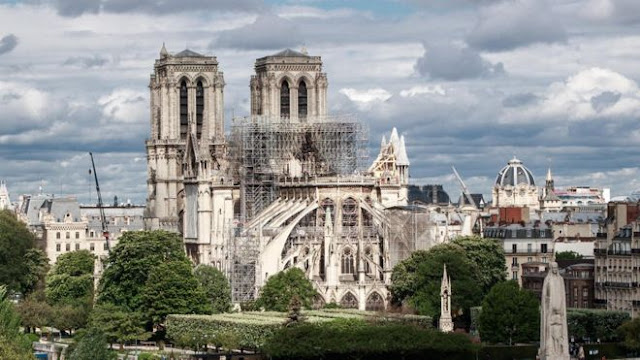 Amid the wave of goodwill and generosity, critics have argued that the money could have been better spent elsewhere.

But those collecting money for the repairs are urging people to keep donating, saying a price cannot yet be put on the work.

"We should not tell people to stop donating as we still don't know how much it is going to cost," said Laurence Lévy of French heritage group Fondation du Patrimoine.

What will it cost?
Untec, the national union representing construction economists in France, has estimated that the repair and restoration work on the Notre-Dame will cost a maximum of €600 million, excluding VAT.

"The cost is [a minimum of] around €300 million and the high level is around €600 million but we need to have two or three months to have the right cost," Untec president Pascal Asselin told the BBC.

The figures reached by the group included the cost of securing the structure; replacing the roof and framework; employing expert stonemasons and completing intricate restoration works, according to French news channel BFM TV.

An official estimate is yet to be put on the cost of the extensive work.

Because the cathedral is owned by the state, insurance money will not fund the work as the state is its own insurer. Some of the relics and artworks inside Notre-Dame were insured, as were contractors working on the building before the fire broke out. 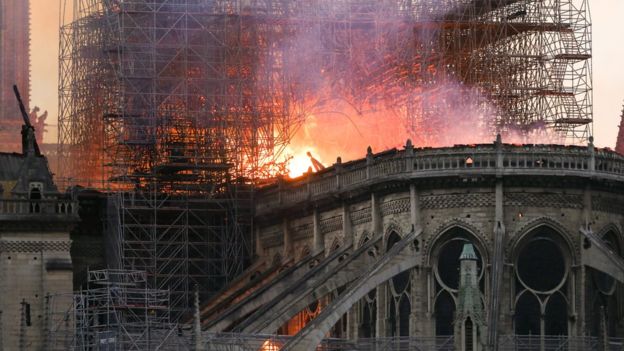 Could it be higher?
Experts contacted by the BBC were reluctant to speculate on how much the repairs may be.

"How do you price the unpriceable?" said Richard Woolf, an architect and expert in historic building conservation.

Alan Davies, another architect specialising in the conservation of historic buildings, said that while there were not many projects that would come close to the figure raised by donors, the complex restoration work would require the highest level of expertise.

"It costs whatever it costs… there can't be any cutting corners," he said.

Robert Read, head of art at London insurer Hiscox, has predicted the cost might go "north of €1bn", although insists it is far too early to give an accurate estimate without knowing what complications might arise.

Ms Lévy of Fondation du Patrimoine said people "should not rely on estimates made by people who haven't been inside the cathedral and haven't seen the damage."

"We haven't collected too much money as we don't know how much money will be needed," she said. "No figure has been confirmed yet. We are talking about art and handcraft."

Who raised the money?
Notre-Dame de Paris was built 850 years ago and has played a role in key moments of French history as well as capturing the imagination of millions around the world.

France's mega-rich have stumped up huge sums to restore the gothic architecture, with billionaires Bernard Arnault and Francois-Henri Pinault among the biggest donors.

"The amount of money that people have pledged is a reflection of the way people feel about historic buildings as fixed points in the landscape," said Alan Davies. "Notre-Dame is of national and international standing."

Others have donated more modest amounts.

"I heard about the Notre-Dame fire and wanted to help. I know it's not much but every bit helps," a nine-year-old British girl called Caitlyn wrote in a letter accompanying her donation of a few euros. 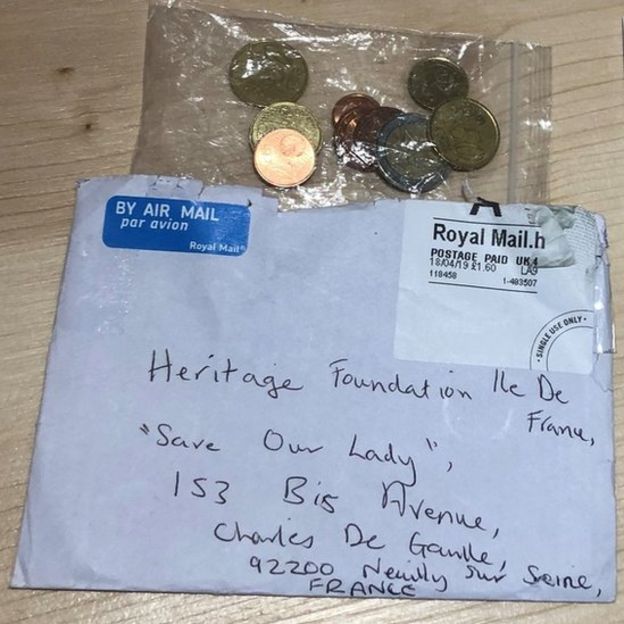 Some estimates suggest as much as €1bn has been raised but a French official said late on Wednesday that €750m had been confirmed.

Actress Pamela Anderson said she had attended a gala raising money for "children suffering in Marseille" this week when a "big surprise auction item" came up raising funds to rebuild the Notre-Dame.

Surely the children suffering in Marseille
could have used the 100,000 €
more than the church
that has already received
over a billion in donations
by billionaires.
— Pamela Anderson (@pamfoundation) 24 April 2019

"I hope they will reconsider and give to where it is needed," she added.

At the weekend, yellow-vest demonstrators complained at the ease with which corporations and wealthy individuals had raised money for a building but had ignored months of protests against the high cost of living.

Others have complained that the billionaire donors benefit from a 60% tax deduction in France.

Markus Renner, a Swiss-based marketing and brand reputation expert, said that companies had pledged too much too soon.

"I would not say that there is not a good intention behind it, but maybe they should have thought twice. How do they know how much is needed?" he said.

"I used to work within companies and my advice would always be to send a message that you're willing to donate, but depending on how much money is needed, not overreacting the way they did.

"It is a building, nobody died."

For others, however, the generosity shown towards the Notre-Dame was befitting of its history and status within French society.

"What happened to Notre-Dame was horrific but seeing the generosity that poured in from all over the world and from people of all religions was overwhelming," said Ms Lévy.