St Anthony's Church, the site of one of the deadliest Easter Sunday bombings in Sri Lanka, is renowned as a place of worship open to all faiths, but the attacks have shut its doors for now.

For the first time in its 175-year history, people are being turned away.

The road to the shrine in Colombo's Kochchikade district is a familiar one to many, who - regardless of their religion - would regularly come here to seek blessings.

Despite being a predominantly Roman Catholic church, its patron has acquired a reputation for being a "miracle worker". No request, no matter how large, small or strangely specific, is left unanswered by St Anthony, people say.

On Monday, however, a day after the bomb blast ripped through its entrance, things are very different. The attack here was one of eight across the country which killed 310 people and injured many more.

Police are fanned out near the turn-off to the church, marked by its distinctive large statue of St Anthony, mounted on a pedestal. The perimeter of the church itself has been cordoned off with yellow tape and is being guarded by armed security officers.


Despite this, a sizeable crowd is still gathered outside, veering as close to the perimeter as they dare, most just staring at the large white building. From a distance it looks untouched, but look harder and hints of the carnage that took place inside become more visible.

Near its entrance, half hidden by a wall, you can see bits of rubble and shards of glass. The clock on its left tower is frozen at 8.45 - the time the blast took place.

There were so many casualties here because such a large crowd had gathered. Even on a normal day, the church is filled with worshippers. For Easter Mass, the chief priest thought well over 1,000 people were in the congregation.

Scores are thought to have been killed at St Anthony's - it's not clear yet how many lost their lives.

Among those gathered outside the church is Prabath Buddhika. Although Mr Buddhika is Buddhist by religion, like many others, he is a strong believer in the power of St Anthony.

"My house is right here," he said, adding that he'd been attending the church since he was a child and gone along with his family many times.

Like many others, Mr Buddhika ran to the church after hearing the explosions. The carnage he saw there could not be described, he says, but people fearlessly came forward from around the area in order to help.

Among them was Peter Michael Fernando, a Catholic who lives close to the church. He was asleep when the blast occurred, he says, waking up after his "bed shook" with the force of the explosion. He ran towards the church after seeing plumes of smoke rising into the sky.

"There were bodies and parts of bodies everywhere. I saw there were two people who were still alive so I helped them to an ambulance. I was weeping."

Mr Fernando says what stayed with him was the number of children he saw among the dead and injured. "They were screaming, they were bleeding. We tried to help as many as we could. I carried a little girl into one of the vans - she had lost a leg," he said, breaking down again.

A little distance away stands Anuja Subasinghe, a nurse. She has been staring at the church for a long time.

"This church is for those who carry unbearable sadness - it gives them solace," she says with tears in her eyes. "Who would do something like this? Why would they do this?" 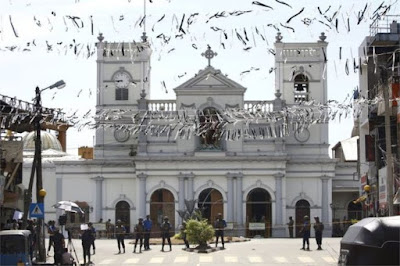 She couldn't come for Sunday's Easter Mass because she had to report for duty, but on Monday morning she felt she needed to be there for the church.

"My husband died 12 years ago and the only thing that got me through that terrible tragedy was this church," she says. "I didn't need any other man. St Anthony was enough for me."

Like Mr Buddhika, Ms Subasinghe was born a Buddhist, but converted to Christianity after discovering the church.

So what is it about this church and St Anthony in particular that has captured the imagination of so many people?

According to Father Leo Perera, a parish priest who serves nearby, part of it is to do with the fact St Anthony's Church has always been associated with miracles.

In fact, its very origin has been attributed to one.

According to local legend and the written history of the archdiocesan archives, St Anthony's Church was built by a priest from Cochin in southern India, named Father Antonio. He secretly practised Catholicism during the Dutch rule of Colombo in the 18th Century, although it had been named a proscribed religion.

He was able to build the church, the legend says, after performing a miracle. The locals had come to him in panic after seeing the sea rising and asked him to pray for it to recede. He did, and the sea not only receded, but a sand bank suddenly emerged from the waters. So he planted a cross there and built a small mud church, in which he remained until his death.

The other reason, Father Leo says, is the fact that many people have testified that the church has answered prayers and restored faith.

"Everyone who goes there comes away with the happy feeling that their prayers have been heard," he said, adding that on special celebratory feast days, the church was always full of grateful people who had come to give offerings as thanks for having their prayers heard.

But what next, I ask him? Will the attacks erode people's faith in the power of this church?

"Absolutely not," he says with emotion.

"You cannot keep people away from here just because of something like this. They will keep coming back because this is the time they want the presence of God in their life. There is no way this will affect the power of this church and the faith of its believers."

This sentiment is echoed by Mr Buddhika. 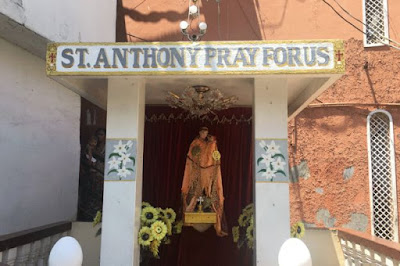 "This is no ordinary church. Whoever did this didn't know what they were messing with - they cannot simply get away with something like this.

"They will pay for this over generations."

And this is because St Anthony's is so much more than just a place of worship. It is a symbol of Sri Lanka's plurality and tolerance. A reminder that in a country, still bruised by the memories of a brutal civil war and inter-religious violence, its diverse communities have traditionally lived together peacefully and embraced each other's beliefs and differences.

That perhaps explains why so many of them still came together to stand in front of the church, to express sadness and horror at what took place within.

In its darkest hour, the church continues to be a symbol of hope - with many Sri Lankans choosing to stand together despite the hatred that has unfolded among them.