The ‘green dimension’: Inside the lives of California’s marijuana trimmers

Each autumn, young people flock to Northern California to find temporary work pruning cannabis bound for the state’s legal dispensaries, or black markets as far away as the East Coast.

Tucked into the forests of Mendocino County, accessible by a two-lane road that winds through hills of golden grass abundant with rattlesnakes is the small town of Covelo, where hundreds of seasonal workers converge every year, eager to help harvest the region’s most lucrative cash crop — marijuana.

These workers, known as “trimmigrants,” patiently cut off the shaggy leaves and brittle stems of marijuana buds, trimming each one into a compact green nugget primed for bongs and brownies.

“Some people don’t even know that a bud has to get trimmed up,” said Allen Kuehl, 27, as he sat snipping away at a pile of marijuana buds one recent morning. “Maybe they think there’s some perfect bush out there, but you’ve got to work at it. Buyers want single gram nugs that look like they could be poured out of a cereal box.”

Trimming weed is a tedious daily grind, requiring hours of manual labor. Once beautified, the buds are bound for California’s legal dispensaries, or smuggled to illicit markets as far away as the East Coast. Mr. Kuehl is among thousands of mostly young workers who spend several weeks each autumn with trays of marijuana on their laps, toiling away in Northern California’s so-called Emerald Triangle, a trio of counties known for growing much of America’s cannabis. 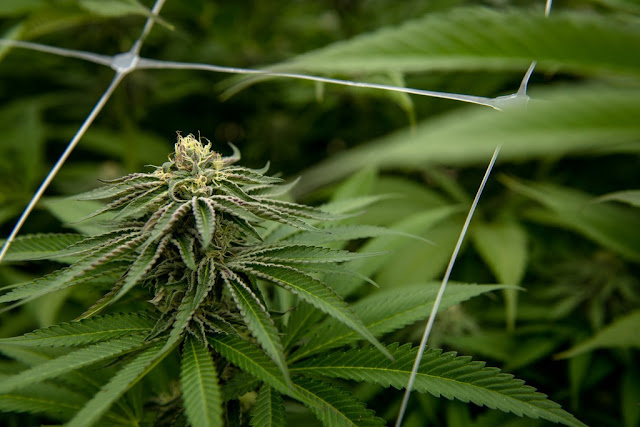 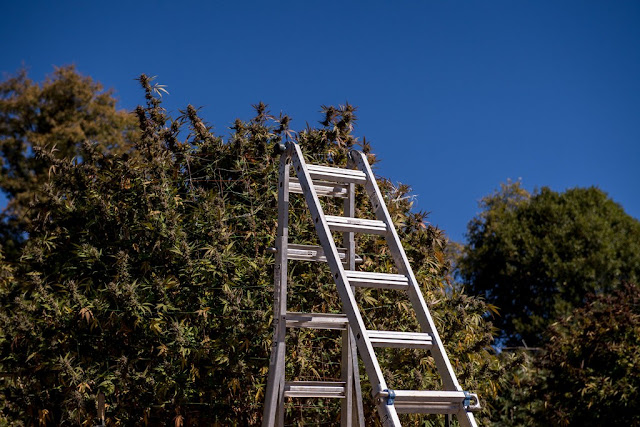 “You just stand in front of the library and farmers show up asking if you’re looking for work,” said Julian, 28, an Argentine who did not want to be fully identified because he was working in the United States illegally. He had hitchhiked into Covelo five days earlier with a tent and a sleeping bag, and had already found a job trimming for around eight hours a day.

But trimming weed is not as profitable as it once was. The legalization of recreational marijuana in California and other states across America has helped flood the market with ever cheaper supply, growers say. And as the legal risks of cultivating marijuana have declined, competition from both corporate and black market farms has increased. A decade ago, marijuana sold for around $2,000 a pound, but growers said they are now lucky to get $500, and that means there is less money to pay for trimming.

“More and more people are growing weed and driving prices into the ground,” said A.J. Cook, 27, who has traveled from nearby Chico to Covelo for seven seasons and has seen the going trimming rate drop to $125 from $250 per pound. “It’s got me thinking: am I trimming anymore for the money or for the lifestyle?”

Still, as trim scenes go, his work space was pretty cushy. Seated on a living room couch, he hunched over a bin of weed, dropping each manicured bud into a large plastic bag. Nearby, Mr. Kuehl was breaking down marijuana branches into smaller pieces and clipping away the leaves, his hands covered in surgical gloves. (He goes through about 10 pairs a day.) A fellow trimmer was stretching on a blue yoga mat, while a few dogs lazed in the morning sunshine. The room reeked of marijuana, which filled bags in the pantry and, in the garage next door, dozens of tote bins named for various strains like Lady Lemon, Jah’s Cookies, Afjazz and Thai blueberry.

Trimmers get paid by weight, so each morning, the race is on to prune as much marijuana as possible. Mr. Kuehl said he averages nearly two pounds a day — about nine hours of trimming — worth about $200. “You’ve got to commit to the chair,” said Mr. Kuehl, explaining how trimmers endure the day-in, day-out monotony from October until December, and possibly longer. 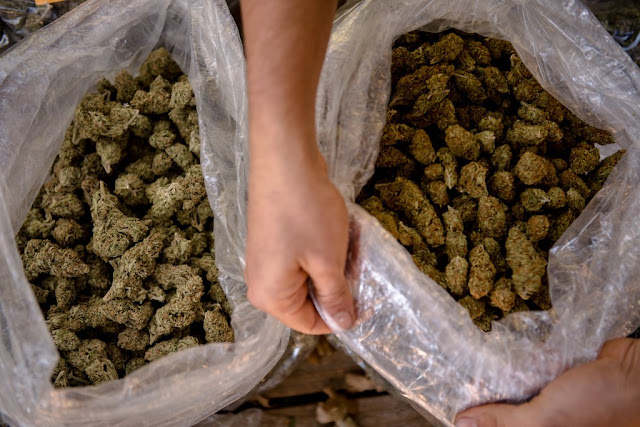 Sometimes, if they are lucky, trimmers reach a hypnotic state of focus while pruning the seemingly endless harvest of cannabis.

“We call it the ‘green dimension,’” said Kelly Zimmerlee, 27. “When you have the right weed, the right people, the right vibe, and bingo, you don’t think about anything else and just do your thing for hours.”

To stay energized — and sane — the farm’s trimmers maintain a steady diet of yerba mate tea, music, podcasts and audiobooks, including all 12 hours of J.R.R. Tolkien’s “The Silmarillion” and the entire canon of Terence McKenna, the American philosopher who advocated the use of psychedelics plants.

And for those wondering: No, they don’t get high on the job. “I’m not a productive stoner,” Mr. Kuehl said.

Some trimmers grumble about “cherry pickers,” who select the largest cannabis buds for themselves, leaving the others with smaller specimens that won’t amount to as much weight. And don’t even think about blasting heavy metal. “You want to keep spirits high,” Mr. Kuehl said. “Otherwise you can have drama pretty quick if you’re trimming for 12 hours a day.”

The combination of marijuana and close quarters has occasionally burst into violence. Seven trimmers were charged with taking part in the brutal murder and robbery of a Mendocino cannabis farmer in 2016. In June, a New Hampshire man was found guilty of beating a fellow itinerant laborer to death at a Covelo marijuana farm, after a disagreement about the victim’s dog.

In many ways, Covelo is the Wild West of weed. The town is an hour and a half from the nearest police station. Marijuana groves are pretty much everywhere, in greenhouses concealed within tall wood walls and hidden behind sheets of black tarp on homesteads nestled in the surrounding hills. Yet one black market pot grower, who asked not to be identified to avoid arrest, said an undercurrent of paranoia ran through the town’s main industry, in part because of the fear of getting robbed. “I have cameras and security alarms, but when you’re out in the middle of nowhere, who you going to call?” he said. “This place is kind of lawless.”


If there is one concern that unites growers, trimmers and law enforcement agencies, it is Mexican drug cartels. In recent years, the criminal groups have illegally cultivated millions of marijuana plants on public and private lands in the region. To sustain the illicit operations, the authorities say the heavily armed cartels often steal water from rivers and streams, and poison the environment with toxic fertilizers and pesticides while leaving behind hundreds of thousands of pounds of trash. The authorities have spent millions of dollars trying to eradicate the cartel operations, which continue to plague the area and its residents.

But trimmers say they have more to worry about than cartels.

Nicole Tamaura, 23, a Mexican-American from Tijuana who started trimming five years ago, the last three in Covelo, has her share of horror stories. As she smoked a fat joint outside the library one afternoon, Ms. Tamaura recounted stories of unscrupulous growers she said refused to pay her, of a police officer who she said held a gun to her head, and of frequent sexual harassment, an ordeal made worse by the remote nature of the work. “When you’re alone out here as a girl it’s really scary,” she said. “I know girls who’ve disappeared.”


This year, Ms. Tamaura and her boyfriend were trimming together, sleeping in a shipping container the grower uses to hang drying marijuana. Sure, they wake up with rashes and have to trek to the river every few days to bathe, but the accommodations are better than the meat locker she said she slept in during a previous trim job.

Ms. Tamaura said she loves trimming in Covelo, where she can earn thousands of dollars a season and has met young people from as far away as Ethiopia.

“It’s a magical little stop for the universe,” she said.