Homeless at Christmas: 'How will Santa find us?'

One in every 103 under-18s is officially homeless, a 59% rise in five years, housing charity Shelter said.

One mother-of-three said her children were preparing for Christmas in a one-room bed and breakfast for the second year running.

Councils said a lack of housing had left them "struggling to cope".

Using government statistics, Shelter said the number of children in temporary accommodation in England had increased 62% in five years and 36% in Scotland.

The charity estimated 1,524 children in Wales were in temporary housing, based on figures for the overall number of households.

It said some B&Bs were "not places for children" because of people reporting problems with rats, children having to share beds with family members and having to "play in dirty public corridors".

'Will Santa come if we're all in one room?'


Carly Stutter's three children have still not opened some of the presents they got for Christmas last year.

She says they are so short of space in their B&B single room she had to leave a lot of their possessions in a friend's shed.

Miss Stutter, 30, from Croydon, has been living in hostels and B&Bs for more than two years with daughters Paris, 11, and Morgan, 10, and son Archie, six.

"It's going to be a shambles spending another Christmas like this," she said.

"Morgan and Archie ask how Santa is going to find us because we've been moving and 'how is he going to get in because we're only in one room'.

"I tell them he still comes to people even if they're only in one room."

The girls share a bed but Morgan prefers to sleep on the floor on a blanket so she has some space.

Miss Stutter shares a bed with Archie and said she turns everything off and lies on the bed in the dark after about 20:30 GMT so the children can sleep.

They left their privately-rented home after the landlord put up the rent from £1,200 to £1,500 a month, which Miss Stutter could not afford.

The family moved to a series of B&Bs but this meant they had to give up their pet dog, 11-year-old Devious. He has been re-homed.

Miss Stutter described one property as "infested with rats".

"If I didn't have the kids, God knows what I'd do," Miss Stutter said. "The kids keep me going, they keep me strong. But enough is enough now."

Croydon Council said it had started several initiatives to increase local housing supply, including flats for vulnerable rough sleepers and buying more than 150 family homes for households in temporary accommodation. 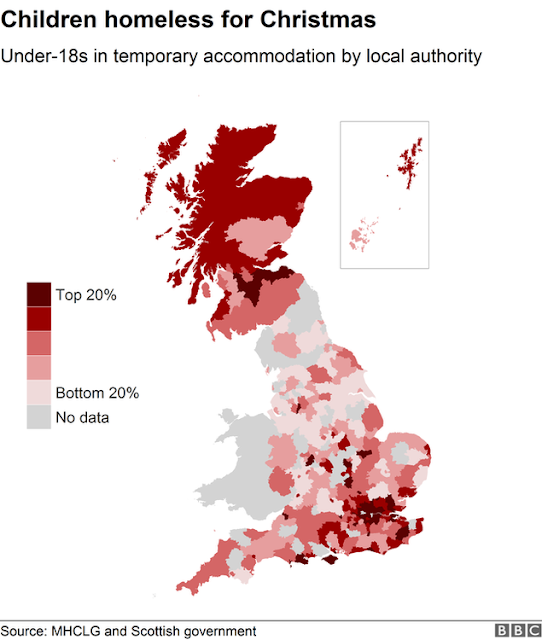 In England the number of children in temporary accommodation is at its highest for 11 years.

Greg Beales, director of campaigns at Shelter, said: "The increasing number of children hidden away in hostels and B&Bs is enough to make anyone's heart sink. These are not places for children. We hear about cold, damp - even rats.

"Young children are sharing beds with multiple family members, trying to play in dirty public corridors, and having to leave their block in the middle of the night to use the bathroom."

London boroughs had the highest proportions of children in temporary accommodation. 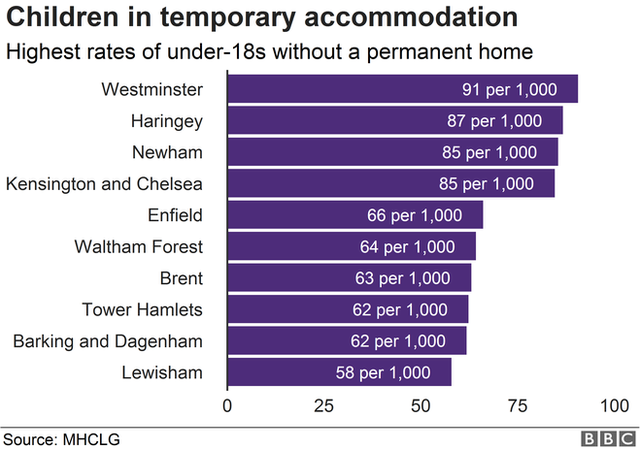 Westminster City Council, which had the highest rate, put the problem down to high rents and higher house prices.

Councillor Andrew Smith said: "We are building 1,850 affordable homes by 2023 and just last week we launched a new Housing Solution Service for families, which will focus on prevention and providing expert advice before people reach crisis point.

"By engaging early we're confident we can help more people, cutting out the unimaginable pain and stress that people go through when they lose their home."

A spokesman for the Local Government Association (LGA) said: "Funding pressures are combining with a lack of affordable housing and rents continuing to rise above household incomes to leave many councils struggling to cope.

"Homelessness continues to rise and the people caught up in this crisis can't afford for us to wait,"

He said the increasing use of temporary accommodation was "financially unsustainable" for councils as well as "hugely disruptive" for families.

The LGA wants councils to be allowed to keep all the money from housing they sell under right to buy laws so they can can invest in building more homes. 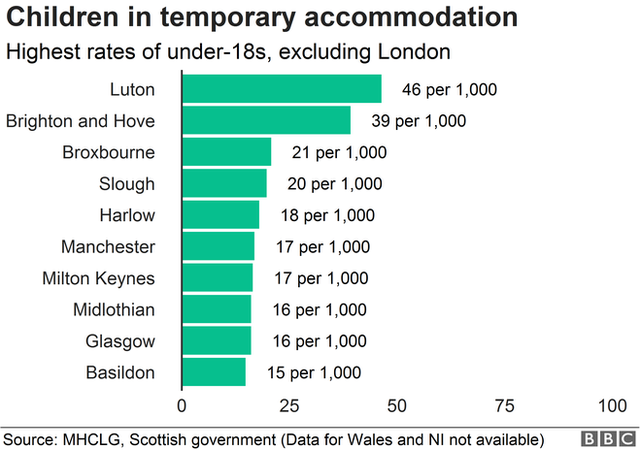 Minister for homelessness Heather Wheeler said: "No family should be left without a roof over their head, especially during the winter months, and we are working to ensure all children have a safe place to stay.

"Councils have a duty to provide temporary accommodation for families with nowhere to go.

"We're providing more than £1.2bn to tackle all forms of homelessness, including amongst children, and introduced the Homelessness Reduction Act to ensure people at risk get help quicker.

"But we know we have more to do to tackle homelessness, and we will."